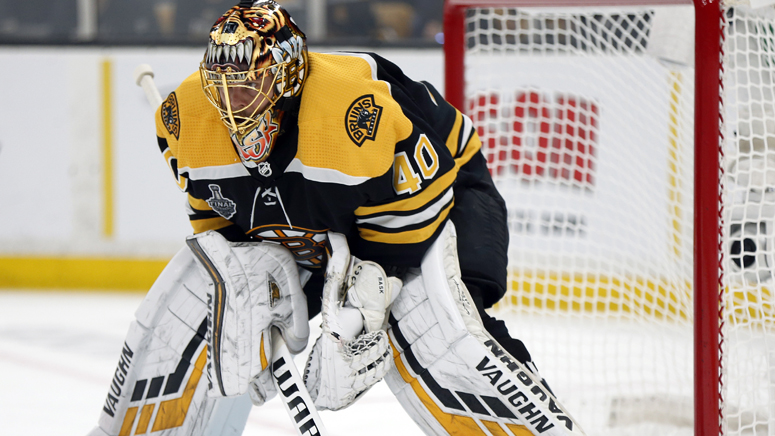 BOSTON (AP) — It didn’t take very long for the Boston Bruins to wash away the sting of last season’s disappointing finish on home ice.

Tuukka Rask stopped 31 shots in his 46th career shutout, leading the Bruins to a 3-0 victory over the New Jersey Devils to win their home opener on Saturday night.

Brad Marchand, Joakim Nordstrom and Patrice Bergeron all scored in the Bruins’ first home game since losing 4-1 in Game 7 of the Stanley Cup Final against the St. Louis Blues in June.

“It’s behind us — we’ve got a new year,” Bruins center Sean Kuraly said. “Everyone’s got a clean slate this year. We’re just trying to play good hockey. Last year is all gone, and we’re looking forward.”

Boston hasn’t shown any signs of a Stanley Cup Final hangover, winning four of its first five games. The Bruins took three straight on the road before a 4-2 loss at Colorado on Thursday night.

“We’re starting to figure it out a bit now,” Marchand said. “A little bit of a different training camp this year, and a different feel. … There’s going to be a little bit of rust there, but I think we’re feeling good.”

Cory Schneider stopped 29 shots for the Devils, who are 0-3-2 after playing three of their first five on the road.

Wins were hard to come by last season for New Jersey, which finished with the second-fewest points in the Eastern Conference. The Devils had a 11-27-3 road record a season ago, but were 20-14-7 at home.

“A good homestand is somewhere you can gain momentum,” said Schneider, whose team begins a season-high, six-game stretch at home on Monday. “We need to get a win, get some confidence, and hopefully it snowballs from there.”

Marchand put the Bruins on the scoreboard 3:33 in when he skated to the high slot and fired a wrist shot to beat a screened Schneider.

Nordstrom doubled the lead with 8:38 left in the period. Kuraly corralled a rebound in the slot and backhanded the puck to Chris Wagner, whose pass in front of the crease was finished off by Nordstrom.

Bergeron made it 3-0 on a power-play goal with 46 seconds left in the second period, poking in a rebound of Marchand’s shot from the right circle.

Rask turned away a handful of Devils’ scoring chances during a second period mostly controlled by the visitors with a 16-9 shots advantage. He also stymied New Jersey in the third to pick up his first shutout of the season.

NOTES: Marchand recorded his 300th NHL assist on Bergeron’s goal. … Former Bruins D Ted Green died Tuesday at age 79, the team announced Saturday. Green, nicknamed “Terrible Ted,” spent his first 11 NHL seasons with Boston and helped the team to Stanley Cup titles in 1970 and 1972. … Devils D Andy Greene (upper body) was placed on injured reserve Friday. New Jersey coach John Hynes said he would have a better idea about Greene’s status on Sunday. D Matt Tennyson was recalled from Binghamton of the AHL. … Longtime Bruins public address announcer Jim Martin, who worked his final game Saturday after a 26-year tenure, was honored on the video screen and given a standing ovation during a first-period stoppage.