‘The Bruins is basically tattooed on me’: Former Bruins head coach Bruce Cassidy surprised by firing 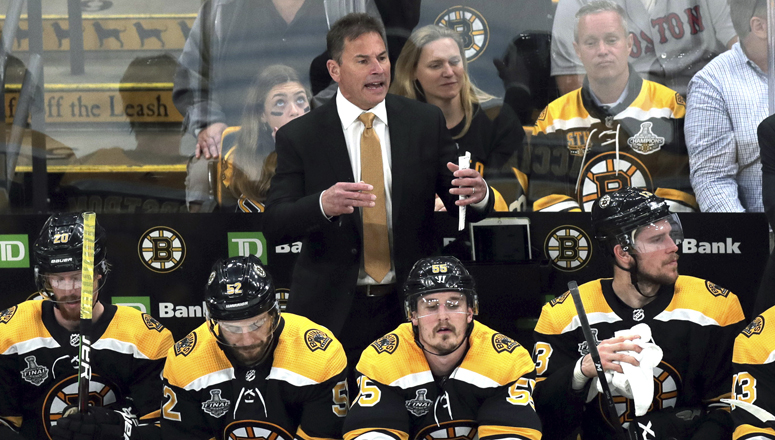 Boston Bruins head coach Bruce Cassidy shouts instructions from the bench during the first period in Game 1 of the NHL hockey Stanley Cup Final against the St. Louis Blues, Monday, May 27, 2019, in Boston. (AP Photo/Charles Krupa)

Former Bruins head coach Bruce Cassidy addressed the media for the first time since General Manager Don Sweeney announced Monday that the former Jack Adams Award winner would not return in the role for the upcoming season. According to Cassidy, he was caught off guard by the dismissal after being reassured of his job security weeks ago.

“The end-of-the-year meeting was that I would be coaching on this year of my deal,” said Cassidy. “Sometimes there are talks after every year of — right away, there are coaches let go, there are extensions, there’s status quo. So that was the message — it would be status quo.”

Cassidy’s firing also hit closer to home than some professional firings in the NHL sphere. The 57-year-old had grown up a fan of the Bruins and had served in the organization since 2008.

“I had term on my deal and I wanted to come back and coach the Bruins,” said Cassidy. “The Bruin is basically tattooed on me. That’s the difficult part.”

Cassidy made the playoffs in each of his six years on the Boston bench, guided the team to the Stanley Cup Final in 2019, and was named the recipient of Jack Adams Award, awarded to the league’s best coach that season, after the Bruins won the President’s Trophy for having the league’s best record in 2020.

Cassidy will depart Boston touting a 245-108-46 record as head coach. Those numbers will not tell the full story of Cassidy’s 2022 season. Although the Bruins bowed out to the Carolina Hurricanes in the first round, it was a flawed and depleted roster that Cassidy coached through a seven games with the Metropolitan Division winner. Although some would say that the roster construction was more at fault for the Bruins’ early playoff exit than the coaching, Cassidy pushed back on the notion that he was a scapegoat.

“Raw deal? I don’t know about that,” said Cassidy. “I feel I did my job. We can always get better.”

Cassidy alluded that he will be back behind an NHL sooner rather than later after mentioning he’s already had contact with prospective teams.

“I want to get back to work. Hopefully, it’s a really good fit– best fit possible.”