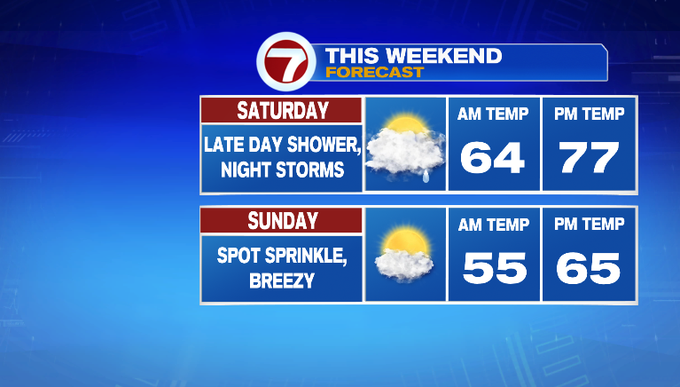 Temperatures will be falling through the weekend — returning to fall-like temperatures by Sunday with highs into the 60s behind a cold front. That cold front earlier today swept across the Midwest, dipping temperatures into the upper 50s to low 60s which will be heading our way by the second half of the weekend.

Today was another warm day across the region. We didn’t quite hit 70 in Boston due to the onshore breeze, but areas away from the coast surged into the mid to upper 70s.

Tonight, under mainly cloudy skies, temperatures will remain mild with lows into the upper 50s to low 60s.

The clouds stick around tomorrow however highs will still stretch into the mid 70s.

We have a chance for a late day shower ahead of the main event — that main event being a line of showers with embedded thunderstorms Saturday night likely after 8pm. These showers and thunderstorms will be along the cold front and will sweep across the area from west to east, so the thunderstorm threat will likely be closer to 11pm for areas east.

With the thunderstorm threat, the Storm Prediction Center has placed much of southern New England under a marginal risk for severe storms, with the main threat being gusty to damaging gusts. With the trees fully leafed this time of year, with the gusty winds, tree damage is possible tomorrow night.

Speaking of gusty winds, the foliage may be impacted for the second half of the weekend. As the winds pick up Saturday night, the trees will likely lose a lot of their leaves.

As the cold front departs early Sunday morning off the coast of the Outer Cape, a few lingering showers are possible along the Cape Sunday morning.

A few sprinkles could pop up Sunday afternoon, otherwise we’re looking at partly cloudy skies and highs closer to normal, in the mid 60s.

For the Patriots game Sunday, temperatures will be in the 60s, falling back into the upper 50s by the end of the game.

Looking ahead to Monday for Game 3 of the ALCS, at first pitch, it will be crisp and cool at Fenway with temperatures in the low 50s.

Fall weather sticks around through Tuesday and Wednesday before we climb into the upper 60s by the end of the week.