90s Continue To Start The Week 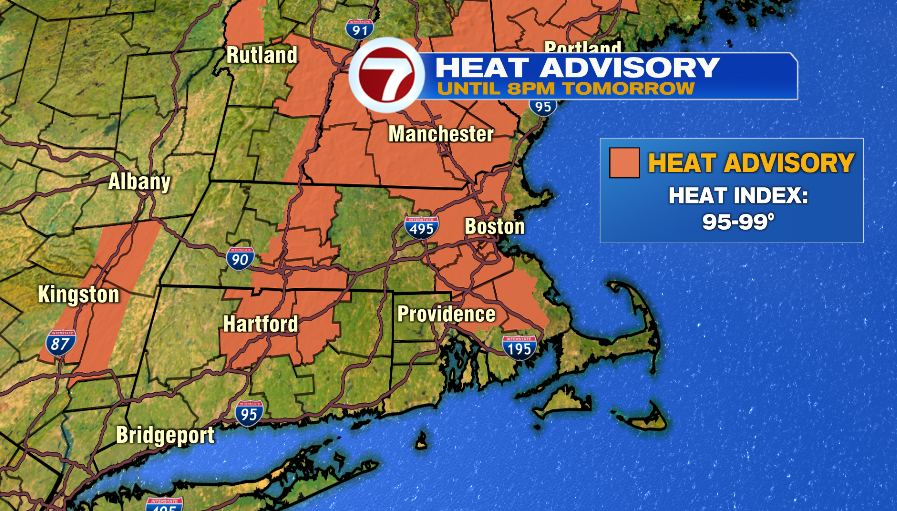 A Heat Advisory is in effect for parts of Massachusetts and southern New Hampshire until 8PM Monday. Areas under the advisory (in orange shading above) will see highs in the mid 90s on Monday and with a bit of humidity it will feel a few degrees warmer in the upper 90s. This will be the third consecutive day in the 90s, making it the first heat wave of 2021. The day will be mainly sunny with the chance for an isolated downpour after 3 PM.

Tuesday remains hot with highs in the low 90s. It will also be a bit more humid compared to the weekend and Monday. Skies are partly cloudy and there is a 40% chance of afternoon storms. There could be an isolated downpour around lunch time, but the better chance for storms is after 3 PM.

Wednesday is warm and still muggy. A cold front arrives in the afternoon, but before it does, highs reach into the upper 80s. The front could spark up a few afternoon storms.

Expect a mix of clouds and sun on Thursday with cooler highs in the upper 70s. The week ends with lots of clouds on Friday and temperatures are close to average in the low 70s.