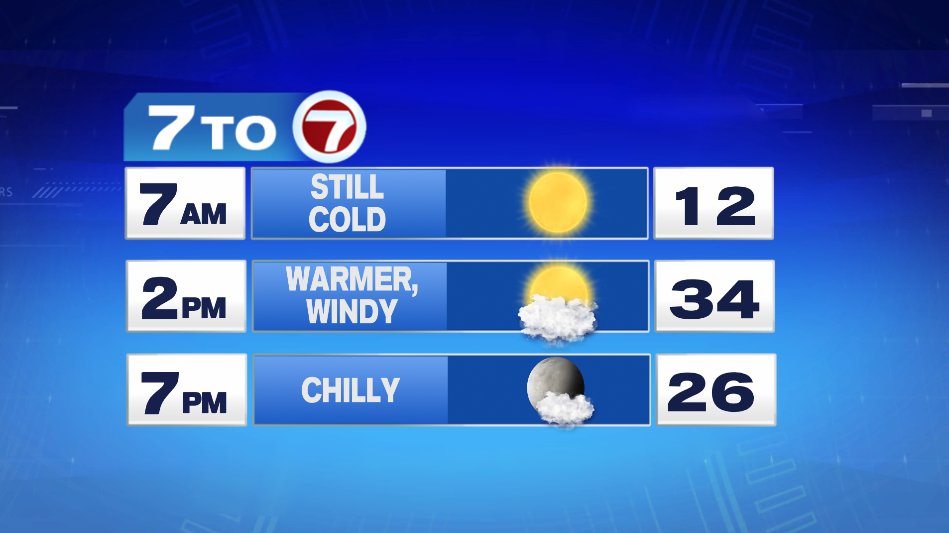 It’s another cold morning out there but we’re already seeing improvement. Temperatures actually bottomed out last night BEFORE midnight! So the midnight temperature will be the low for today. Temperatures have been climbing ever since. Ok, climbing might be a stretch… inching up since midnight is more like it.

It’s still cold as you step out the door but our official low in the single digits will climb to the low teens by the time many of us step outside. Wind chills will still keep the feels like temperatures near zero but it’s better than yesterday. As we get into the late morning, southwest winds are going to kick in and that will send temperatures to the upper 30s! And some of us may end up with above average highs despite the cold start.

Upper 30s will be common today with some towns in Southeast Mass touching 40 degrees.

Mild air will be with us to close out the week with most of us climbing to the 40s on Thursday. Friday will be cooler but still mild. There’s a storm offshore and a majority of us will stay dry. That said, those on the Cape will likely see a few showers as the storm just grazes the area as it passes by. Behind that system, it’s another blast of cold for the weekend.

Of the weekend days, Sunday is by far the pick. Sunshine will be the around both days. There will be some high clouds around Sunday, but temperatures will be warmer and winds will be less. Saturday will likely stay near and below zero for wind chills all day.

The last two mornings have been the coldest two mornings we’ve had all winter. This weekend, both Saturday and Sunday morning will be added to the list.

Monday looks to be our next round of wintry weather. We’ll call it “wintry weather” for now because the storm is still five days out and we all know there will be changes in the track between now and then. That said, do not take the future radar in the image below as set in stone. IT WILL CHANGE. But here’s a few highlights of Sunday night/Monday and what we know and don’t know.

WHAT WE DON’T KNOW:

Of course we’ll have updates on this all week & weekend.