Cloudy With A Few Sprinkles Today, Much Colder Tomorrow With Snow Showers SE MA and the Cape/Islands 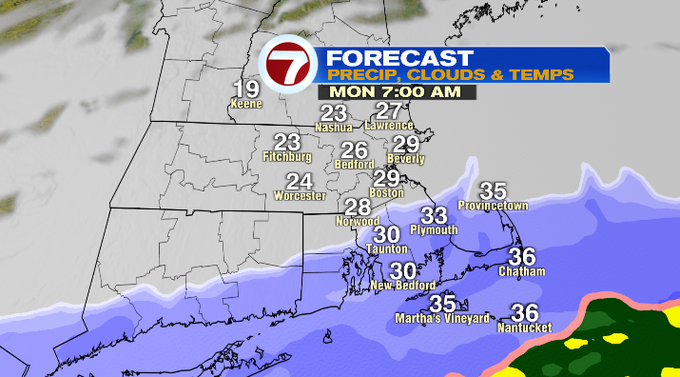 It’s another foggy start with some patchy drizzle and we’ll see those overcast skies sticking around for our Sunday. Temperatures will be in the 40s for much of the afternoon before they start to nose dive tonight.

If you’re heading to the Pats game today, some patchy drizzle could be in the vicinity of Gillette Stadium around kickoff, otherwise it will be cloudy with temperatures falling through the 40s.

Tonight, winds pick up and temperatures dive into the upper teens northwest, upper 20s for Boston and into the low 30s for SE MA and the Cape and Islands.

For tomorrow morning, a system will slide to the south of southern New England, but with the colder air in place, we’ll see snow showers along the South Coast and the Cape and Islands starting around 6am Monday morning. That leading edge of snow could slide as far north as Boston by mid-morning, and then slide back south through midday before moving off the Cape by mid-afternoon.

With the Cape & the Islands seeing the snow for much of the morning and through midday, snowfall totals will be around 1-3″, while SE MA will be around a coating to an inch.

We also have the astronomical high tides today and tomorrow, so minor coastal flooding is possible around high tide.

With the cold air in place along with windy conditions, wind chills Monday will be in the teens from much of the day.

Although the bulk of Monday will see the clouds again, it’s looking promising that we’ll see a clearing of the skies from west to east around dinner time Monday and that clearing will be with us Tuesday.