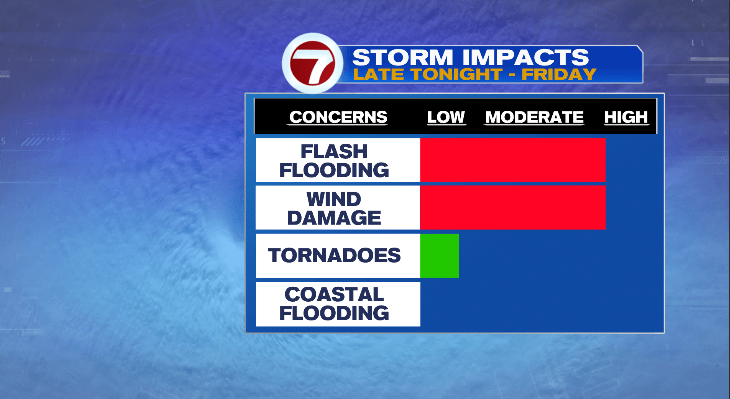 Well you’ve probably heard by now we’re getting ready for a land falling tropical storm here in New England. Right now Tropical Storm Elsa is in Virginia and barreling toward New England. The official track from the National Hurricane Center pulls the storm right into Buzzard’s Bay and the Canal. At this point, where it actually makes landfall is just for stats. Everyone in Massachusetts is in line for wind and rain.

As mentioned, wind and rain are the biggest threats and impacts with Elsa, though we’ll also have to watch for a few isolated spin up tornadoes as well.

Let’s start with the timing

This storm is centered on the morning hours of Friday. Rain will start early Friday morning and really pick up in intensity mid and late morning. We’ll have a wall of water come in late morning and last for a few hours. This is a fast moving storm so it will exit by early afternoon on Friday. While I’m not ruling out a spot shower or downpour tomorrow afternoon, we’ll likely see the sun come out before the day is over tomorrow! Below is a timeline of Elsa: 7am, 10am, 2pm, and 8pm.

The timing of each individual impact is also in the morning, but some threats are ahead/behind of others.

Get ready for tropical rains

Rain is probably what will impact the most of us. Not only is rain an issue with tropical systems because they’ll drop a lot of it, but we’ve already had an incredibly wet July so there’s not much room for this rain to go. For that reason a flash flood watch is in effect for virtually all of us.

We’ll likely see widespread 2-4″ of rain but some towns may end up with closer to 6″ of rain as Elsa moves through. The map below is a map of “excessive rainfall”. So rather than a map of rain amounts (I’ll still have one below), it will highlight the areas that are MOST LIKELY to get a few of those 5-6″ rain reports. Unfortunately there’s a lot of us that have that chance… Merrimack Valley, Metro West, Worcester County, and even Boston.

As for a rainfall forecast, a lot of us are in line for 3-4″. But even areas that are in the 2-3″ range are still highly susceptible to flash flooding. Getting 3″ of rain on a saturated ground is still a TON of water, let alone it happening in just a few hours.

Ok, onto the wind threat

So as mentioned earlier, this is the tale of two storms. For some of us it’s about the rain and for others it’s the wind. Now let me clarify. If you’re in line for the heaviest rain it does not mean it’ll be dead calm. And if you’re in line for the strongest wind, it doesn’t mean you won’t see ANY rain. As you might expect, the strongest wind will be on the coast. So we do have a Tropical Storm Warning in effect for all areas east of the I-95 corridor. This is issued for Tropical Storm Force winds (sustained winds of 40 mph or more).

Aside from the sustained wind, we’ll of course have gusts. And gusts could get pretty strong, especially on the Cape and the Islands. Some gusts could exceed 60 mph. Now don’t be overly alarmed. We’ve seen 60+ mph gusts with Nor’easters. That said, we’ll likely see some damage and we’ll likely see some power outages but just take your typical precautions and pull patio furniture in and take awnings down and you’ll set yourself up to at least be more successful during the storm.

And tornadoes you say?

Unfortunately, yes. While low, there is a risk for tornadoes. You don’t need me to tell you that tropical storms and systems have a lot to spin. That what hurricanes and tropical storms do! They spin. So as they spin some of the downpours into the area, they may just spin up a brief tornado. What area is most likely for that? Well basically all of us, so it’s just a day to be weather aware tomorrow.

What about power outages?

Again, unfortunately plan on power outages. Especially where we see the strongest wind. Keep in mind Elsa will produce several gusts in the 60-65 mph range for the Cape and the Islands and persistent 50 mph gusts on the coast. It’s not like a thunderstorm where it’s one gust and done. This is one after another. That will likely bring down trees and take out power. Most likely areas for that — no surprise — is the Cape and the Island. Now, that said, areas back west still will likely see some outages. While 35 mph doesn’t seem like much, a saturated ground with more rain to come, the ground is very soft so entire trees may just be uprooted if the ground isn’t solid enough to hold the roots in.