Lots to talk about today in the blog, let’s start with Tropical Storm Fay:

The 5pm update from the National Hurricane Center doesn’t change much. A directly north path into northern New England with the track staying in well west of us. Fay did officially make landfall today though, just outside of Atlantic City, New Jersey. The biggest impacts from Fay continue to be the amount of rain and flash flooding. Winds with the latest update show max wind gusts at 65 mph. Windy, yes, but the flooding much more widespread across New Jersey. 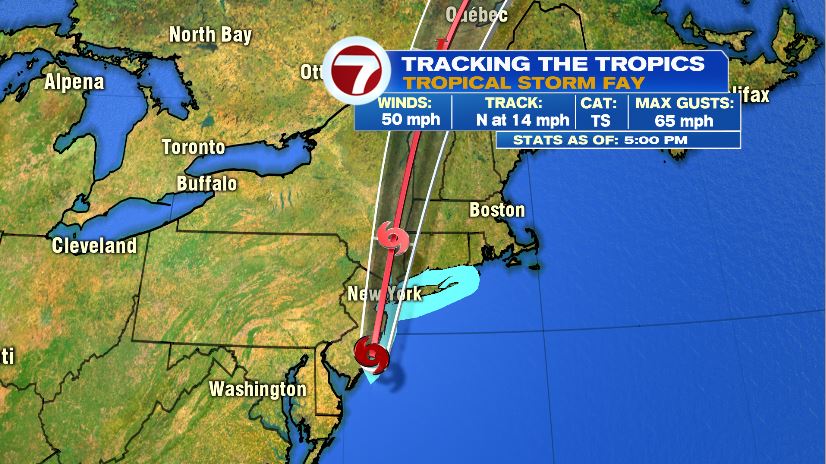 Fay will drag plenty of tropical moisture north into New England as well, but most of the rain will remain centered on the forecast track. For that reason, the National Weather Service has shaved back the Flash Flood Watch to just western Massachusetts, New York, and Connecticut. Rain amounts here will vary a lot from town to town. With a few downpours overnight, most will end up with .5″ – 1″ of rain. If you happen to get a couple downpours back to back, you may end up with 1″ – 2″ but there won’t be widespread flooding. We should also note that the as the downpours move through tonight, there is a very small chance of one of the storms being severe. The risk is low. Very low. But it’s not zero. 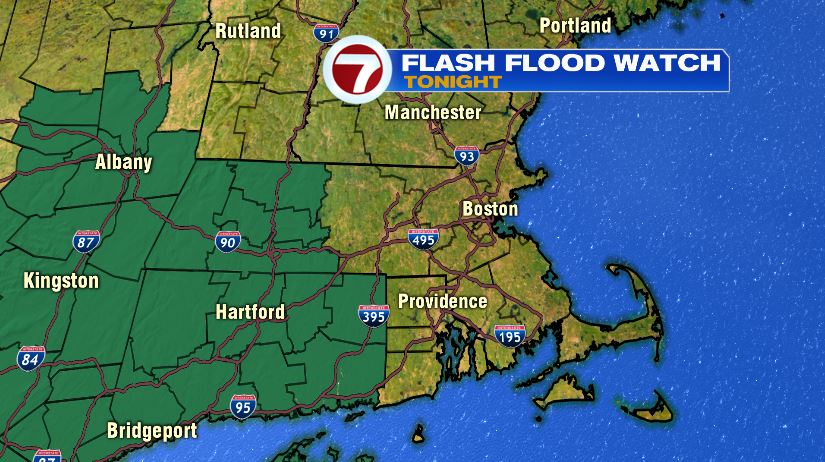 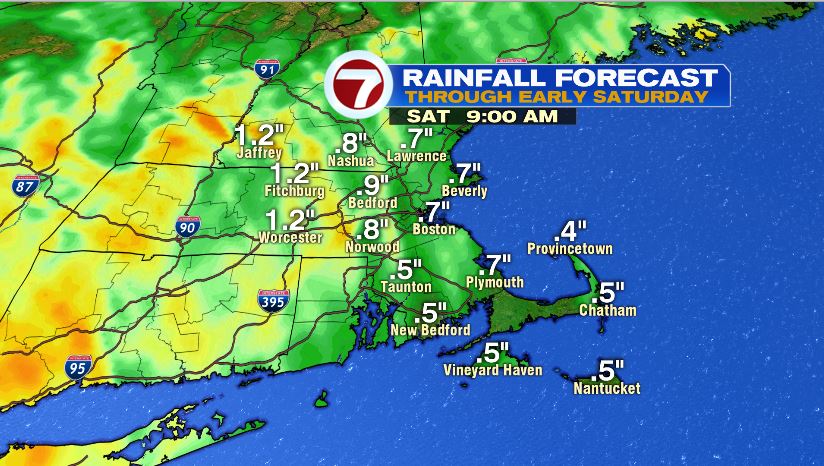 The 2020 Hurricane Season has been off to a fast start. We’re now onto our sixth storm of the year! All six though, have only reached tropical storm status — none reaching hurricane strength. Even so, plenty of “firsts” have been set this year. 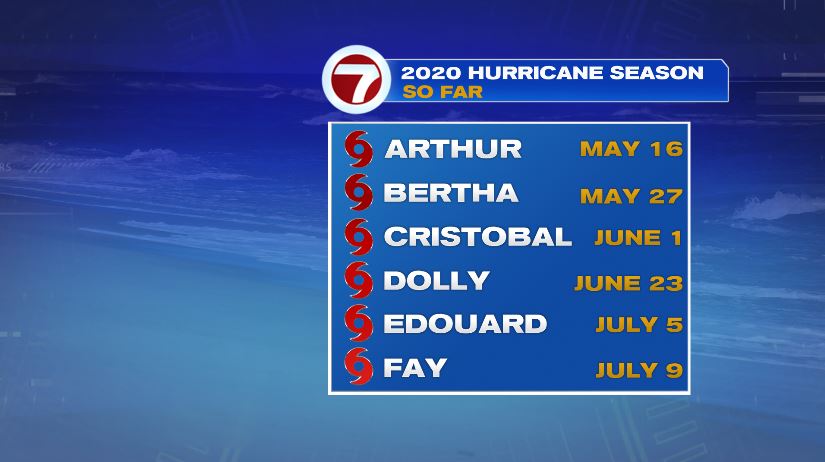 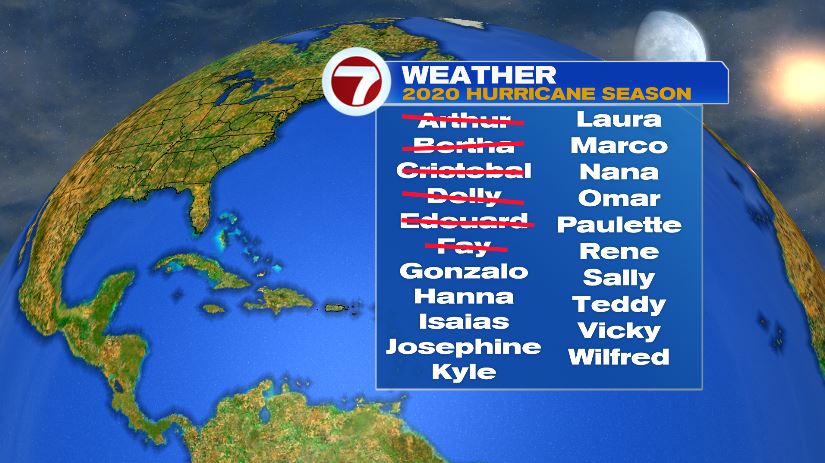 Many are comparing the 2020 hurricane season to that of 2005. That year also started extremely busy, but the big difference was the strength of the storms. Remember everything this year has only made tropical storm status. In 2005 by the F storm, 3 of them reached hurricane status and 2 of the 3 reached major hurricane status — meaning at least a Category 3. That year produced Emily which was the only Category 5 storm to form in July on record. So what happens if we run out of names? Well it happened in 2005 and also the last time it happened. At that point, we’d head into the Greek alphabet. Let’s hope we don’t have a repeat of 2005 this year. Aside from the number of storms itself, 2005 produced some infamous storms including Rita, Wilma, and Katrina.

Having a tropical system pass through Massachusetts during the month of July is in rare company. It’s only happened five times prior to now. The first in 1916 before hurricanes were named and most recently in 2006 with Tropical Storm Beryl. Each storm moved through as a tropical storm, not hurricane. Fay will be a close one and one to watch. The official track actually keeps the eye out of Massachusetts and technically in New York state. So we may have number six, we may not. Either way, our forecast doesn’t change. Scattered showers and downpours overnight tonight into early Saturday. Winds could gust to 35 mph on the Cape and Islands. 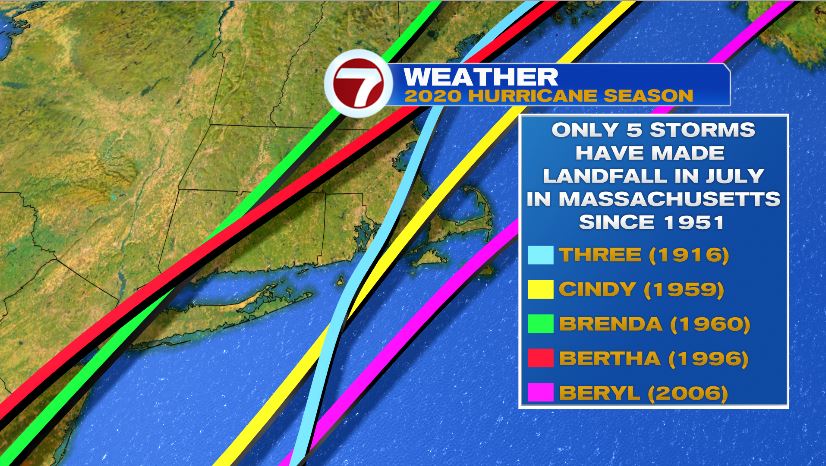 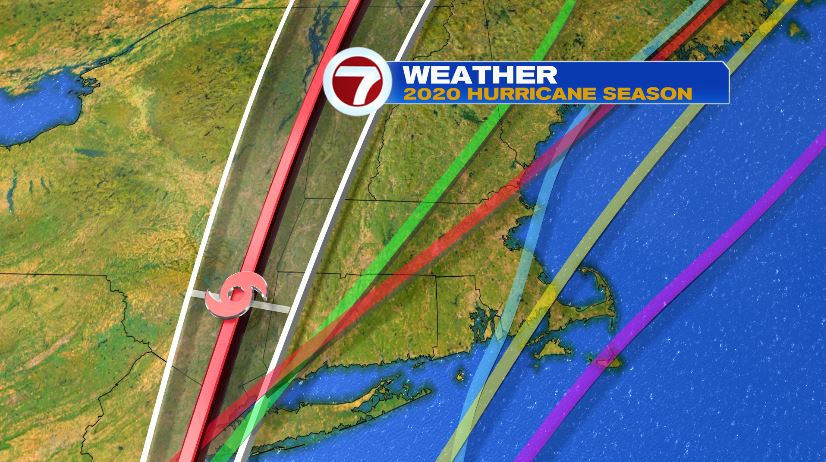 The great news is that outside of an early shower on Saturday, your weekend looks pretty nice! After those morning clouds and showers Saturday, we’ll break into sunshine and that will send temperatures soaring into the mid to upper 80s! There is a very small chance of a pop up storm Saturday afternoon, but even that the best chance is further west so it should spare the beaches. Sunday is a total beach day. Another small chance of a shower or storm inland with otherwise partly cloudy skies and temperatures near 90. 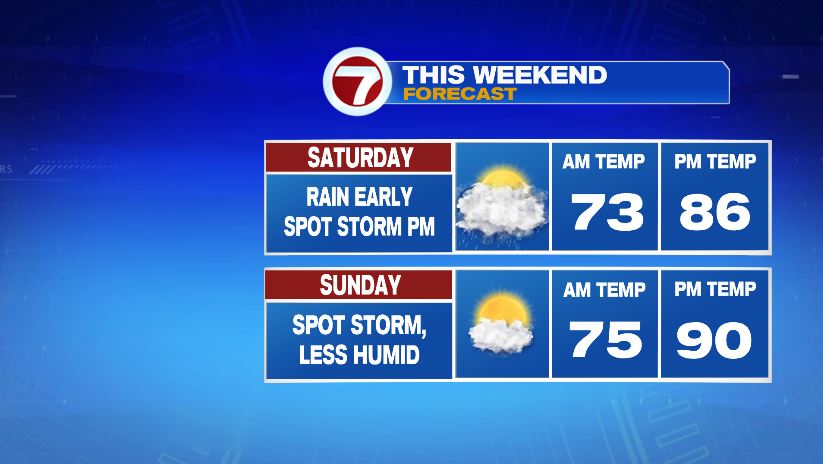 If you are heading to the beach, enjoy the sunshine and warmth but because we do have a tropical system in the vicinity, but aware of a moderate to high risk of rip currents and large waves. Also remember the sunscreen. UV index soars again with all of the sunshine. 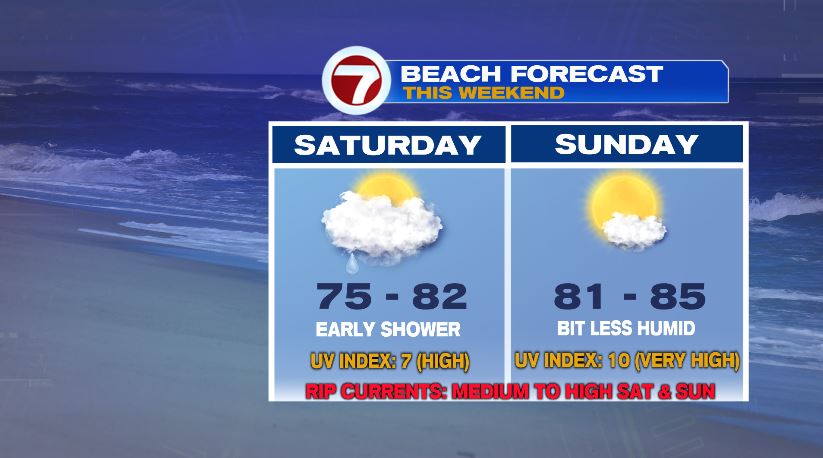