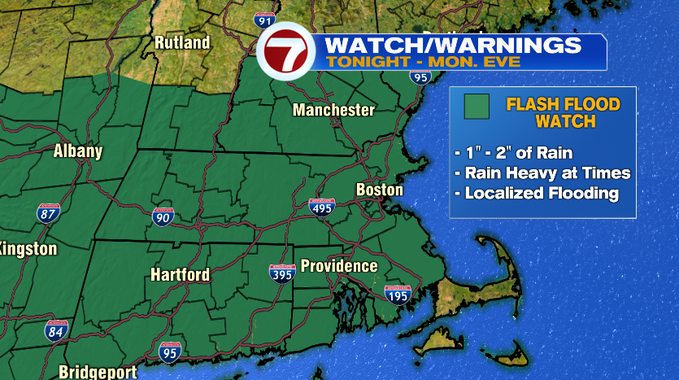 With over 7.6″ of rain through the 10th day of July, over 6.5″ above normal for Boston, more rain is moving in tonight through Monday. This rain includes pockets of downpours and embedded thunder which could lead to localized flooding since the ground is saturated and the streams and rivers are running higher than normal.

A Flash Flood Watch has been issued for most of the region (not including the Cape and the Islands) from 8PM Sunday until 8PM Monday. The Flash Flood Watch for Southeastern MA is from noon Monday through 8AM Tuesday.

The rain overnight into tomorrow will include embedded downpours which will likely set up along and north of the Pike which will lead to higher rainfall totals closer to the MA/NH stateline. We’re looking at 1″ to 2″ of rainfall with locally higher amounts possible.

Areas south of the Pike will likely see lower rainfall totals, between a quarter of an inch to an inch is expected.

Showers will start to wind down by around the evening commute with most of the activity out of here by sunset.

Tuesday features a few showers, mainly in the morning otherwise it’s mostly cloudy with highs into the 70s, 60s at the coast due to an easterly wind off of the cooler ocean waters.

Wednesday is still mainly cloudy, but temperatures will warm-up into the low 80s as winds shift to out of the south.

The end of the week pumps in the heat and humidity with highs in the upper 80s Thursday, 90° by Friday. Storms could move in late Friday night, which could flush out the heat a bit into next weekend.

Highs next weekend remain in the mid 80s with shower/storm chances each day, but at this point both days do not appear to be washouts.