Freezing Drizzle to Showers to Snow 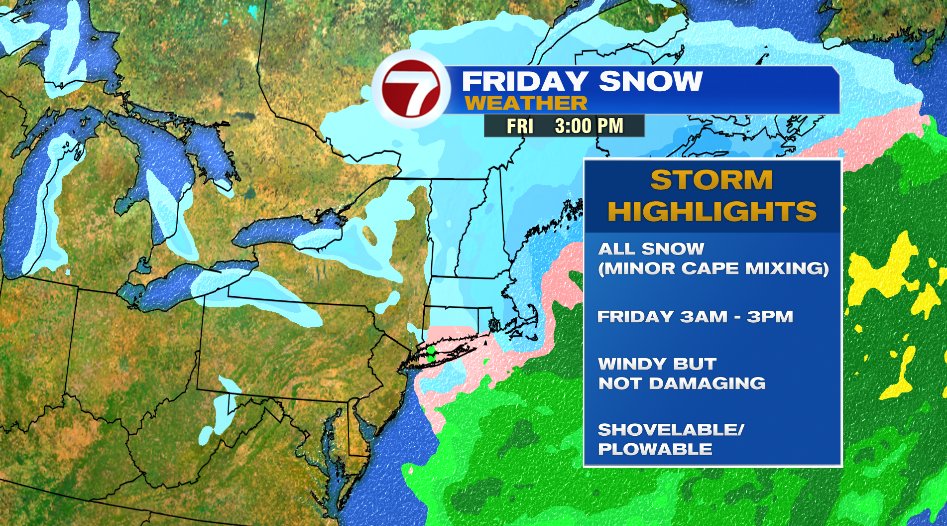 A little bit of everything is on the way over the next three days. Typical New England, right!? We have warm, cold, sun, and several types of precipitation on the way between now and the weekend.

This morning watch for slick spots on the roads, sidewalks, and your driveway. Patchy freezing drizzle will develop from about 7am to Noon. We have a winter weather advisory in effect for that reason. Most of us should be ok by 10am but the hillier terrain will have some cold air linger for a bit longer this morning. That winter weather advisory is officially for everyone outside of 128, but it’s most likely on the 495 corridor from I-93 in Lowell to Route 2 in the Acton area and northwest of there. So if you’re in southern New Hampshire or north of Route 2 be careful on the roads this morning.

This afternoon temperatures will climb to the upper 40s and even low 50s. That will flip the precipitation over to just rain. We’ll have spot showers/drizzle until noon-1pm. After 1pm showers will become more scattered with some embedded heavier pockets and even downpours. If you’re west of I-95 you’ll probably be dry by 2-3pm with those showers lingering in the afternoon and evening east of I-95 and especially SE Mass and the Cape.

Friday is the day that’s grabbing all the headlines in the forecast as our first decent snow arrives in southern New England. It’s still early but here’s a few takeaways:

So how much snow? Well here’s an early look at forecast amounts. Expect some tweaks between now and Friday.