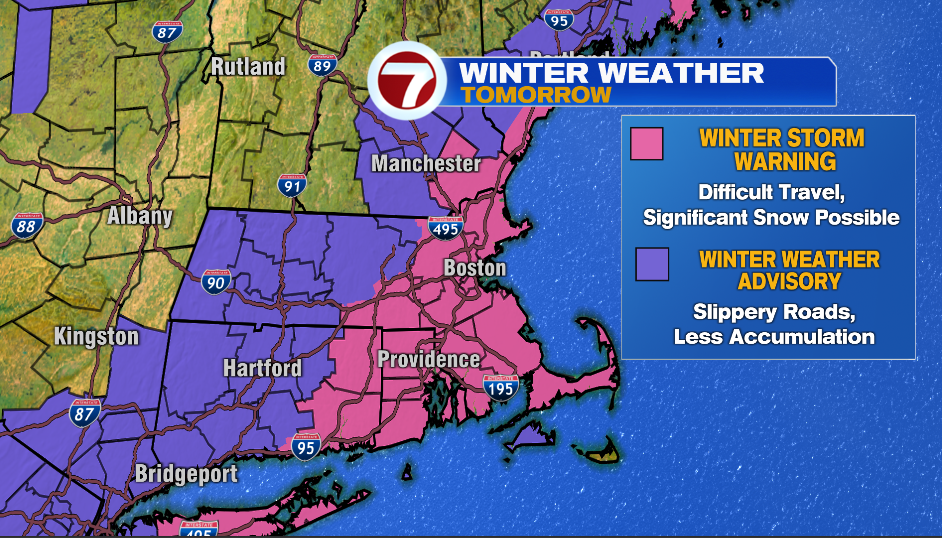 A Winter Strom Warning is in effect for areas in the pink color above which includes everyone inside of I-495. These are the locations where roads will become snow covered and travel will be difficult. 1″ per hour snow rates are likely throughout the Friday morning commute.

A Winter Weather Advisory is in effect for areas outside of I-495 (purple color) where we are expecting less snow. Roads will still be slick and snow covered at times, but crews should be able to keep up with the snow falling.

No changes to the snow map since this morning. We are still expecting an area of 6-8″ of snow for metro Boston down into the I-95 corridor, and for areas away from the coast in Bristol and Plymouth Counties.

The South Shore will likely have rain drops and sleet mixed in throughout the event, so it’ll likely be closer to 3-4″ of snow. This will also be the case for the upper and mid Cape.

The Merrimack Valley is forecast to get 5-6″ of snow, 4-6″ near Bolton, and then a bit less for Worcester with a storm total between 3-4″ of snow.

Northern Worcester County will have the least amount of snow from this system with a forecast of 1-3″ of snow.

It’s not a blockbuster storm, but the timing of the storm makes it a high impact event with many schools already making the decision to cancel.

You won’t see the storm total amounts when you look out the window at 5-7 AM tomorrow morning. The heaviest snow will fall from 5-11 AM. Heavy snow will be falling throughout the morning commute. Crews will have to keep up with 1″ per hour snowfall rates.

Saturday will be cold but sunny. Temperatures start in the teens and then we end up in the upper 20s. Showers move in Sunday afternoon as temperatures begin to rise. There could be some ice inland as the initial precipitation moves in and temperatures are near freezing well inland.