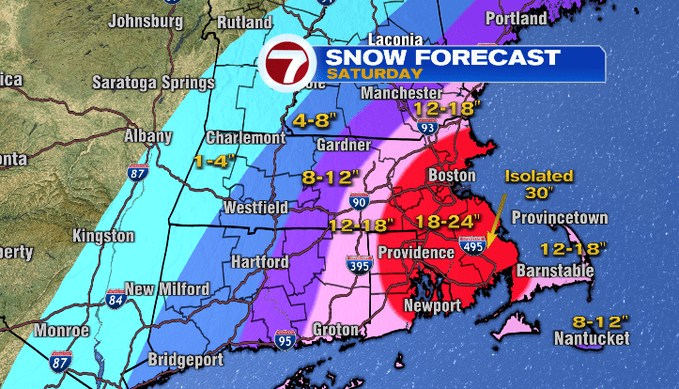 Here we go, we’re counting down the hours to a nor’easter that will pack a punch of significant snowfall, blizzard conditions, and some coastal concerns due to flooding and beach erosion. A Blizzard Warning has been issued for eastern MA and the NH seacoast, while a Winter Storm Warning has been posted for Worcester Co. and southern NH. The Blizzard Warning includes the hazard for strong to damaging gusts, which coastal communities could top around 50 mph, 60 mph possible for the Cape.

Speaking of blizzard, to reach blizzard criteria, you need all of these lasting 3+ hours: blowing or falling snow, wind gusts up to 35+ mph, visibility 1/4 of a mile or less. It looks like we will hit this criteria for much of the viewing area.

Tonight, we’ll have mainly cloudy skies with a few passing flurries out ahead of the storm. The leading edge of the snow pushes along the southern coastline of New England around 10pm and moves northward towards NH through midnight.

These snow showers become more steady overnight turning steady to heavy around daybreak with bands of 1-3″ per hour snowfall rates through the afternoon. These heavy snow bands will likely create white out conditions alongside strong winds gusts resulting in blowing and drifting snow. Some of these heavier snow bands (in the deeper shades of purple in the Storm Timeline images below) could be as high as 2-4″ per hour snowfall rates, leading to higher snowfall totals. Thundersnow cannot be ruled out as well.

By 7pm Saturday, the snow starts to back off in intensity and begins to lift off to the north through midnight.

For your snowfall totals, we’re looking at 1-2 feet of snow for much of eastern MA. There could be locally higher amounts (up to 30″) where the heavier snow bands set-up for several hours at time. The totals drop off as you head west into north-central MA and into southern NH.

Winds will also be an issue tomorrow with gusts picking up around midday, continuing through the evening. Gusts will be highest at the coast, where it cold pick up around 50 mph, 60 + for the Cape and Islands.

When we’re talking winds that strong, expect power outages and make sure your generator is properly running.

Another hazard with this storm is battering surf leading to beach erosion and coastal flooding. A Coastal Flood Advisory has been issued from 5am Saturday and remains in effect until midnight.

The coastal flood threat will be especially apparent around the two high tide cycles, around 8am Saturday and around 9pm Saturday night.

In terms of timing the snow, the wind and the coastal flood threat, if you HAVE to travel tomorrow, road conditions will deteriorate through the morning and most certainly will be toughest to handle through midday and evening.

The second half of the weekend is dry with a cold breeze out of the northwest. Highs on Sunday will be in the low 20s under mostly sunny skies.

Next week, we have a gradual warming trend through Thursday when we could hit 50°. That warm-up through midweek will be accompanied with some rain showers.

In the meantime, stay with 7news for the very latest on this storm. Storm Force Coverage kicks off at 5AM Saturday morning to keep you and your family safe.