Near Record Highs Today, Back to Reality Tomorrow 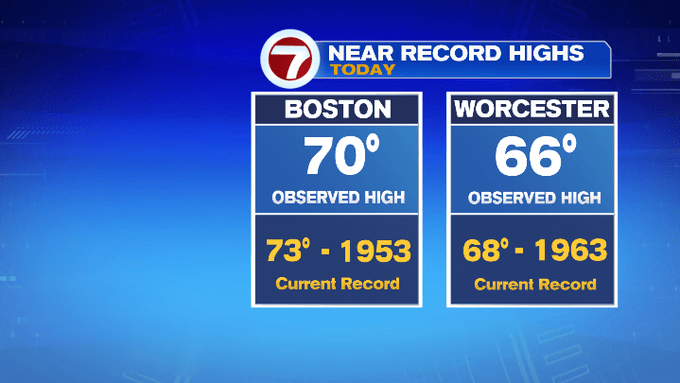 Temperatures soared to around 70° earlier this afternoon, making it feel more like mid-September than mid-November.

Tonight, a cold front approaches bringing along showers later tonight and continuing into early tomorrow morning, likely exiting before daybreak. We could even see a few wet snowflakes mixing in for the high terrain in interior southern NH and along the RT. 2 corridor.

We’re looking at around a quarter of an inch of rain through Friday morning and then we should be dry and much cooler through the afternoon with highs in the 40s. Plus, we’ll have a chilly breeze making it feel even colder.

It’s still chilly for the start of the weekend with highs in the 40s on Saturday, but at least we have less wind under mostly sunny skies. Sunday brings more cloud cover with highs into the 50s. Rain chances also return Sunday night.

It will be a wet start to the week as the rain lingers into Monday. Tuesday is drier and colder. Wednesday and Thursday are also both dry, making it great travel days for the Thanksgiving holiday.