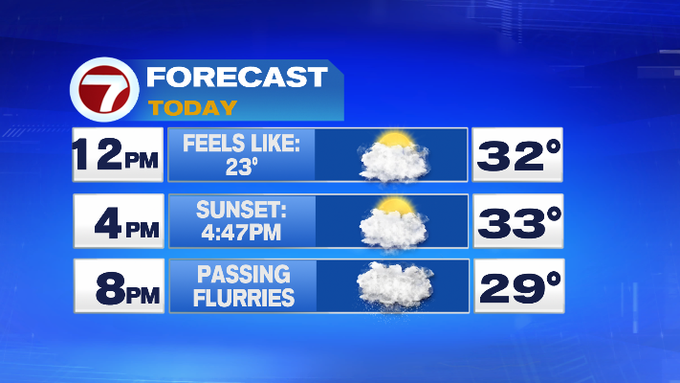 After biting cold highs the last two days, we will see highs climb into the 30s for your Sunday afternoon under mostly cloudy skies.

With a front passing through tonight, we’ll see a chance for a few passing snow showers. These are quick-moving and will likely not bring much accumulation.

The winds shift to out of the north-northwest tomorrow morning behind the front, ushering in slightly colder temperatures for Monday along with the threat for some ocean effect snow showers for the Cape and Islands through midday tomorrow.

Late Monday night into Tuesday morning, a clipper system will bring some scattered showers, starting off as a few snow showers, mixing with a few rain showers south. Highs on Tuesday will rise to near 40°.

Much colder air filters in for the middle of the week. Both Wednesday and Thursday, highs will be in the 20s, but overnight Wednesday into Thursday will likely be dangerously cold with lows dipping into the single digits, likely coupled up with even colder wind chills.

Thankfully, temperatures moderate to nearly seasonable high temperatures by Friday. A few snow showers are in the forecast for next Saturday.