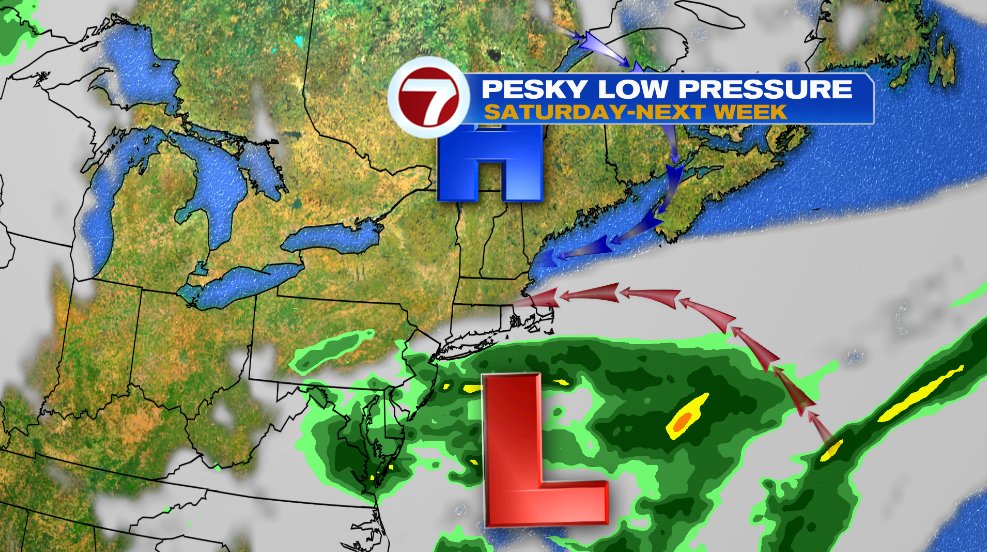 Today was a beautiful day with many towns getting close to the 70° mark if not climbing into the 70s. You may have noticed high cirrus clouds moving in late today and clouds will continue to thicken up overnight and through the day tomorrow. Despite more clouds tomorrow, it’s still a nice day with mild temperatures and light winds.

The increasing clouds are ahead of our next storm system that won’t directly hit us, but will have a big impact on our weather for the next WEEK! High pressure will slide in and push the rain south of us. This weather pattern is going to park itself from Saturday through the middle part of next week. While the rain stays south of us, we’re going to be stuck in some cooler air with a persistent onshore wind as we’re sandwiched between the High and Low. Here’s a general takeaway of what to expect Saturday through Wednesday next week:

– Rain mostly south of us. Best chance of rain is Saturday and most likely south of the Mass Pike.

– Wind will be windy/breezy from the northeast especially on the coastline.

That means we’re in store for a less than ideal Mother’s Day. Now, it’s not terrible. We’re not talking washout rain or any rain for that matter. But it’s going to be rather cloudy, pretty cool, and windy — especially on the coastline.

May has been a pretty chilly month so far. Four of the first five days were below average. Today was above, and tomorrow will be touch-and-go for above or below average. Once we get into the weekend we’ll string together a bunch of those “blue square days” once again.

Once we get into Saturday we’re basically in a holding pattern of cool air, northeast winds, and mostly cloudy skies into the middle part of next week.