Scattered Strong to Severe Storms Through This Evening 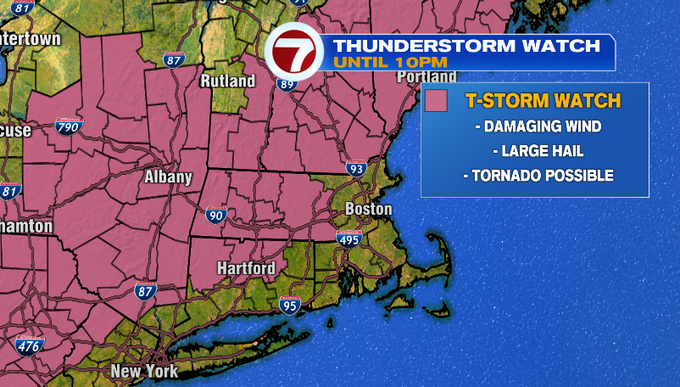 As for the timing of the storms, southern NH is already in the thick of it as of 5pm with a few severe thunderstorm warnings issued and reports of wind damage and hail. By 7PM, the line traverses NE MA, central MA and areas along and north of the Pike. The line of severe thunderstorms in southern NH has shown signs of weakening, but these storms could still be on the strong side.

By 11pm, we’ll still have a few pockets of storms with a broken line stretching from the NH seacoast to CT, but the severe potential will have been weakened by then.

For your Thursday, we’ll have a few showers lingering in the morning, otherwise we’ll have mainly cloudy skies.

A few more showers in the afternoon cannot be ruled out, so just have the rain gear nearby, especially SE MA.

Friday has a spot shower chance, but the bulk of the day should be dry with highs into the low 70s under mostly cloudy skies.

The weekend looks great with highs around 80 Saturday, mid 70s Sunday. We’ll have more sunshine Sunday, however it will be a bit more breezy.

The mid 80s return next week by Tuesday and Wednesday along with the sunshine.