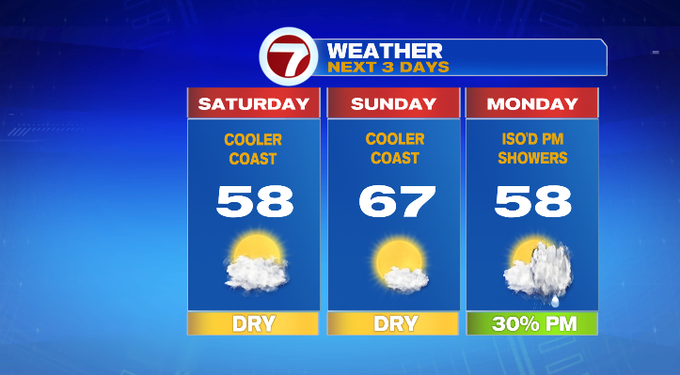 After a chilly start to our Saturday, temperatures will rebound into the upper 50s to around 60° under a mix of sun and clouds. We’ll have the occasional breeze, and an onshore breeze will set up along the coast, dipping temperatures a few degrees later this afternoon.

Tonight, lows will dip into the upper 30s to low 40s under mainly clear skies.

Tomorrow is the pick of the weekend as highs stretch into the mid 60s to near 70°, low 60s at the coast as winds shift to out of the SE for our coastal communities in the afternoon as winds remain out of the NW inland.

Speaking of tomorrow, it will be a beautiful day for your outdoor plans including if you are participating in Project Bread’s annual event, the Walk for Hunger. Whether you’re getting your steps in around your neighborhood or in the city, it will be a great day for this great cause.

Monday will bring increasing clouds as a line of showers slide in for the latter half of the afternoon and into the early evening.

A lingering shower could be with us for early Tuesday morning, but overall Tuesday should be mainly dry under mostly cloudy skies and highs around 60°.

More showers are on the way for Wednesday, but these will be scattered.

We dry things out for the end of the week. Thursday features mainly sunny skies and highs in the mid 60s while Friday will be partly cloudy with highs around 60°.