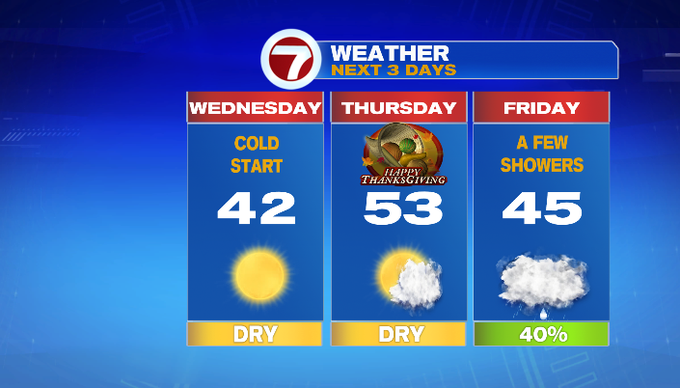 For the busiest travel day of the year, if you stepped outside to get a head start this morning, you were greeted by the coldest air so far this season. We have to go back to early April for the last time we had temperatures dip into the 20s for Boston.

It is also a breezy start, so wind chills are starting off in the teens for much of the region. Thankfully the winds are expected to weaken through the late morning and into the afternoon, allowing the wind chills to not be so drastic compared to the actual air temperatures.

If you’re hitting the roads around southern New England today and tomorrow, the forecast is looking great. For your Friday travel plans, you’ll likely be dodging a few showers.

If you’re traveling nationally today, the forecast is relatively quiet for much of the country.

If you’re traveling nationally on Thanksgiving Day, there will be a system with an accompanying front that will bring some snow across portions of the Midwest, while it will just be rain across southern MI, the Ohio Valley and extending as far south as Texas.

That system will be advancing towards southern New England late Thursday night into Friday morning bringing rain showers for those heading out to get the best deals on Black Friday. Friday will not be a complete washout, but just be prepared with the rain gear.

It’s drier and colder for the weekend with highs near 40°. The chill sticks around for the start of the work week. We’re keeping an eye on a system that could bring a few showers Monday (right now it could just skim the South Coast and the Cape).