As of 5pm this evening, Tropical Storm Fay has formed off of the coast of North Carolina. We’ll talk about Fay in a second, but how about the heat and humidity today?! Air temperatures today hit the 90 degree mark for many. Dew points (humidity) climbed to the low to mid 70s which is tropical, heavy, oppressive air. Combine the two, and feels like temperatures soared to the upper 90s. A few towns hit 99 for the heat index this afternoon, but nobody officially hit the triple digit mark. 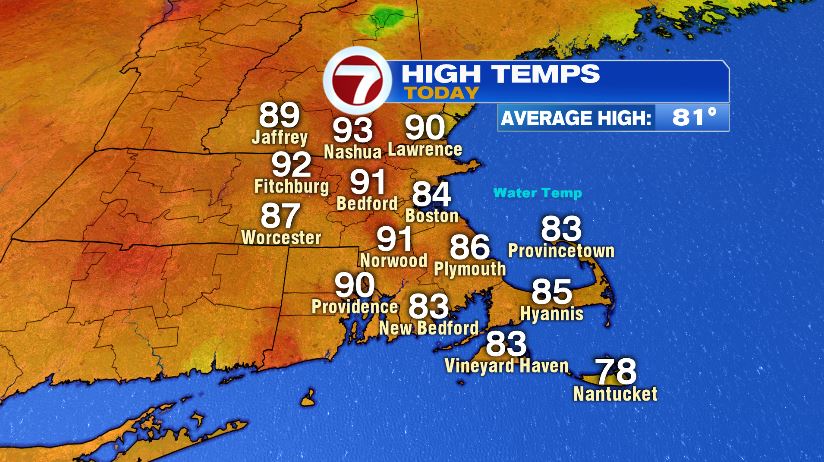 And while we’re talking about the heat, it’s a good reminder to bring your pets inside to keep them cool. And beyond that, be sure to do those walks early and late in the day. When air temperatures hit 90 like we saw today, concrete temperatures hit 125 and blacktop hits 140! 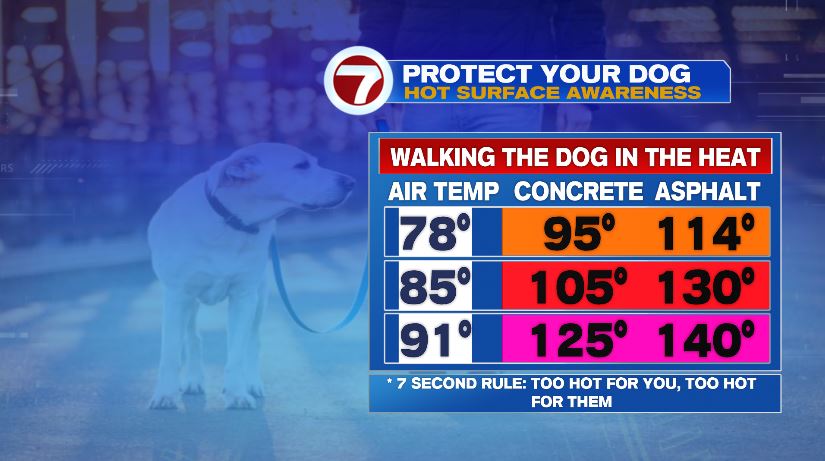 Tomorrow is still warm, still humid, but not as bad as today. First off, we’ll have more clouds so you won’t have to deal with the direct sunlight. Most of us will see temperatures in the middle 80s. A southeast wind will again cool the coastal spots to the upper 70s/low 80s. Despite the cooler temperatures, the humidity will still be sky high. In fact, it will stay that way all the way through the weekend. Rain and downpours will start to move in late in the day — those the effects of Tropical Storm Fay. 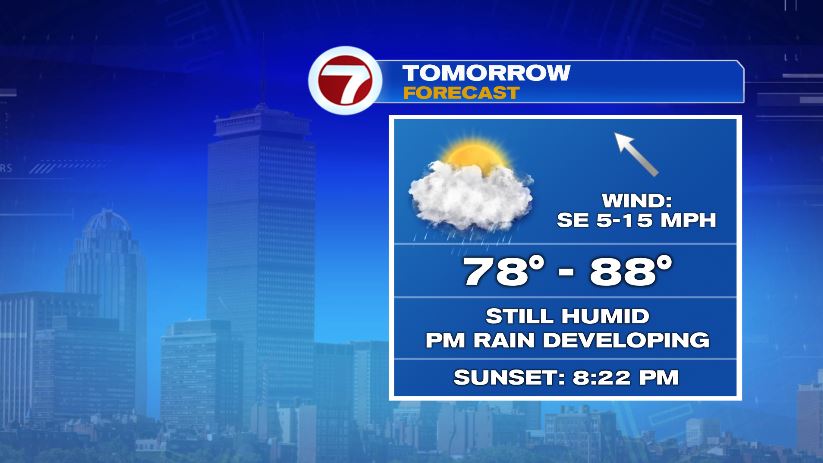 The official track from the National Hurricane Center takes Fay as a tropical storm through New York City and western Massachusetts. For us, that’s good news. That means your Saturday isn’t a complete washout. Rain will arrive late Friday with the bulk of it overnight Friday into Saturday morning. While we’ll start Saturday with clouds and showers, we’ll actually see some sun by the end of the day. 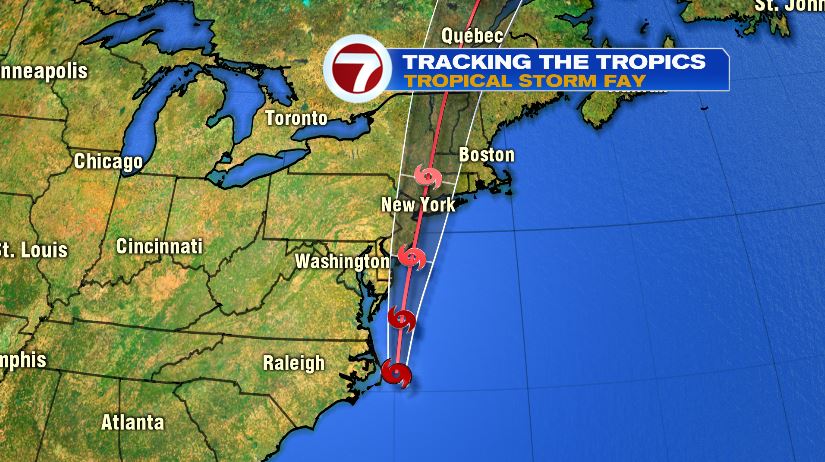 Despite the track going west of us, and seeing some improvement Saturday, that doesn’t mean we won’t see heavy rain. The rain will be scattered in nature so that means rain totals will vary significantly from town to town. Don’t take the numbers here verbatim, but it shows that some towns could see .5″ of rain while others are closer to 2″. 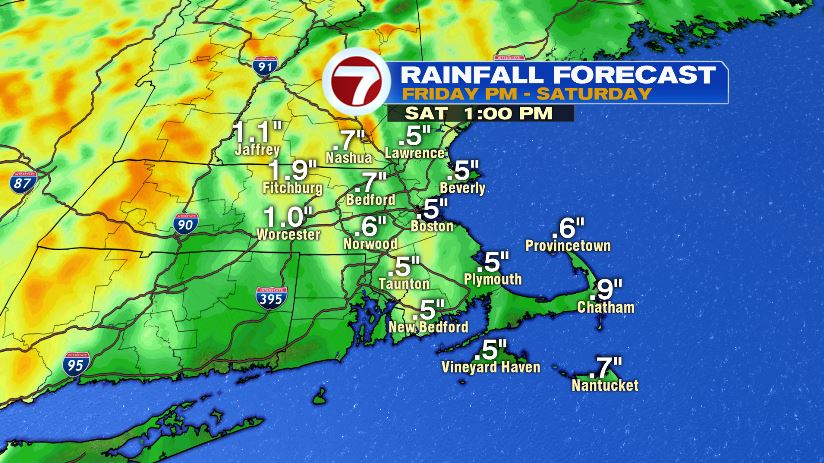 With that amount of rain falling in a fairly short period of time, of course there’s the risk for flash flooding. A flash flood watch has been issued for all of Massachusetts and southern New England. That doesn’t mean the entire state will be underwater, but rather the entire state has the POTENTIAL to see flash flooding and urban street flooding — mainly any community that picks up 2″ of rain in an hour or less. 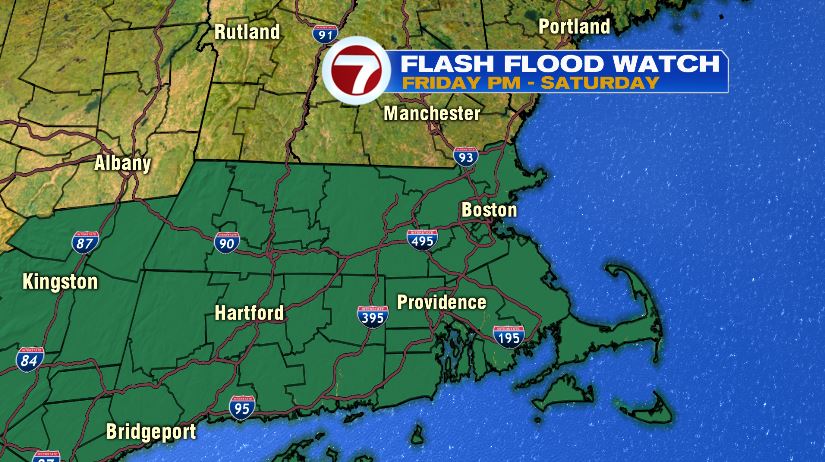 While flash flooding will be our biggest risk here in the Bay State, we’ll also see gusty winds and some ocean effects. We definitely will have been through worse wind before, but winds could gust from 25-35 mph especially on the coast. Also plan on rough surf Friday and Saturday along with an increased rip current potential. With astronomical low tides, coastal flooding is not a huge risk. With the bands of rain late Friday and overnight into Saturday we can’t rule out a severe storm either, so best to be weather aware Friday night through Saturday morning. 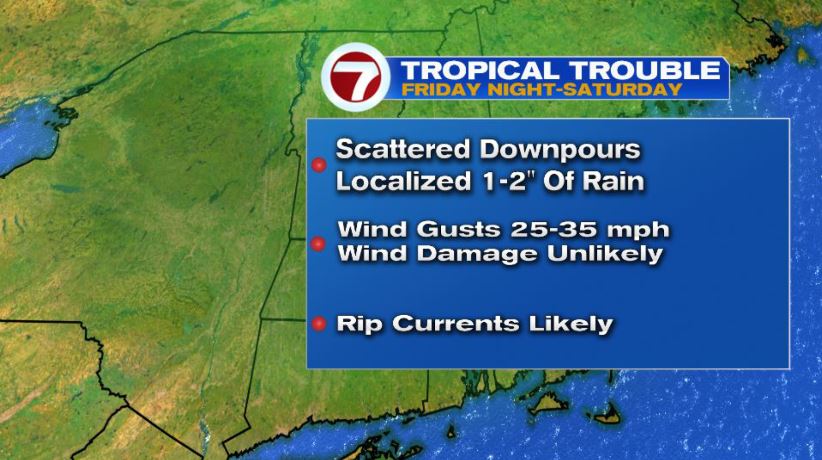 Once Fay moves through, we see massive improvement in our weather. Like I mentioned, we’ll likely even see sunshine before the day is done on Saturday. Sunday is a return of the heat and it’ll still be extremely humid. With more sunshine, temps in the upper 80s, and dew points in the 70s, feels like temperatures will be back in the 90s. Sunday will be a good beach day. We can’t totally rule out a spot storm during the afternoon on Sunday but chances remain fairly low. 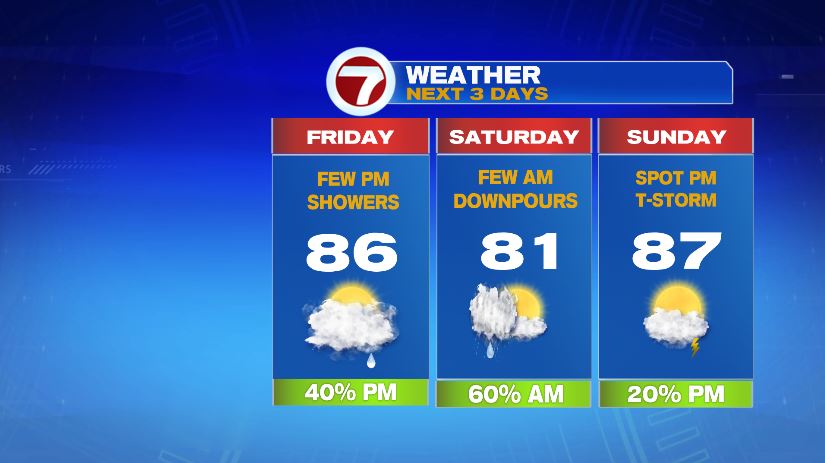