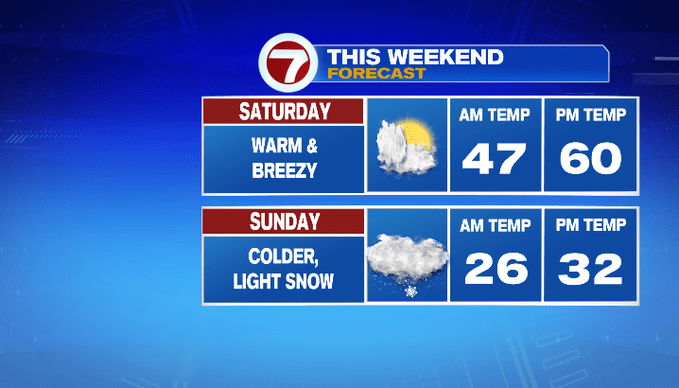 Saturday features a warm-up which could produce our first 60-degree day of 2022 for Boston. However, this record warmth is short-lived as winter returns for the second half of the weekend.

Today, we’ll see highs vary in the mid 50s to low 60s with winds out of the southwest picking up from 10 to 15 mph. Expect partly cloudy skies this afternoon.

Tonight, we start to cloud up after 11pm ahead of the light snow showers that are expected to break out across the region.

These snow showers are associated with a low that is passing offshore to our SE. It meets up with the colder air that swings in from our northwest.

The light snow showers start to push farther south and east through the late morning and into the early afternoon. By 2pm, it will be confined to the Mass Pike to areas south and east.

By dinner time, these snow showers will continue to slide farther south, mainly along the South Shore and the Cape and Islands by then.

As winds shift to out of the north – northeast Sunday evening through early Monday, some of these snow showers will take on some ocean enhancement (think ocean effect snow showers) and will result in a few areas receiving up to 3″ along the Cape and Islands where some of the steadier snow showers set-up.

Much colder air settles in for Valentine’s Day with highs into the low 20s. This will be coupled up with a cold wind so be sure to bundle up.

Tuesday features highs in the upper 20s, but at least it will be less windy.

Temperatures moderate by the middle of the week as we’re back into the 40s by Wednesday followed by mid to upper 50s by the end of the week. Rain likely returns by Friday, too.