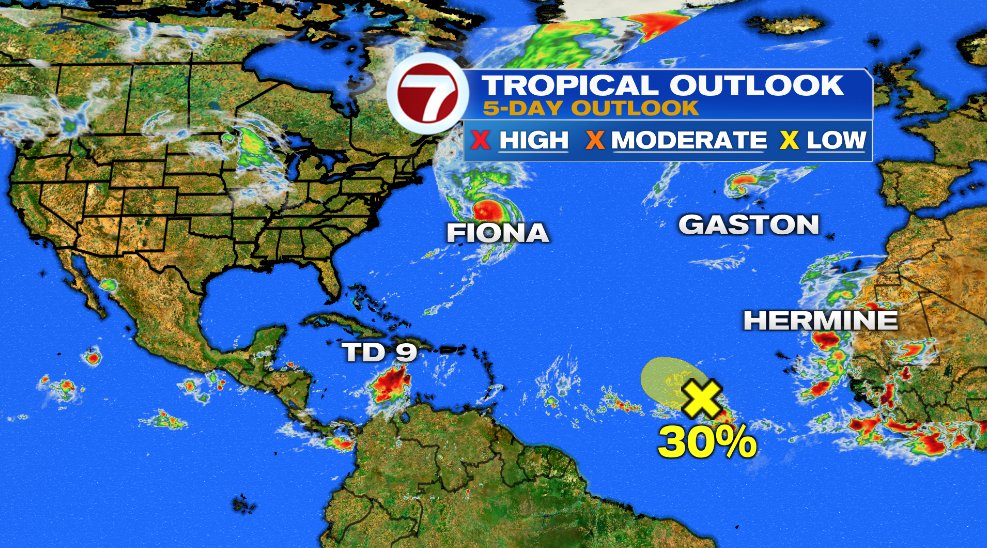 We had a very fall-like day today and it will be even more fall-like tomorrow morning! If you thought it was chilly this morning (40s and 50s), wait til tomorrow morning. Many towns will drop into the 30s overnight tonight!

After the chilly start tomorrow morning, we’ll have another fall-like day tomorrow afternoon. Saturday will feature a ton of sunshine and temperatures will rebound to the 60s. We’ll also keep the breeze around tomorrow but it won’t be as bad as today was. It’s a classic New England fall day on Saturday.

Sunday will again be a few degrees warmer and will have a few more clouds but is still a nice day. Most towns will get close to 70° on Sunday. Clouds will increase through the day and that is ahead of a few rain showers that will come in late Sunday evening/Sunday night. That means we’ll get through most of the day dry. The showers will likely arrive around sunset. That also means we’ll have a beautiful morning and Sunday morning is the Making Strides for Breast Cancer walk in Boston. In classic New England fall fashion, you’ll want to dress in layers. You’ll want some sleeves when things step off at 8am with temperatures in the 50s. It’s a rolling start and there’s a 2 mile and 5 mile loop so if you’re on the 5 mile loop, temperatures will be around 70° when you finish so you’ll likely want to lose those layers on the walk.

The tropics have exploded in the past couple of days. That’s not entirely surprising because September is statistically the most active month for hurricanes but we went from sleeping to wide awake in the past few days. I’m sure by now you’ve heard of Hurricane Fiona, but there are now 4 other areas to watch in the Atlantic for a total of five, though not all have or will have a name. Right now we have Hurricane Fiona, Tropical Storm Gaston, Tropical Storm Hermine, Tropical Depression Nine, and a tropical wave that has about a 30% chance of even getting a name.

As of 5pm, Hurricane Fiona has weakened slightly from a Category 4 storm to now a Category 3. The storm is RACING to the north at 40 mph and will crash into Nova Scotia tonight or early tomorrow morning. The track below looks a little weird, losing the hurricane symbol and instead getting an “L” but that’s just a technicality — Canada is going to be hit with a significant storm. The “L” is there because it is transitioning to a “post-tropical storm”. Basically that means it starting to develop characteristics of a storm more comparable to a Nor’easter like fronts which hurricanes do not have. Either way, it will make landfall with winds seen with a Category 2 hurricane.

Tropical Storm Gaston made no headlines this week as you might expect as it never got stronger than a tropical storm and remained out over the Atlantic the entire time. The forecast is for the storm to die out in the coming days.

Tropical Storm Hermine is the newest named storm in the Atlantic. It was just named at 5pm this evening. Much like Gaston, Hermine won’t get much attention as it formed off the African coastline and is expected to quickly die out over the open water.

Then there’s Tropical Depression Nine. That leads me into my tangent of the naming convention from the National Hurricane Center. It’s something like this:

* A disturbance is seen in the Atlantic via satellite. It will be monitored by the National Hurricane Center. While it’s being monitored, it is given a name “Invest” with a number and letter. Commonly we’ll see something like “Invest 97L” or “Invest 98L”. Not all invests will make it to the next step.

* If the sustained wind hits 39 mph, it is then upgraded to a “Tropical Storm” and is given a name off of the year’s hurricane/named storm list.

BACK TO TROPICAL DEPRESSION NINE:

Ok, so now that we’ve cleared up what a tropical depression is, we have Tropical Depression Nine that’s newly formed in the Caribbean. The forecast from the National Hurricane Center is for that storm to become a tropical storm (will be named Ian) and from there continue to strengthen into a major hurricane as it approaches the Florida Gulf Coast. There’s a lot to watch and still uncertainty as to where in Florida it goes or where it goes next. But regardless, it will be a storm to watch over the coming days.