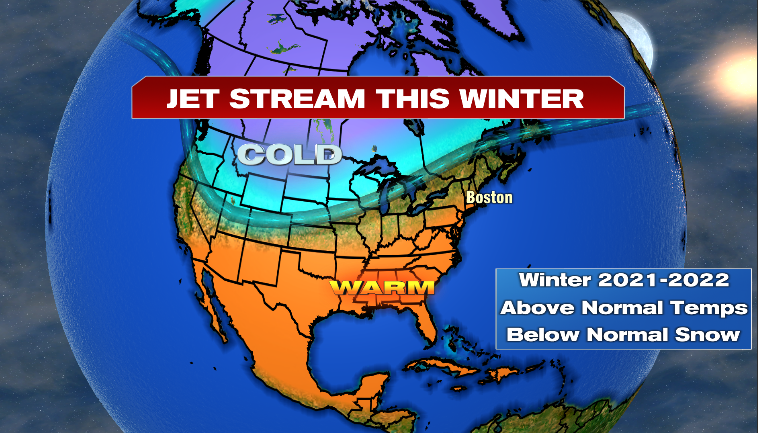 We meet again. Hope your year has been good. I’m feeling brash and sassy, last year’s Winter Outlook was respectable! Overall, the theme was there….above normal temps with below normal snow. I was too low for Worcester snowfall (forecasted ~56” /76” actual) but very close to Boston’s tally (forecasted 34.5” and ended up with 38.6”!). Let’s get to work!

OK, there’s a scene in The Matrix where Neo has a deja vu moment…

There will be elements from last year’s blog that re-appear in this years blog, namely, it’s looking like another La Niña winter for us. When we look a global Sea Surface Temperature(SSTs) anomalies we do indeed see a cool pocket of water centered along the equatorial Pacific:

A reminder of how la Niña’s generally affects the jet stream and corresponding weather patterns across North America:

A storm track displaced inland from the East Coast with warm/dry weather prevailing south of the storm track (great winter for Florida vacations!) and persistent cold and snowy weather northwest of the storm track. New England typically resides on the milder side of that storm track but can flucuate during the winter (northern New England can do quite well in terms of above normal snow in La Nina winters).

When looking at the forecast for those SST’s over the next several months, in particular winter, we see the anomalies will remain below normal. A clear signal for La Niña!

OK, so we have ourselves another La Niña for this winter. That would make it back-to back winters with a La Niña and when we look back a few decades, we can see other winters that were part of what we can call Doubleheader La Niñas.

In recent history, it looks like those winter would be:

Here is what those past winters resulted in both temperature and snowfall:

The sample size is small revealing only 5 winters but based on that short list it looks like mild temps and below normal snowfall prevail. (** No snowfall data for Worcester that year, estimated based on snowfall totals around the region)

Now, when we take another look at those SSTs in the Pacific and compare them to this time last year..

You can see the La Niña signal (just like last year) but move your eyes north, up toward the Gulf of Alaska. Last year, there was a pool of warmer than normal water but this year, the exact opposite—below normal water temperatures!

That area of the Pacific Ocean will routinely see the temperature fluctuate or oscillate every few years. It’s known as the Pacific Decadal Oscillation (PDO). The PDO has a positive (cold) phase and a negative (warm) phase…

Currently, the PDO is strongly negative! The last time we had a 2nd year La Niña and a strong negative PDO was the winter 2011-2012. As seen above in that list, a warm and snowless winter! When you look at Boston’s ten Least Snowy Winters, seven of those ten winters did have a negative PDO. I was curious to find other second year La Niña’s coupled with strong negative PDO. I found two other winters and this is what they produced in terms of seasonal snowfall:

Normal Seasonal Snowfall for Boston is 49”

Does the PDO also play a role in above normal snowy winters in Boston?

When looking at Boston’s ten Snowiest Winters looked like in term of the PDO…only five were positive with four being negative. No strong signal there.

When trying to look into a seasonal outlook, there are many variables that put force on the atmosphere at any given time….Some of these variables have appeared here in past outlooks (IE The Madden-Julian Oscillation (MJO) as well as the North Atlantic Oscillation (NAO)).

Another biggie is a larger index and that is the Arctic Oscillation (AO), also discussed in a prior blog. As a refresher, it is the sea level pressure pattern around the arctic region of the northern hemisphere and has a positive phase and a negative phase. The two phases are shown here:

The picture on the left, the negative phase, usually means cold and stormy weather for New England (when the term Polar Vortex shows up in the news). The picture on the right is the positive phase of the AO. When that occurs, you don’t hear about the Polar Vortex and New England usually experiences mild temps and little to no storminess. In the past, when the AO is strongly negative, cold and snow is plentiful whereas a strongly positive AO coupled with that previously negative PDO means winter is nowhere to be found in New England. That happened in the Winter of 2011-2012, a very negative PDO coupled with a strong positive AO.

What about this winter?

Well……..that’s a tough call as accurately trying to predict what the Arctic Oscillation (AO) is going to do beyond two or three weeks is difficult at best but when you look at some of the seasonal computer modeling you can see hints of where the AO will go. Check out the December and February surface pressure patterns…

The area circled in yellow on each map is the arctic region. In December, those yellow-orange colors around Alaska and across the Arctic Circle suggest a negative AO while on the February map much of the polar region is shaded with a purple-ish blue color….a positive AO. This suggests that the potential for cold and storminess is more likely at the beginning of winter (December) than the end of Winter (February). That is usually what is experienced in La Niña winters.

So putting it all together, I think our upcoming winter will feature:

Here ya go, the snowfall forecast for select cities & towns across the region:

We’ll see. Regardless, thanks for the read and enjoy the journey towards spring!