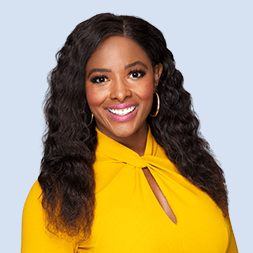 Amaka Ubaka is an Emmy award-winning journalist. She anchors 7NEWS Today in New England and 7NEWS at Noon.

Amaka is Nigerian-American and her name means “beautiful” in one of the many languages spoken in Africa’s most populous country.

Before arriving in Boston, Amaka was a reporter in Orlando, Florida where she covered many stories that received national attention: a mother of three accused of driving her kids into the Atlantic, the ISIS beheading of former UCF student/journalist Steven Sotloff, and a man swallowed up by a sinkhole while sleeping in his home. She also worked as a reporter in Omaha, Nebraska and landed her first on-air job in Redding, California.

Amaka loves meeting new people, learning their stories and being involved in the community. She spends much of her free time as an emcee for charity events including Project Hope, YWCA Cambridge, International Institute of New England, The One Mission Buzz Off, Rosie’s Place, BMA TenPoint and the Igbo Organization of New England. She is also a member of the National Association of Black Journalists.

A Florida native, Amaka has fully embraced living in New England! When she’s not on the anchor desk, you’ll find her in the gym, hiking, watching sporting events or traveling.

She received her Bachelor of Arts degree from the University of Miami.