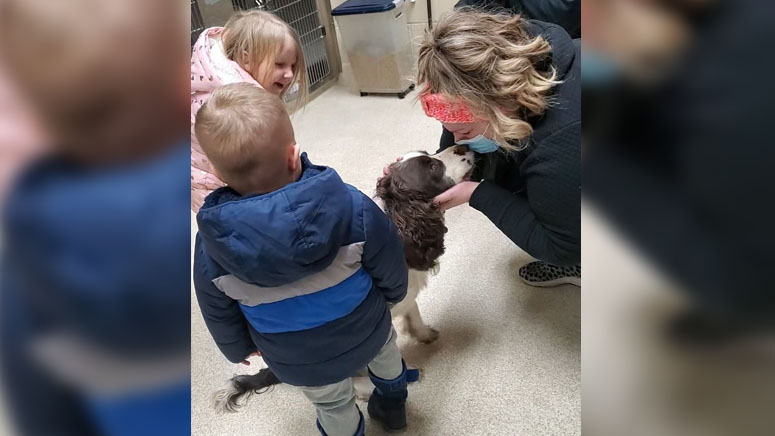 (CNN) — Local pet sleuths and animal control officers in Kent County, Michigan, teamed up to reunite a dog and his family after rescuing the canine from a grain silo.

Milo, a springer spaniel, had been missing for 43 days, according to the Kent County Animal Shelter. He had been last spotted in early February, but the case remained cold for nearly two weeks.

Nearly 20 miles away from his family, residents of the town of Sand Lake heard a dog barking over the course of a few days. Later, they found Milo, stranded in an “old bunker style silo,” the shelter said in a Facebook post.

The silo’s 10-foot-high walls prevented Milo from climbing back out, so town residents helped animal control officers loop a rope around the dog and hoist him to safety, the shelter said.

Lost Paws LLC, a local pet finder service, noticed a January 8 post from a family in a nearby town who sought a dog a lot like the one they rescued from the silo, and the service assisted the shelter with the final task of finding Milo’s family.

CNN has reached out to Lost Paws for comment.

In his homecoming, Milo, who had lost 33 pounds and survived blistering cold, immediately recognized his family and “many tears were shed from everyone,” the animal shelter said in the Facebook post.

“What he nor his owners never lost was hope and hope is what finally reunited them,” they said.