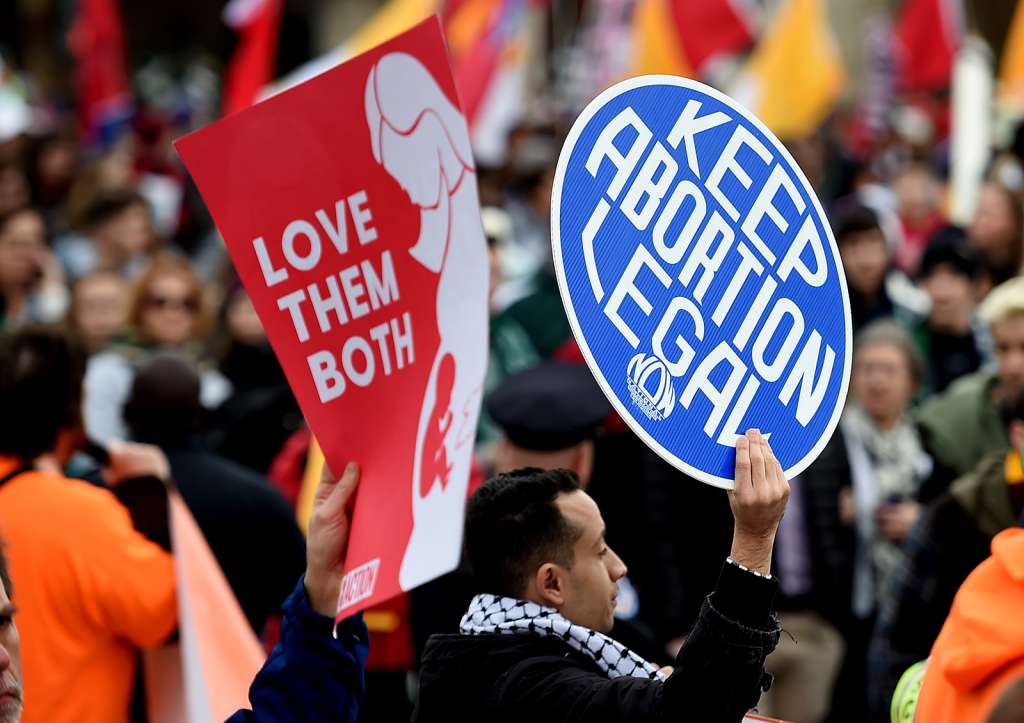 Pro-choice and pro-life activists demonstrate in front of the the US Supreme Court during the 47th annual March for Life on January 24, 2020 in Washington, DC. - Activists gathered in the nation's capital for the annual event to mark the anniversary of the Supreme Court Roe v. Wade ruling that legalized abortion in 1973. (Photo by OLIVIER DOULIERY / AFP) (Photo by OLIVIER DOULIERY/AFP via Getty Images)

(CNN) — A group of abortion rights organizations and providers filed a federal lawsuit Tuesday seeking to block enforcement of a recently passed Texas law that would allow private citizens to sue individuals thought to have assisted in violating the state’s so-called heartbeat ban.

The suit — brought by the Center for Reproductive Rights, Whole Woman’s Health, Planned Parenthood Center for Choice and other groups — is challenging SB 8, which was signed into law in May by Texas Republican Gov. Greg Abbott. The law bars most abortions at the onset of a fetal heartbeat, which can occur as early as six weeks into pregnancy and before many people know they are pregnant.

The plaintiffs in the suit take specific aim at a provision that gives individuals a monetary incentive to enforce the law, as well as a unique aspect of the measure that opens anyone who aided in accessing such an abortion to legal liability — including “someone who accompanies her sister to an abortion clinic and pays for the abortion, or a sexual assault counselor who calls an abortion clinic on behalf of a patient,” according to the filing.

SB 8 “deputizes private citizens to enforce the law, allowing ‘any person’ other than government officials to bring a civil lawsuit against anyone who provides an abortion in violation of the act, ‘aids or abets’ such an abortion, or intends to do these things,” the lawsuit states.

“In effect, SB 8 places a bounty on people who provide or aid abortions, inviting random strangers to sue them,” lawyers for the plaintiffs write, referring to the potential for the person bringing the suit to be awarded at least $10,000 in damages for each illegal abortion should they win.

Tuesday’s lawsuit is the latest abortion-related challenge to come before a federal court in recent months, with a high-profile case out of Mississippi having been taken up by the Supreme Court in May, rekindling a potentially major challenge to Roe v. Wade at the majority conservative court.

In the Texas case, the groups argue that if the law takes effect in September, it “will create absolute chaos in Texas and irreparably harm Texans in need of abortion services.”

“In particular, the burdens of this cruel law will fall most heavily on Black, Latinx, and indigenous patients who, because of systemic racism, already encounter substantial barriers to obtaining health care, and will face particular challenges and injuries if forced to attempt to seek care out of state or else carry an unwanted pregnancy to term,” they argue.

Noting a challenge in fighting the law, the lawsuit states that “the Legislature attempted to insulate its patently unconstitutional law from judicial review,” by preventing state officials — such as the attorney general, local prosecutors or the health department — from directly enforcing it and it instead “deputizes private citizens.” Still, the suit names Attorney General Ken Paxton, a Republican, as one of the defendants, as well as a number of other state officials who could play a role in enforcing the law.

CNN has reached out to Paxton’s office for comment on the lawsuit.

When Abbott signed the bill into law nearly two months ago, Texas joined South Carolina, Oklahoma and Idaho in codifying bans this year on abortion at the onset of a fetal heartbeat. Texas GOP state Sen. Bryan Hughes, the bill’s sponsor in the Senate, told CNN before the bill’s signing that “it was time for Texas to pass a heartbeat bill. We looked at what other states had done, looked at what the Supreme Court and other federal courts have said about abortion and what states can do, and took all that into account to come up with Senate Bill 8.”

Opponents, including state Democrats, have blasted the bill’s provisions, including the $10,000 sum that could go to people who win suits against individuals who allegedly help with violations of the bill, with Democratic state Rep. Nicole Collier saying earlier this year that “it’s just like a lottery, basically.”

“If this oppressive law takes effect, it will decimate abortion access in Texas — and that’s exactly what it is designed to do,” Nancy Northup, the president and CEO of the Center for Reproductive Rights, said in a statement on Tuesday.

“The state has put a bounty on the head of any person or entity who so much as gives a patient money for an abortion after six weeks of pregnancy, before most people know they are pregnant. Worse, it will intimidate loved ones from providing support for fear of being sued,” she added.