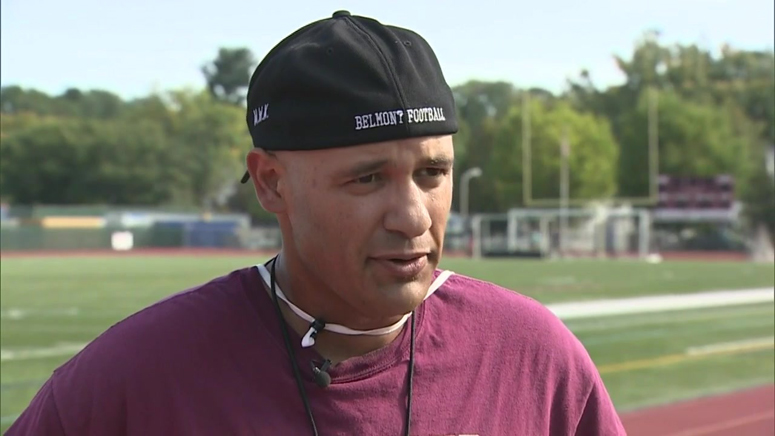 BELMONT, MASS. (WHDH) - The Belmont High School football coach is not letting cancer keep him from inspiring his team to victory.

Yann Kumin is known for being tough but this summer that toughness was put to the test when he was diagnosed with cancer in his throat.

“I had a visible and kind of a palpable mass on the side of my neck,” Kumin said. “Then after surgery, we were able to kind of determine that it was stage one squamous cell carcinoma of the tonsils and of one of my lymph nodes.”

Kumin said the diagnosis forced him to confront one of his greatest fears.

“I didn’t know if I was going to be able to coach this year and that was terrifying.”

Through all the pain, he said he was able to find strength and faith through football.

“Football is church for me, you know it really is,” he said. “It’s kind of an opportunity to kind of connect with whatever it is that you believe is the current running through the universe.”

Support for the football field fixture came from Belmont families and beyond.

When all his treatments were done, Coach Kumin triumphantly rang the MGH good luck bell and his players caught a glimpse of their inspiration.

“Him to go through that and you know, two weeks after he goes through his treatment, he’s here at lifts, he’s at camp he’s doing all this stuff,” high schooler Ryan Hoffman said at practice.

Kumin stared down mortality to teach life’s greatest lessons on the field.