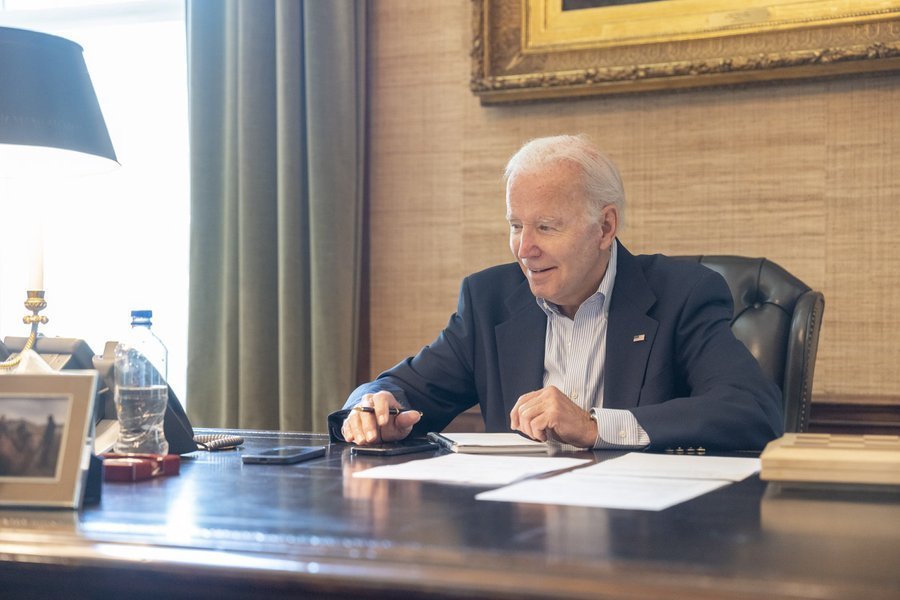 (CNN) — President Joe Biden’s Covid-19 symptoms “have improved,” his physician said Friday, but the President has taken additional medications to address his temperature and cough.

Dr. Kevin O’Connor said in a letter that Biden had a temperature of 99.4 degrees Thursday evening, which was treated with Tylenol.

“His temperature has remained normal since then,” O’Connor wrote.

He is also being treated with an albuterol inhaler “that he uses as needed,” O’Connor added, as well as “oral hydration.”

Biden’s symptoms continue to be a runny nose and fatigue. The President had a dry cough earlier Thursday, but he now has “an occasional non-productive, now ‘loose’ cough,” according to O’Connor.

The President continues to take Paxlovid, Pfizer’s antiviral drug. O’Connor confirmed that Biden has stopped using previously prescribed medications Crestor and Eliquis “during Paxlovid treatment and for several days after his last dose.” In order to prevent a drug interaction, certain medications like Crestor and Eliquis are avoided during Paxlovid treatments.

O’Connor reiterated in his Friday letter that he anticipates “that (Biden) will respond favorably,” to treatment. Biden will continue to isolate and be monitored “closely” by the White House medical unit.

“I got an update last night at 10:00 p.m. and he was doing just fine,” he said. Jha added that he would touch base with the White House medical team and speak with the President “directly this morning.”

“The symptoms were basically the same — again, he’s got a little runny nose, he’s got a bit of a dry cough,” Jha said.

Asked again whether any of Biden’s symptoms were getting worse, Jha told CNN, “Nope. As of 10:00 p.m. last night, no. It was the same symptoms, about the same level of mildness.”

Jha also downplayed concerns that the White House press corps has yet to be briefed directly by O’Connor.

“You have heard from Dr. O’Connor in the letter. We are fully committed to transparency here. You’re going to hear every day from Dr. O’Connor through written communication. He was going to put out his own statement with this assessment of how the President’s doing,” he said.

Jha added that many officials are in contact with Biden and “the American people will have a very full, complete picture of how the President is doing.”

Jha said they still “don’t know much” about where the President contracted the virus but said that tracing was underway for any close contacts of the President. He said he was not aware of any subsequent cases.

White House work continues
Biden tested positive for Covid-19 on Thursday morning, becoming the second US president to contract the virus during the two-and-a-half year pandemic. He continues to recover and work in isolation within the residence of the White House.

On Friday afternoon, Biden appeared virtually at a meeting with his economic team on gas prices, telling his team that he’s feeling better than he sounds.

“Let me start by apologizing for my voice, I’m feeling much better than I sound,” Biden said at the top of his remarks before moving on to the topic of gas prices. The President exhibited a deep voice in the video and was heard coughing while his advisers briefed. He also had a pack of cough drops on his desk, which he reached into after coughing.

Reporters, who were in the White House’s South Court Auditorium with the rest of the economic team in the meeting, asked Biden how he was feeling, to which he replied with a smile and a thumbs up.

Biden held a call with his national security team on Friday morning. And he also received a written message from President Xi Jinping of China “wishing him all the best” for his Covid-19 recovery, said National Security Council coordinator for strategic communications John Kirby.

Kirby also told reporters that Biden’s illness has had no impact on US national security decision-making.

In a series of updates on Friday, the White House said Biden spent Thursday evening calling Delaware Sen. Tom Carper, who also tested positive for Covid-19 and speaking with the hosts of events he had been scheduled to attend in Wilkes-Barre and Philadelphia, Pennsylvania. The White House also relayed that Biden signed the Formula Act into law on Thursday, which suspends tariffs on certain formula products amid the ongoing shortage.

Meanwhile on Friday, Vice President Kamala Harris took part in an extended conversation at the annual National Urban League conference in Washington. The vice president — who tested negative on Friday and is not exhibiting any Covid symptoms — was maskless throughout the conversation despite being considered a close contact to Biden.

A White House official had told CNN on Thursday that Harris would follow CDC guidelines, which recommend that vaccinated individuals wear a well-fitting mask for 10 days following the last contact. Harris appeared to be at least six feet away from Birmingham Mayor Randall Woodfin, who led the conversation and put her mask on as they exited the stage at the end. CNN has inquired why Harris was without her mask for most of the conversation.

First lady Dr. Jill Biden, who is also considered a close contact to the President, is not exhibiting any Covid symptoms and tested negative on Friday, her spokesman Michael LaRosa told CNN. She remains at home in Wilmington, Delaware, and plans to stay there until at least Tuesday.

White House officials have been preparing for months for what many viewed as the inevitability that Biden would come down with Covid.

A wave of cases has swept Washington through the spring and summer and as more and more of his top officials and members of his family contracted Covid, officials came to believe it was possible the President himself would get sick, even as they took steps to shield him from the virus.

White House officials had a loose plan in place for the day Biden tested positive, including informing the public when the tests were confirmed and releasing a letter from Biden’s physician daily about the President’s condition.