DHS temporarily suspends use of horse patrol in Del Rio 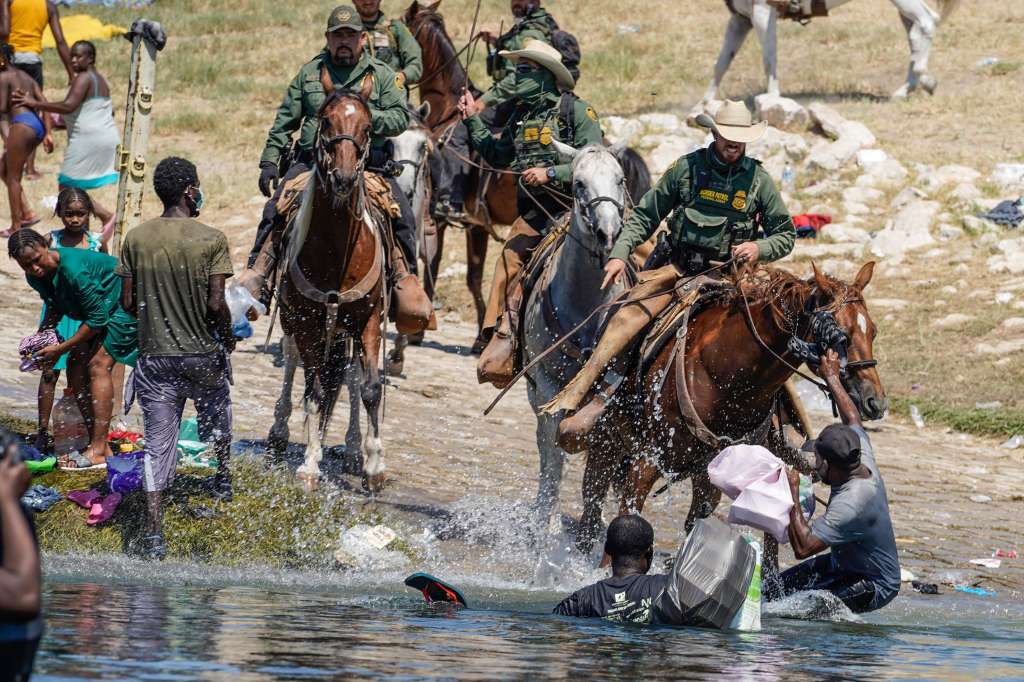 United States Border Patrol agents on horseback tries to stop Haitian migrants from entering an encampment on the banks of the Rio Grande near the Acuna Del Rio International Bridge in Del Rio, Texas on September 19, 2021. - The United States said Saturday it would ramp up deportation flights for thousands of migrants who flooded into the Texas border city of Del Rio, as authorities scramble to alleviate a burgeoning crisis for President Joe Biden's administration. (Photo by PAUL RATJE / AFP) (Photo by PAUL RATJE/AFP via Getty Images)

(CNN) — The Department of Homeland Security has temporarily suspended the use of horse patrol in the Del Rio, Texas, sector, a Homeland Security official told reporters Thursday, after stunning images from the scene prompted bipartisan criticism of the Biden administration’s handling of the crisis at the US-Mexico border.

An investigation was launched after video of Border Patrol agents on horse patrol aggressively confronting migrants, who are largely Haitian, surfaced earlier this week. Several top administration officials as well as congressional Democrats have expressed outrage over the images, taken by Al Jazeera and Reuters, which appear to show law enforcement officers on horseback, including authorities swinging long reins near migrants who crossed the border near Del Rio.

“We have ceased the use of the horse patrol in Del Rio temporarily. We’ll prioritize other methods for identifying individuals who might be in medical distress,” the DHS official said.

The official also told reporters Thursday that the department did not have intelligence to suggest there would be a surge of migrants flowing into the sector as has been seen over the last week. As of Thursday, thousands of migrants are estimated to remain at the Del Rio bridge in a crowded makeshift encampment. They sleep in the dirt, surrounded by growing piles of garbage, exposed to the elements and without much food and water, in hopes of being processed by the overwhelmed US Border Patrol.

Department of Homeland Security Secretary Alejandro Mayorkas has said he was “horrified” by the situation. Vice President Kamala Harris, who has been tasked with finding solutions to address root causes of migration, expressed horror at the images during a childcare event in DC on Tuesday. White House press secretary Jen Psaki said Monday that the White House was seeking more information on the “horrific” viral videos.

During a news conference earlier this week, US Border Patrol Chief Raul Ortiz said horse patrol units play an integral part in the security response in Del Rio and that long reins are used to ensure control of the horse. Ortiz, who said he has ridden horses for several years, also pointed to the difficulty of operating in a riverine environment on horseback.

Ortiz said he had asked that the horse patrol unit do an assessment on Sunday to find out if any individuals were in distress and to provide information and intelligence on the smuggling organization’s activities in and around the river.

“[B]ut we are going to investigate the facts to ensure that the situation is as we understand it to be, and if it’s anything different we will respond accordingly,” Ortiz said.

The White House’s response, thus far, has largely been focused behind the scenes as critics compare the Biden policy of deporting migrants to aggressive measures taken in the Trump administration.

President Joe Biden has not publicly addressed the situation since Tuesday, when he briefly responded to a shouted question on the matter as he departed the United Nations General Assembly.

“We will get it under control,” Biden said, declining to elaborate further.

Addressing the influx of migrants

DHS had been closely following the movement of migrants through the hemisphere and working with law enforcement partners in transit countries.

The department official added that the US is “working closely with the government of Mexico and our partners in US government to try to pull on that thread and see how we can enhance visibility into those organized movements.”

DHS officials declined to provide a number of how many migrants have been released into the US, saying it takes time to collect the data, but added that there are a number of reasons why individuals may not be expelled based on case-by-case determinations, such as vulnerability and limited capacity.

One official said “several thousand people” who were in Del Rio are believed to have returned to Mexico.

About two thirds of the population of migrants in Del Rio are families, according to DHS. There are some unaccompanied children but that’s “to a nominal degree,” a Homeland Security official said. The rest are single adults.

The Biden administration is still relying on a Trump-era border policy linked to the coronavirus pandemic that allows border authorities to swiftly remove migrants apprehended at the US-Mexico border. In recent days, the administration has ramped up those removals and increased the pace of repatriation flights to Haiti.

Many of the Haitians currently at the border are believed to have been living in South America after the 2010 earthquake in Haiti, but the toll of the coronavirus pandemic on the region fueled migration to the US southern border.

Haiti is also still reeling from an earthquake in August that resulted in more than 2,000 deaths and thousands more injuries, as well as the assassination of President Jovenel Moise in July. For those reasons, more than 50 Democratic lawmakers urged the Biden administration in a letter earlier this month to halt deportations to the country.