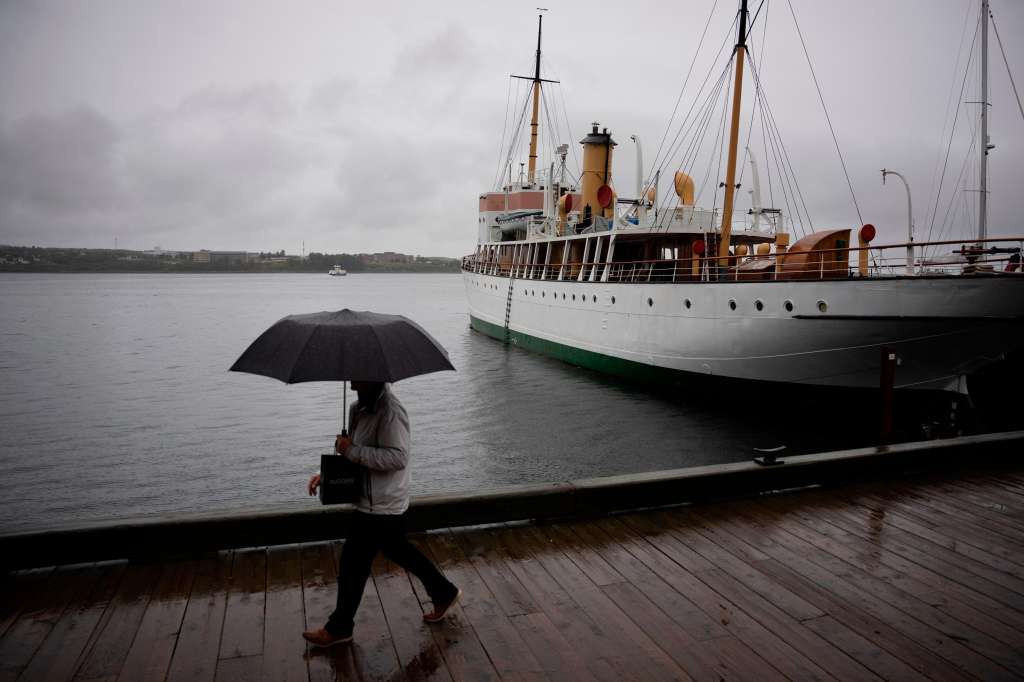 (CNN) — Hurricane-strength Fiona is ripping through Canada’s eastern seaboard after making landfall in Nova Scotia early Saturday, slamming the area with fierce rain and damaging winds and knocking out power for hundreds of thousands in what could be a “landmark” weather event for the country.

Fiona, now a post-tropical cyclone, had maximum sustained winds of 85 mph — the power of a Category 1 hurricane — at 8 a.m. ET Saturday, with its center over the Gulf of St. Lawrence after crossing Nova Scotia, the US National Hurricane Center said.

The storm has wiped out power to most of Nova Scotia and Prince Edward Island Saturday morning, with winds and rains extending far from the storm’s center. More than 540,000 outages were reported in Atlantic Canada, including to nearly all of Prince Edward Island’s 86,000 customers, according to utility tracker Poweroutage.com.

“Across the province, we’re hearing reports of damaged trees and power lines as the storm continues to pass through,” the Nova Scotia Emergency Management Office tweeted.

Officials along Canada’s Atlantic seaboard have urged those in Fiona’s path to be on high alert and prepare for the impact of the storm, which has already claimed the lives of at least five people and shut off power for millions as it battered multiple Caribbean or Atlantic islands this week.

“We were still making calls to residents (through late Friday) just to try to give some heads up that … you need to be ready to move at a moment’s notice if you don’t already move right then,” Brian Button, mayor of Newfoundland’s Channel-Port aux Basques, told CNN Saturday.

Fiona is on track to be an “extreme weather event” in eastern Canada, threatening with about two months’ worth of rainfall, forecasters in Canada said Friday.

“This could be a landmark event for Canada in terms of intensity of a tropical cyclone,” and it could even become Canada’s version of Superstorm Sandy, said Chris Fogarty, Canadian Hurricane Centre manager. Sandy in 2012 affected 24 states and all of the eastern seaboard, causing an estimated $78.7 billion in damage.

An unofficial barometric pressure of 931.6 mb was recorded at Hart Island, which would make Fiona the lowest pressure land-falling storm on record in Canada, according to the Canadian Hurricane Centre. Wind observations on Beaver Island in eastern Nova Scotia were recorded at 100 mph (161 km/h).

After passing through the Gulf of St. Lawrence, Fiona should reach Quebec’s lower north shore and Newfoundland and Labrador by late Saturday, the Canadian Hurricane Centre said. Hurricane-force gusts have been reported across parts of Maritime Canada, ranging from 70 to 95 mph (110 to over 150 kph).

Fiona had been a Category 4 storm early Wednesday over the Atlantic after passing the Turks and Caicos and remained so until Friday afternoon, when it weakened on approach to Canada. It became post-tropical before making landfall, arriving at the same time as a trough of low pressure and cold air to the north — much like Sandy did, according to Bob Robichaud of the Canadian Hurricane Centre.

“Sandy was larger than Fiona is expected to be even. But the process is essentially the same — where you have two features kind of feeding off each other to create one strong storm like we’re going to see overnight and into tomorrow,” he said Friday.

Hurricane-force winds extended up to 175 miles out from Fiona’s center while tropical-storm-force winds reached up to 405 miles out as of 8 a.m. ET, according to the US National Hurricane Center.

In the days leading up to Fiona’s expected arrival, officials ramped up services to assist those in need and implored residents to take caution.

“It has the potential to be very dangerous,” said John Lohr, the minister responsible for the Emergency Management Office for Nova Scotia, on Thursday. “Impacts are projected to be felt across the province.”

Shelters for residents have been established throughout Nova Scotia, including multiple in Halifax County, according to officials.

The area has not seen a storm this intense for about 50 years, according to Fogarty.

“Please take it seriously because we are seeing meteorological numbers in our weather maps that are rarely seen here,” Fogarty said.

Prince Edward Island officials also implored residents to prepare for the worst as the storm looms.

Tanya Mullally, who serves as the province’s head of emergency management, said one of the most pressing concerns with Fiona is the historic storm surge it is expected to unleash.

“Storm surge is certainly going to be significant. … Flooding that we have not seen nor can we measure against,” Mullally said Thursday during an update.

Canadian Hurricane Center modeling suggests the surge “depending on the area, could be anywhere from 1.8 to 2.4 meters (6-8 feet),” said Robichaud.

The northern portion of the island stands to bear the brunt of the storm due to the direction of the winds, which will likely cause property damage and coastal flooding, Mullally said.