Gay men are lining up as early as 2 a.m. for monkeypox vaccines. Many leave empty-handed 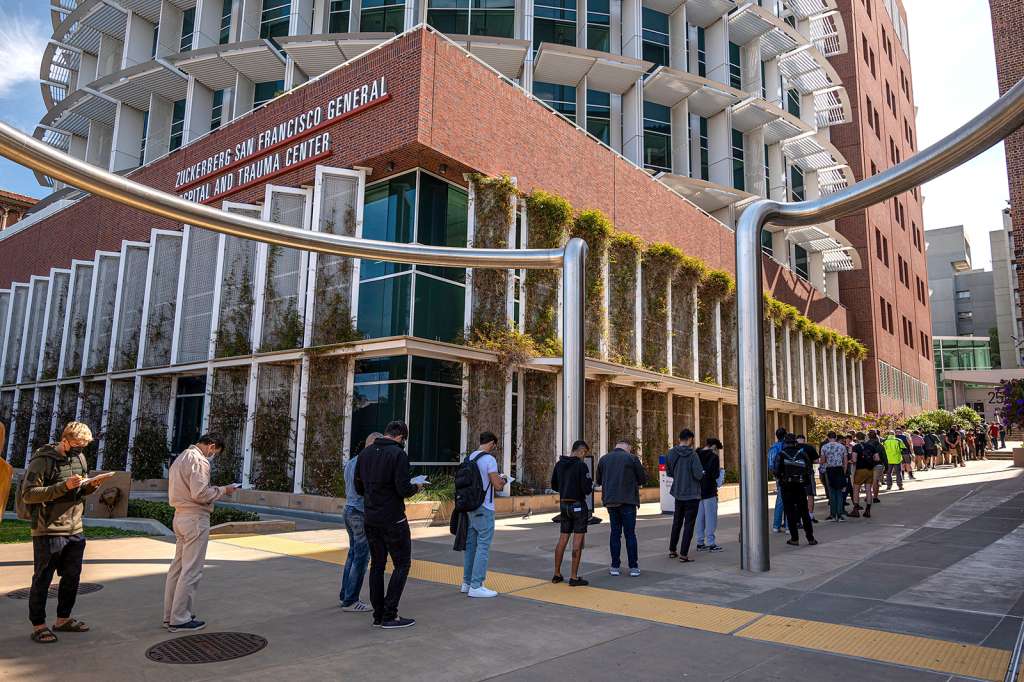 Residents wait in line to receive a monkeypox vaccination at the Zuckerberg San Francisco General Hospital And Trauma Center in San Francisco, California, US, on Tuesday, Aug. 2, 2022. Governor Newsom declared a state of emergency over the rapidly spreading monkeypox outbreak on Monday. Photographer: David Paul Morris/Bloomberg via Getty Images

(CNN) — The line begins to form before sunrise outside Zuckerberg San Francisco General Hospital, with some people arriving as early as 2 a.m., bringing fold-up chairs and blankets to protect against the Bay Area’s overnight chill.

They wear face masks, and keep a social distance from others, obeying the ground rules from the early days of the Covid-19 pandemic — when the desperate need for vaccines far outweighed what federal and state governments could supply.

This line of mostly men is waiting for the monkeypox virus vaccine. The illness is spreading rapidly and on Thursday the Biden administration declared it a public health emergency.

Many however will leave empty-handed as local hospitals and clinics have had to rely on an inconsistent and insufficient supply of vaccines, a dilemma that has infuriated patients and advocates.

San Francisco General opens the clinic doors at 8 a.m. and the line inches forward slowly. The hospital will distribute the available doses until the supply runs out.

For Cody Aarons, 31, it was his third attempt. He stood calmly with more than 100 people already in front of him.

“I was in New York for the past month for work, and I tried with their online portal system and was unsuccessful in getting a vaccine,” said the health care worker who thought he might have a better chance in San Francisco.

But 45 minutes after starting the day’s distribution, a hospital staff member passed by with an announcement. “Folks we have reached our limit for today,” he shouted. “However, we will try to find you more shots.”

Although with no guarantee of getting the monkeypox vaccine that day, Aarons — and just about everyone in line — stayed put.

“People want their vaccine,” said Rafael Mandelman, a member of the San Francisco Board of Supervisors. “I know one person who was in that line four different days before he finally got his vaccination.”

Mandelman, who got up at 4:30 a.m. and waited for hours before getting his vaccine shot days earlier, is frustrated with the rollout.

“After having come through a pandemic where we were able to discover a new vaccine, [and] distribute tens of millions of doses within a matter of months, the fact that with an existing known vaccine we cannot get more than these paltry little dribbles out is very frustrating to people,” he said.

In California, the vast majority of those infected — more than 98% — are men, with more than 91% of patients identifying as LGBTQ. Mandelman feels he and others in the gay community have been left to advocate on their own, without support from the federal government.

For health care workers, the outbreak is a frustrating new chapter after the punishing Covid-19 pandemic.

“At the peak of Covid vaccinations, we averaged 1,400 to 1,500 (doses) a day. So we are completely used to the mass vaccination process,” nurse manager Merjo Roca said.

But Roca and her staff are limited in what they can do given the vaccine shortage.

San Francisco health officials initially requested 35,000 doses, but say they’ve only gotten 12,000 from the federal stockpile. The state of California informed city leaders that San Francisco will receive 10,700 more in the next allotment, yet there’s no clear indication when those doses will arrive or how many will reach San Francisco General Hospital for distribution.

“I think one of our biggest challenges is really just the inconsistency of the supply,” Roca said. “Our vaccine clinic prides itself on being able to help and vaccinate people when they come through our doors. So, it’s super hard for all of our staff not to be able to do that and have to turn people away and not even have information to say when we will get the doses next.”

With many of those in line fearful about monkeypox’s rapid rise in cases, the clinic staff feel an added burden by not being able to deliver for everyone.

The government argues it acted urgently and with the data. And there are clear differences between the response now and the response to HIV/AIDS. But some advocates say the perceived lack of governmental urgency in addressing a public health crisis that impacts queer communities today mirrors what gay men were experiencing decades ago.

Between October 1980 and May 1981, five young men from across Los Angeles — described by the US Centers for Disease Control and Prevention at the time as “active homosexuals” — were diagnosed with an unusual lung infection and two of them died.

It was the first time acquired immunodeficiency syndrome — the devastating advanced-stage of HIV infection that would go on to claim the lives of more than 40 million people globally — was first reported in the US.

Exchanges between then-President Ronald Reagan’s press secretary and reporters in 1982 and 1983 indicate that the nation’s top officials and mainstream society viewed the disease as a joke and not an issue of great concern.

That stemmed from the perception of AIDS as a “gay plague” — a condition thought to be tied to the lifestyles and behaviors of gay men — even though cases had also been reported in women, infants, those with hemophilia and people who injected drugs.

Now, more than 40 years later, the gay community is once again grappling with feeling ostracized and neglected by their own government.

“We have a responsibility to not further stigmatize or politicize this issue for a community that has long faced many issues, has long been marginalized in our community,” said Tyler TerMeer, CEO of the San Francisco AIDS Foundation. “Dating all the way back to the earliest days of the HIV epidemic in our country, we saw our community abandoned by federal government in their response,” he said.

The foundation opened its doors in 1982 “in a moment of crisis in our community, when the federal government abandoned us … there are parallels between that moment and this one,” according to TerMeer.

“President Biden has called on us to explore every option on the table to combat the monkeypox outbreak and protect communities at risk,” said White House National Monkeypox Response Coordinator Robert Fenton. “We are applying lessons learned from the battles we’ve fought — from COVID response to wildfires to measles, and will tackle this outbreak with the urgency this moment demands.”

Monkeypox is a poxvirus, related to smallpox and cowpox and it generally causes pimple- or blister-like lesions and flu-like symptoms such as fever, according to the CDC.

The lesions typically concentrate on the arms and legs, but in the latest outbreak, they’re showing up more frequently on the genital and perianal area, which has raised some concerns that monkeypox lesions may be confused with STDs.

“I had between 600 to 800 lesions all over my body … It was like someone taking a hole-puncher all over my body. There were points where I couldn’t walk, couldn’t touch things,” said Kevin Kwong, who recently recovered from monkeypox after being diagnosed in early July.

He chronicled his ordeal on social media to bring awareness to the outbreak and now wants to “focus on destigmatizing the gay community.”

The first case of monkeypox in the US was announced on May 18 in a patient hospitalized in Massachusetts who had traveled to Canada in private transportation.

Less than three months later there are more than 7,000 confirmed cases of the outbreak across the country, identified in all but two states — Montana and Wyoming, according to the CDC.

Since the start of June, the CDC says it has been doing extensive education and outreach to the LGBTQ community, including working with local Pride organizations, releasing educational videos and creating campaigns on social media sites and dating apps popular in the gay community.

According to the World Health Organization, there have been 25,054 cases confirmed by a laboratory as of August 3, and 122 probable cases.

“For the moment this is an outbreak that’s concentrated among men who have sex with men, especially those who have multiple partners,” World Health Organization Director-General Tedros Adhanom Ghebreyesus said in late July when WHO declared monkeypox a public health emergency of international concern.

But while the outbreak has disproportionately impacted some gay communities, there is growing concern over the spread of infection.

The CDC in late July reported the first two monkeypox cases in children. Two other pediatric cases have been confirmed in Indiana, and another in Long Beach, California, earlier this week.

“This is a reminder that everyone, regardless of age or sexual orientation, can get monkeypox if they come into contact with the virus,” the City of Long Beach cautioned, echoing CDC guidance that while the risk of infection in children is low, they are “more likely to be exposed to monkeypox if they live in or have recently traveled to a community with higher rates of infection.”

There are over 500 cases of the outbreak identified across California, Florida, Georgia, Illinois, New York and Texas, the latest CDC figures show. New York has the distinction of having the most cases — 1,748 — followed by California with 826 confirmed cases.

“We need everyone to be rallying behind this issue and quickly,” TerMeer said “There is an imminent window of time by which we can get ahead of the fast spread of monkeypox across our country and that window continues to close.”