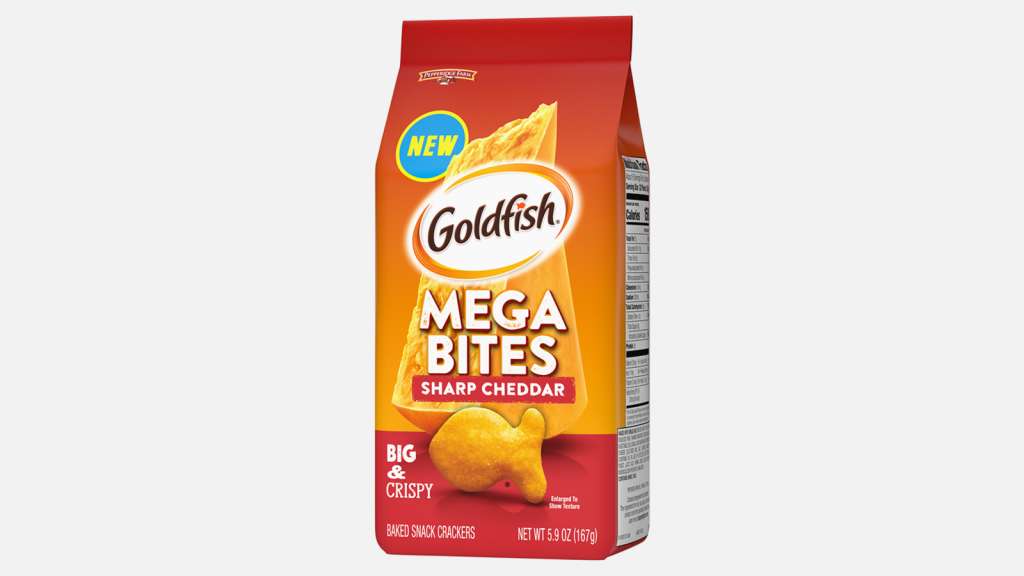 (CNN) — Goldfish is growing up.

Pepperidge Farm, which makes the crackers, is rolling out a new line of snacks called Goldfish Mega Bites, which is designed to appeal to adults. Mega Bites come in two flavors: Sharp Cheddar and Cheddar Jalapeno.

The Mega Bites crackers, which are larger than traditional Goldfish, are available for purchase now for a suggested retail price of $2.69 per 5.9 oz. bag.

During the pandemic, stressed out and home-bound consumers turned to snacks and comfort foods. The demand for nostalgic products helped boost sales of these types of products, and Goldfish was no exception.

Campbell Soup, which owns Pepperidge Farm, said that in 2020 sales of snacks jumped 5%, thanks in part to Goldfish. In the third quarter of this year, Goldfish sales continued to grow — even as other Campbell products declined. Campbell hopes Mega Bites will help inject even more growth into the powerful Goldfish brand by broadening its appeal.

“Nostalgia has and continues to be huge with snacking and providing a sense of comfort, especially the past two years,” Janda Lukin, Chief Marketing Officer at Campbell Snacks, told CNN Business. “With Mega Bites, we’re giving adult consumers — many of whom grew up eating Goldfish — a new way to experience their beloved snack.”

Pepperidge Farm launched Goldfish in the United States in 1962. At first, the snacks were targeted toward adults: Early on, the crackers were marketed as a bar snack, said Lukin. Julia Child, she noted, used to pair Goldfish with her upside-down martinis.

Since the 1990s, however, Goldfish has been marketed as a kids’ snack. But adults never stopped eating them.

In fact, “about 47% of Goldfish buyers don’t have children in their household,” said Lukin. “Capitalizing on this opportunity, we’ve been on a mission to expand our audience and become a beloved brand for adults,” she said.

To appeal to grown consumers, Goldfish has been experimenting with spicy flavors.

In the spring, Goldfish teamed up with Franks’ RedHot on a limited-time hot-sauce flavored line of Goldfish. And in September, it introduced another limited-time spicy flavor, Jalapeño Popper. That item launched in partnership with JNCO, maker of the the extra-wide jeans popular in the ’90s, to up the nostalgia factor.

Goldfish has also been returning to its roots by suggesting cocktail pairings with its signature snack. One recent video posted to the brand’s TikTok page showcased eating Goldfish Vanilla Cupcake Grahams while sipping an espresso martini.

“​​We’ve heard anecdotally that many adult Goldfish consumers enjoy the crackers alongside their favorite adult beverage,” Lukin said. “We worked with our chefs to develop some ways to perfectly pair different types of Goldfish with different beverages.” (Mega Bites, she noted, is not supposed to be a bar snack. Instead, it’s designed as a “hand-to-mouth munchable snack.”)

Campbell is not the only brand leaning on nostalgia to satisfy consumers. PepsiCo recently brought back Crystal Pepsi for a limited time, and McDonald’s returned Hi-C to restaurants last year after a nearly four-year hiatus.