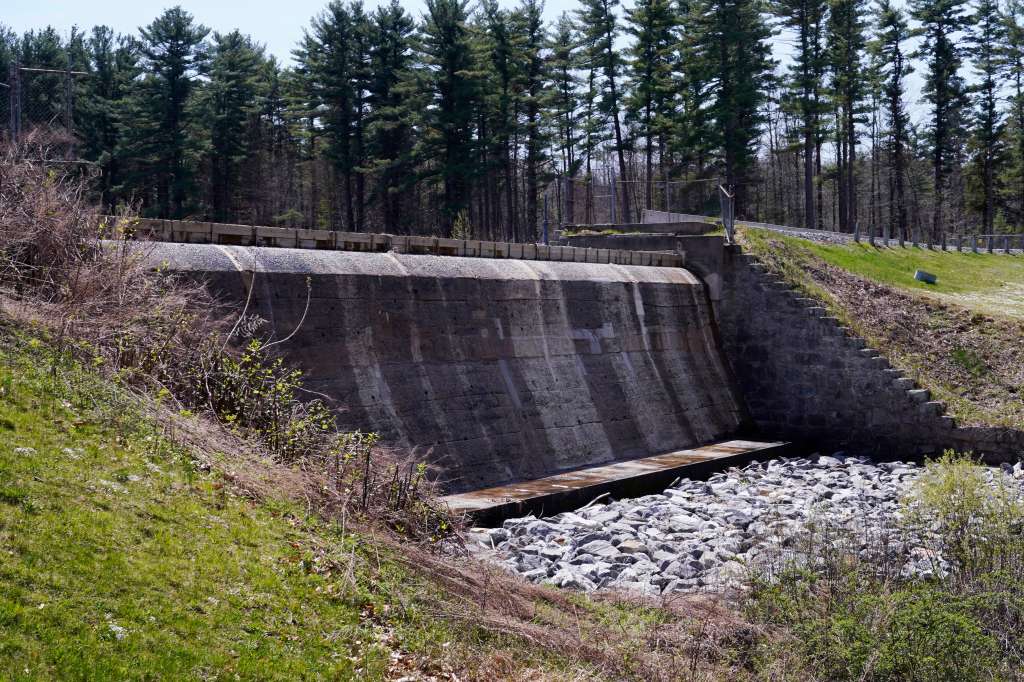 Water is held back at a spillway at the Massabesic Lake Dam, a regional source of public drinking water, Thursday, May 5, 2022, in Manchester, N.H. An Associated Press analysis has found a growing number of hazardous dams in poor condition across the U.S. The AP tallied more than 2,200 dams in poor or unsatisfactory condition that are rated as high hazard, meaning their failure likely would kill someone. Since 2019, the condition of the Massabesic Lake Dam has changed from fair to poor, according to the analysis. The lake covers over 2,500 acres in Manchester and Auburn, NH and has a storage capacity of about 15 billion gallons of water, according to a City of Manchester website. (AP Photo/Charles Krupa)

CONCORD, N.H. (AP) — The number of dams in in New Hampshire most at risk of failing has increased 51% in the past three years, according to an Associated Press analysis.

The state saw its numbers of high hazard dams in either poor or unsatisfactory condition go from 37 to 56, according to the analysis released Thursday. All but one of those dams had a poor rating, with only one rated as unsatisfactory.

Steve Doyon, the state’s chief dam safety engineer, said most of the dams were state owned. He attributed the increase to structural problems with dams like leakage, sinkholes and deterioration of the concrete. The other problem was that some spillways — which prevent water from overtopping a dam — were found to be unable to handle a historic flood.

“Folks would consider it disconcerting that a dam does not meet state criteria,” Doyon said. “But at the same time, it’s related to ensuring these dams have the capacity to withstand inflows from extreme events. Folks shouldn’t be concerned by an imminent threat because those extreme events are infrequent.”

An Associated Press analysis nationwide tallied more than 2,200 high-hazard dams in poor or unsatisfactory condition across the U.S. — up substantially from a similar AP review conducted three years ago. The actual number is likely even higher, although it’s unclear because some states don’t track such data and many federal agencies refuse to release details about their dams’ conditions.

The nation’s dams are on average over a half-century old and often present more of a hazard than envisioned when designed because homes, businesses or highways have cropped up below them. Meanwhile, a warming atmosphere can bring stronger storms with heavier rainfall that could overwhelm aging dams.

Many of New Hampshire’s dams were built decades, if not centuries ago, to provide water and power to textile mills and other manufacturing shops. But today, most structures that hold back ponds and lakes are for recreation, drinking water and hydropower.

More than 50 dams have failed in New Hampshire over the past 100 years, though deaths are rare. One exception was the Meadow Pond Dam, which failed in 1996, killing a woman and flooding a small neighborhood.

Some of the problems with high hazard dams go back years but have not been addressed because of a lack of funding or an inability or refusal by private owners to make repairs.

“New Hampshire’s increasing number of dams that are classified as high hazard puts our communities at risk and underscores the need for investments in the well-being and safety of our nation’s dams,” said Democratic U.S. Rep. Annie Kuster of New Hampshire, who introduced a bill last year that would spend nearly $26 billion to make the repairs that would enhance safety and increase the power generation capacity of the country’s dams. It also calls for removing any dams that have outlived their usefulness.

“Dams play a key role in our state’s waterways and energy infrastructure,” she said. “Especially as dams continue to age and deteriorate, it is critical to our communities and our economy that we invest in these dams to bolster clean energy production while taking steps to conserve our rivers and protect the public.”

Doyon said his program has not heard of any infrastructure funding going to dam safety. But he is optimistic the program may get as much as $35 million in pandemic funding to repair state-owned and possibly municipally-owned dams. He estimates that money could repair as many as 16 dams.

“Obviously, 16 off our list is significant but it’s not solving the whole problem,” he said.