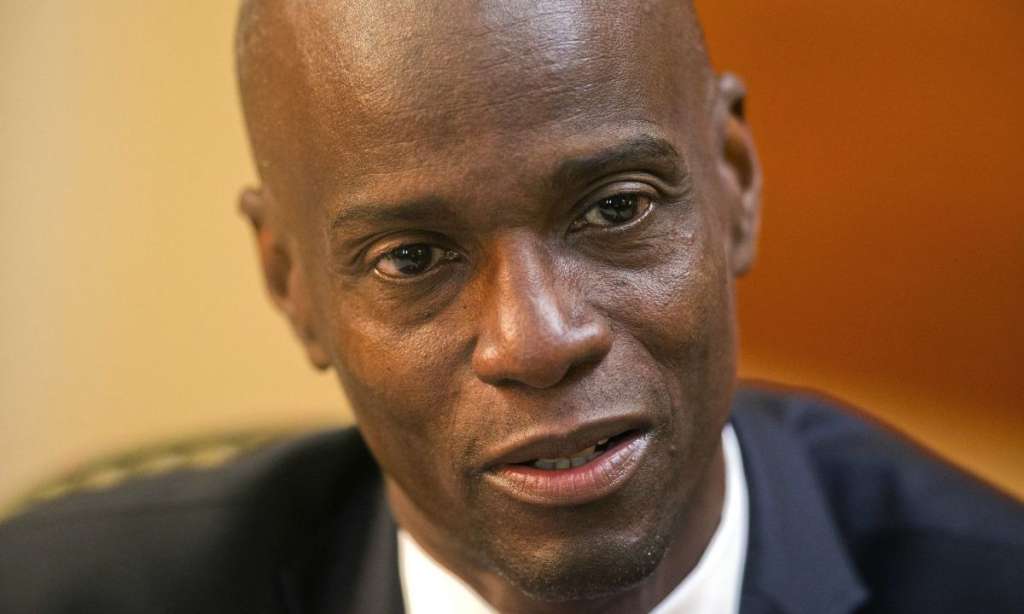 FILE - In this Feb. 7, 2020, file photo, Haiti's President Jovenel Moise speaks during an interview at his home in Petion-Ville, a suburb of Port-au-Prince, Haiti. (AP Photo/Dieu Nalio Chery, File)

PORT-AU-PRINCE, Haiti (AP) — A former Haitian senator, a fired government official and an informant for the U.S. government are the latest suspects identified as part of a sweeping investigation into the killing of President Jovenel Moïse.

The men are among five fugitives whom police say are armed and dangerous as they continued Wednesday to track down those suspected in the July 7 pre-dawn attack at Moïse’s private home in which the president was shot to death and his wife, Martine, wounded.

One of the suspects was identified as former Sen. John Joël Joseph, a well-known Haitian politician and opponent to the Tet Kale party that Moïse belonged to. In a video posted last year on YouTube, Joseph compared Moïse to the coronavirus, saying Haitians have died from hunger or been killed amid a spike in violence under his administration.

“Insecurity has infected every single Haitian,” he said.

Police identified the second suspect as Joseph Felix Badio. He previously worked for Haiti’s Ministry of Justice and joined the government’s anti-corruption unit in March 2013. The agency issued a statement saying Badio was fired in May following “serious breaches” of unspecified ethical rules, adding that it filed a complaint against him.

“This villainous act is an affront to our democracy,” the unit said in a statement Tuesday. “The authors, co-authors, accomplices must be hunted down, investigated and punished with the utmost rigor.”

The third suspect was identified as Rodolphe Jaar. He was born in Haiti, speaks English and has a college degree in business administration, according to court records. He is not a U.S. citizen.

Jaar uses the alias “Whiskey” and in 2013 was indicted in federal court in South Florida on charges of conspiring to smuggle cocaine from Colombia and Venezuela through Haiti to the U.S. He pleaded guilty and was sentenced to nearly four years in prison, according to court records.

At his 2015 sentencing hearing, Jaar’s attorney told the court that Jaar had been a confidential source for the U.S. government for several years before his indictment. He also agreed to cooperate with federal authorities and asked for a lighter sentence, saying he had a wife, 1-year-old and elderly parents.

In June 2000, Jaar filed a civil suit against the U.S. government seeking the return of a “large amount” of cash taken from him along with his passport and tourist visa when he was stopped in a rental car by customs agents. He was not arrested at the time, but Jaar said he learned he was under investigation for money laundering.

The government later returned his property and did not file charges. Jaar, who dropped the lawsuit, described himself in court papers as the owner of a successful import business in Haiti. He said his family has operated the enterprise since 1944.

Authorities in Haiti are investigating Moïse’s killing with help from Colombia’s government, which has said 23 of 26 former Colombian soldiers suspected in the slaying have been arrested and remain detained in Haiti. Léon Charles, chief of Haiti’s National Police, said three Haitians also have been arrested and at least three suspects killed.

The detained Haitians have been identified as James Solages, Joseph Vincent and Christian Emmanuel Sanon.

Police had said Sanon flew to Haiti in June aboard a private jet with several of the alleged gunmen. The 62-year-old is a Haitian physician, church pastor and Florida businessman who once expressed a desire to lead Haiti in a YouTube video and has denounced the country’s leaders as corrupt.

Charles said that Sanon was working with those who plotted the assassination and that Moïse’s killers were protecting him. He said officers who raided Sanon’s house in Haiti found a hat with a DEA logo, 20 boxes of bullets, gun parts, four license plates from the Dominican Republic, two cars and correspondence.

A business associate and a pastor in Florida who knew Sanon told The Associated Press that the suspect was religious and that they did not believe he would be involved in violence. The associate, who spoke on condition of anonymity for security reasons, said he believes Sanon was duped, describing him as “completely gullible.”

The associated added that Sanon had said he was approached by people claiming to represent the U.S. State and Justice departments who wanted to install him as Haiti’s president. He said the plan was only for Moïse to be arrested, and Sanon would not have participated if he knew Moïse would be killed.