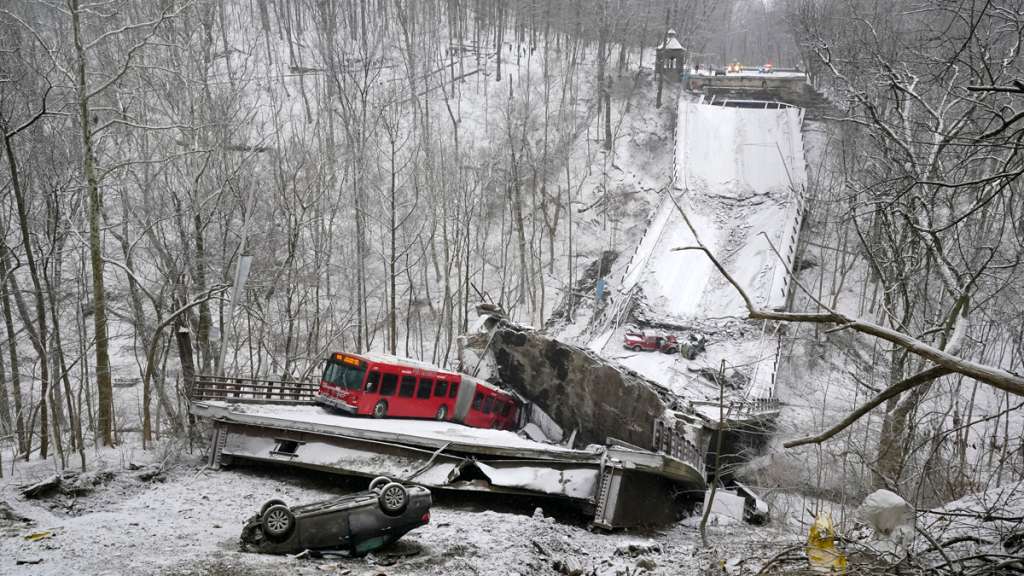 A Port Authority bus that was on a bridge when it collapsed Friday Jan. 28, 2022, is visible in Pittsburgh's East End. A two-lane bridge collapsed in Pittsburgh early Friday, prompting rescuers to rappel nearly 150 feet (46 meters) while others formed a human chain to help rescue multiple people from a dangling bus.(AP Photo/Gene J. Puskar)

The collapse came hours before President Joe Biden was to visit the city to press for his $1 trillion infrastructure bill, which includes bridge maintenance.

There were minor injuries from the collapse but no fatalities, said authorities, who also said they were flying drones to make sure no one is under any collapsed sections.

Police reported the span, on Forbes Avenue over Fern Hollow Creek in Frick Park, came down just before 7 a.m.

Sam Wasserman, a spokesperson for Pittsburgh Mayor Ed Gainey, said a few hours after the collapse that officials were evaluating the scene and an urban search-and-rescue team was still combing the area for any other possible victims.

He said most of the 10 people who were evaluated for injuries were first responders checked for exhaustion or because of the cold and snowy weather. Three people were taken to hospitals and none had critical injuries, Wasserman said.

Wasserman said the two-part, elongated Port Authority bus was on the bridge when it collapsed, with a driver and at least one passenger who were both evaluated by emergency medical responders.

City officials said the collapse caused a gas leak but the gas has since been shut off.

At the site of the collapse, Lt. Gov. John Fetterman called it “just an awful, surreal scene.”

“I hope it’s a wake-up call to the nation that we need to make these infrastructure investments,” Fetterman said.

Associated Press photographer Gene Puskar said the scene was reminiscent of the aftermath of an earthquake. There was a large crack on the end where the bus was, he said. There was also a car upside down in front of the bus.

In a statement, the White House said Biden would proceed with his planned trip to Pittsburgh.

“Our team is in touch with state and local officials on the ground as they continue to gather information about the cause of the collapse,” the statement said. “The President is grateful to the first responders who rushed to assist the drivers who were on the bridge at the time.”

Wasserman said the most recent inspection occurred in September but the report was not immediately available.