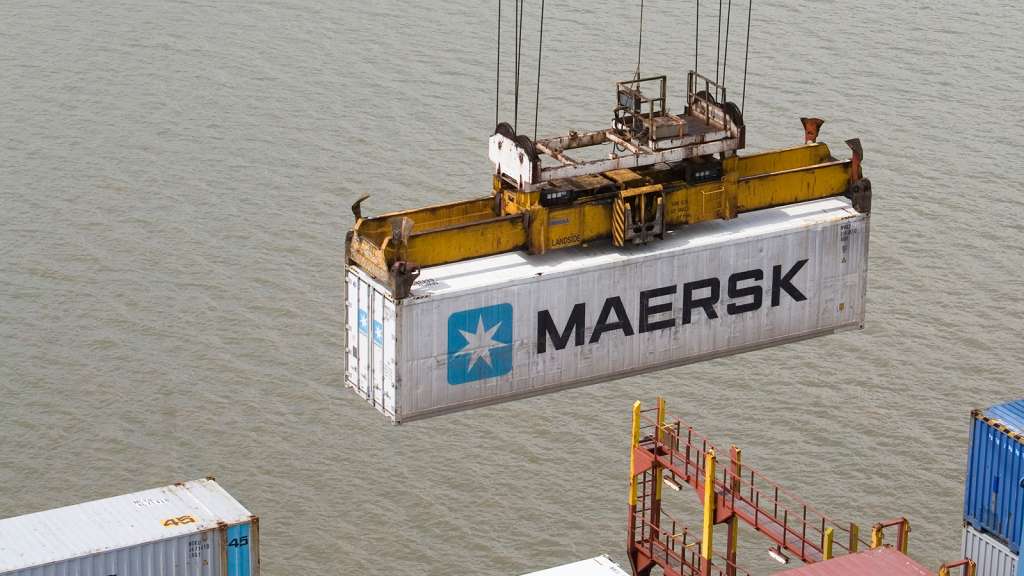 Maersk has suspended a number of crew members after allegations were posted online that a 19-year-old woman was raped aboard one of the company's vessels. Credit: Chris Ratcliffe/Bloomberg/Getty Image

(CNN) — International shipping giant Maersk has suspended five crew members and launched an investigation in the wake of an explosive blog post from a student at a federal service academy who said she was raped in 2019 on one of the company’s ships when she was 19 years old.

The anonymous author of the post said she is a current senior at the US Merchant Marine Academy (USMMA) in Kings Point, New York, which trains students to become commissioned officers in the armed forces and licensed Merchant Marine officers who work on ships transporting cargo and passengers worldwide.

She wrote last month that she was the only female on a Maersk ship during her Sea Year, a mandatory program when students work on commercial vessels and experience what the school describes as their “first real opportunity for self-reliance.”

In her account of what happened, she said that after leaving a port in the Middle East, engineers on the ship forced her and her fellow cadet, who is male, to down shot after shot of hard liquor one night, and that she woke up naked in her bed early the next morning and began to panic.

“There was blood on my sheets, and I knew immediately that I had been raped,” she wrote. “I was a virgin and had been saving myself, and as soon as I woke up I could feel that I was very sore and knew exactly what had happened.”

She wrote that her supervisor on the ship, a senior engineer in his 60s and the second in command of her department, had been sexually harassing her for weeks leading up to this night. She said while she couldn’t remember the actual rape due to the alcohol, she remembered this same man in her room, getting undressed, standing over her and forcing himself on her.

According to her post, he called her hours after she woke up and realized what happened and asked her to come to his room, saying they needed to talk. The woman said she went to his room and when she accused him of forcing himself on her, he denied it, saying he had just helped her back to her room and “Whatever you believed happened, you wouldn’t tell the captain would you?” She said he proceeded to put his hand on her thigh, and that when she got up to leave he told her no one would ever believe her.

“Back in my room I decided that the only thing I could do was to tough it out,” she wrote in her post on the website of Maritime Legal Aid & Advocacy, a nonprofit run by a USMMA graduate who said he was a victim and witness of sexual harassment and abuse on a Maersk ship. “No one was going to believe me, and toughing it out was the only option I felt like I had. I was trapped.”

For the next 50 days, she said she had to continue to work for the man who had raped her — seeing him every day.

What she says prompted her to speak out

While she confided in the other USMMA cadet onboard about the alleged rape, she didn’t officially report it at the time. But upon returning to campus and working as a victim’s advocate, she learned of at least nine other female students currently enrolled at the academy who said they had been raped during their Sea Year. This prompted her to speak out, she said, and her story quickly made rounds in the industry and federal government.

“She was sickened by the number of young women getting raped at sea,” said her attorney Ryan Melogy, founder of the nonprofit that published her story. “Nothing was being done about the problem. She wants to see real change and real accountability for what happened to her and far too many others.”

Her post has also sparked media attention and dozens of comments expressing support and sharing similar experiences from both men and women, including alumni, students, academy parents and others in the maritime industry.

CNN Investigates: Police officers convicted of rape, murder and other serious crimes are collecting tens of millions of dollars during retirement

Denmark-based Maersk, which is the world’s largest container shipping company, said in a statement issued Friday, as previously reported in Danish and industry media, that its US subsidiary is working closely with the academy, the labor unions that represent the officers and crew, and the US government, and that five crew members would remain suspended until the inquiry is complete.

“We are shocked and deeply saddened about we have read. We take this situation seriously and are disturbed by the allegations made in this anonymous posting which has only recently been brought to our attention,” said Bill Woodhour, CEO of Maersk Line, Limited, the company’s US subsidiary. “We do everything we can to ensure that all of our workplace environments, including vessels, are a safe and welcoming workplace and we’ve launched a top to bottom investigation.”

The U.S. Maritime Administration, which oversees the academy, said in a statement that it was aware of the allegation and that the USMMA Superintendent referred the blog post to the Coast Guard Investigative Service the day after it was published. “We have zero tolerance for sexual assault and sexual harassment at USMMA and in the maritime industry,” the statement said. “As we determine the appropriate steps required to increase and ensure the safety of USMMA students, we pledge to listen to and work closely with the entire USMMA community including students, parents and alumni.” A spokesperson for the agency also noted that the woman said in her post that she did not choose to report the alleged assault and said that the academy and government officials would be undertaking a review of the current requirements imposed on commercial vessels to ensure the safety of students.

Sea Year has been previously suspended

The federal government said last year that reports of sexual assault of academy students had decreased in the 2018-2019 academic year but that there were nine allegations of sexual assaults during this time, as well as two claims of sexual harassment and one report of retaliation.

The Department of Transportation also noted that the school’s culture remained “heavily influenced by the higher ratio of men compared to women” — making some female students feel like they have to act like “one of the boys” — and said there are still a number of reasons victims don’t feel comfortable coming forward, including “fear of reprisal from peers, social stigmatization, and ostracism.”

The woman behind the blog post wrote that of more than 50 women in her senior class at the academy, she has “not spoken to a single one of those women who has told me that she has not been sexually harassed, sexually assaulted, or degraded at some point during the last 3 years at the Academy or during Sea Year. Most people, and even the leaders of our school, do not seem to understand how serious this problem is, especially at sea.”

Prior to Maersk’s announcement about its investigation, the US Deputy Secretary of Transportation and acting maritime administrator co-authored a letter posted on the school’s website expressing the agency’s “unwavering support” for the woman who came forward.

Congressman Tom Suozzi and US Sen. Kirsten Gillibrand also issued a statement last week demanding an immediate investigation and saying they will “continue to work closely with the Merchant Marine Academy to put systems in place to ensure timely and thorough reporting.”