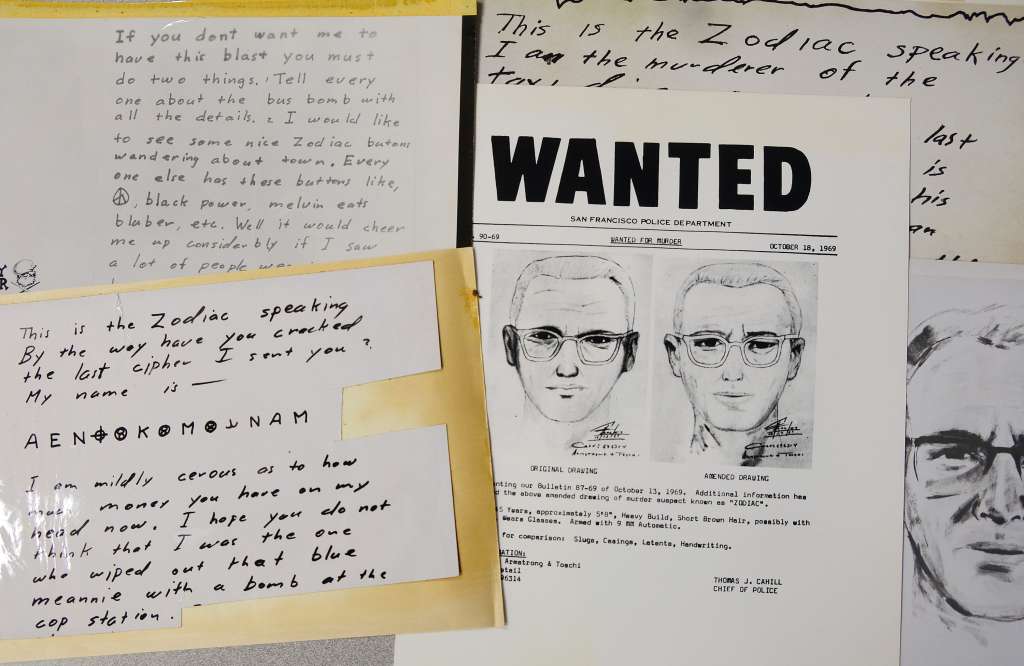 FILE - In this May 3, 2018, file photo, a San Francisco Police Department wanted bulletin and copies of letters sent to the San Francisco Chronicle by a man who called himself Zodiac are displayed in San Francisco. (AP Photo/Eric Risberg, File)

(CNN) — Law enforcement agencies said they are still investigating the Zodiac Killer case as an independent group of cold-case investigators came forward Wednesday to claim they had solved the mystery of who was behind the decades-old serial murders.

The Case Breakers, a team of 40 former law enforcement investigators, said they identified the man they believe is the Zodiac Killer using new physical and forensic evidence and information from eyewitnesses, according to a press release.

The group also filed court affidavits and secured decades of pictures from the man’s former darkroom, Case Breakers said. They named the man in the release, saying they believe he passed away in 2018.

CNN’s attempts to reach out to the family members of the named individual have been unsuccessful.

The Zodiac Killer is believed to be responsible for at least five murders in Northern California from 1968 to 1969.

In response to the new claims, the San Francisco Police Department (SFPD) confirmed to CNN that it is still an open investigation.

“We are unable to speak to potential suspects as this is still an open investigation,” the SFPD said in a statement.

The FBI, which has been supporting local law enforcement in the investigation, also did not acknowledge the claims.

“The Zodiac Killer case remains open. We have no new information to share at the moment,” the FBI said in a statement to CNN.

The Case Breakers also said in the release that the man is responsible for the 1966 killing of Cheri Jo Bates in Riverside County, California.

While the Riverside Police Department could not comment on the man identified by the Case Breakers, RPD public information officer Ryan Railsback said the Zodiac Killer is definitely not the person responsible for the death of Bates.

The only link the Bates murder had in common with the Zodiac Killer was a handwritten letter received in mail claiming responsibility, Railsback said.

The Zodiac Killer, who was never caught, gained notoriety by writing letters to police and local media boasting of the killings up until 1974.

Claiming to have killed as many as 37 people, he also wrote some letters in code and included bloody bits of clothing to use as proof of the acts.