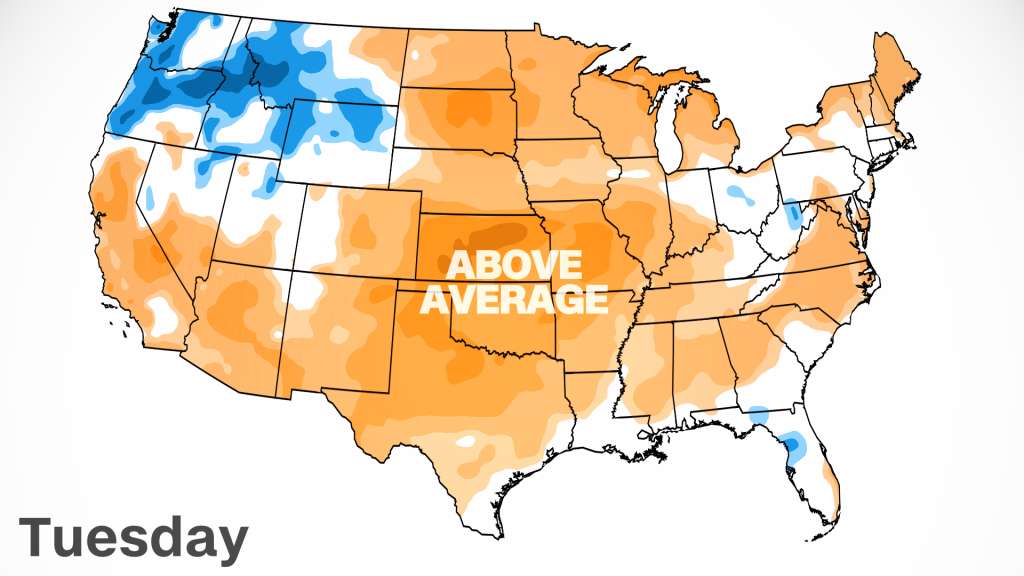 (CNN) — It will be 77 degrees warmer in parts of Texas on Tuesday than it was last week.

The rapid thaw comes just days after the Deep South looked and felt like a frozen tundra, with temperatures in the 70s supplanting dangerous sub-zero temperatures that lasted several days.

“It’s been a roller coaster across the area after being cold for so long,” says Fort Worth National Weather Service meteorologist David Bonnette.

“Normally, we are used to temperatures in the 60s, not a 60-degree temperature swing,” says Bonnette.

San Angelo and Wichita Falls also expect a 70-degree temperature swing. Waco and Abeline were both below zero on the morning of February 16 and will be in the upper 70s on Wednesday.

Many cities in other states also will go from temperatures 50 degrees below normal to those 20 degrees above normal.

Oklahoma City had a low of 14 below zero on Tuesday and will get up to 71 on Monday afternoon. That’s an 85-degree swing. And Shreveport, Louisiana — which hit 1 degree on Tuesday morning — will warm to near 70 degrees on Tuesday.

This wasn’t a week to be taken lightly. Several Texas cities endured their longest stretch of below-freezing temperatures, and millions of people experienced it in homes without electricity, heat or water.

The meteorology was definitely extreme, though not unprecedented for Dallas. While the city broke several daily records for the cold temperatures, the all-time cold records still stand.

What was unprecedented was the snowball effect of misery that occurred because of the weather, says Bonnette.

“We had a snow event on top of a cold weather event, then power outages, pipes bursting, no water and another snow event. It lasted so long,” he says.

Nearly a week later, nearly 9 million are still facing water disruptions, and many are still told to boil water before drinking. Houston went 44 consecutive hours with temperatures below freezing and will now enjoy temperatures in the 70s this week.

There have been at least 56 confirmed deaths reported across 10 states. The majority of those have been in Texas, resulting from hypothermia and carbon monoxide poisoning. As of Monday morning, about 10,000 homes still had no power.