Jen Psaki signs off as White House press secretary: ‘Thank you for making me better’ 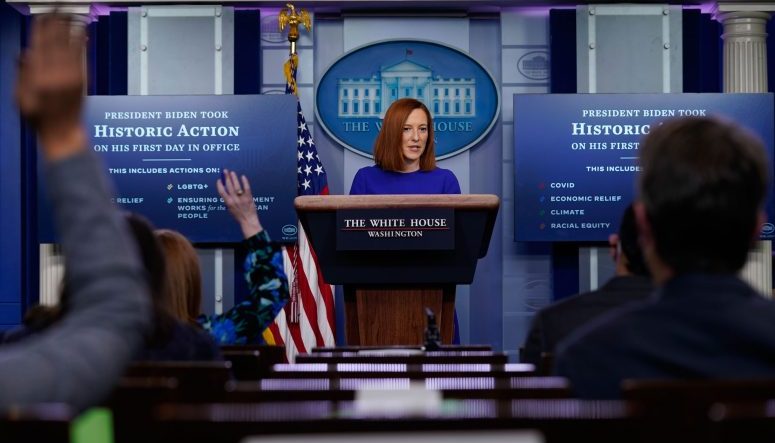 Psaki thanked press office colleagues and members of the media, telling the reporters, “You have challenged me, you have pushed me, you have debated me, and at times we have disagreed. That is democracy in action. That is it working.”

Psaki’s successor, Karine Jean-Pierre, confirmed on Friday that she will continue to hold regular briefings.

Embedded in their remarks on Friday is a stark difference between presidents and parties. In about 16 months working on behalf of President Joe Biden, Psaki held a greater number of briefings than all of President Donald Trump’s press secretaries combined. The Trump-era total was 205, according to Martha Joynt Kumar, director of the White House Transition Project. Kumar counted 58 briefings by Sean Spicer, 107 by Sarah Sanders, zero by Stephanie Grisham, and 40 by Kayleigh McEnany during a four-year period.

“Psaki has restored honor, dignity and class to the White House briefing room after four years of Donald Trump press secretaries, who seemed more interested in picking fights and criticizing the media than effectively communicating that administration’s policies and agenda,” Poynter’s Tom Jones wrote in a column about her departure.

Of course, Trump’s spokespeople were doing what he wanted. And Psaki was doing what Biden wanted -— restoring a pre-Trump sense of normal. “She came in committed to holding daily briefings — and gaggles if they were on the road,” Kumar said. “When you count workdays without weekends and holidays, they held briefing sessions 91% of the days.”

Conservatives (some of whom watched Psaki’s briefings live on Fox) criticized Psaki for dodging questions. Liberals celebrated her for neutralizing loaded questions (including some asked by Fox) and defending Biden’s agenda. White House reporters appreciated her accessibility, though it didn’t make up for Biden’s relative lack of press conferences and interviews.

Washington Post media critic Erik Wemple tallied the number of appearances that Psaki made as press secretary on various networks and said “what sticks out here is the evenhanded treatment among networks, particularly Fox News.” On Fox last Sunday, Psaki said her objective has been “speaking to the public and certainly engaging in and valuing a free press.”

Kumar, a regular presence in the briefing room, told me Psaki excelled as a briefer “because she came in well prepared for the job.”

“Perhaps her most important experiences were: 1) serving as State Department spokesperson and 2) learning the rhythms of a White House during the Obama years,” Kumar said. “She learned in those years to listen to reporters as an early warning system for political and policy trouble the White House team may not have spotted.”

“She also learned to think like a reporter as she prepared for the briefing,” Kumar added. “In the State Department, she learned the resonance of language and the importance of each word when you are speaking for the president.”

How will the role change?

Now Psaki is heading to TV land, specifically MSNBC — though, as I reported on last Sunday’s “Reliable Sources,” she hasn’t signed any deal yet, and she won’t be starting any new role until the fall. Insider’s Claire Atkinson described the role-in-waiting as a “global position that has her appearing on NBC News’ MSNBC and the company’s streaming service Peacock.”

Her successor Jean-Pierre is a natural fit behind the White House podium, since she has filled in for Psaki on multiple occasions. But KJP (as she is known among White House reporters and on Twitter) is taking on the press secretary role at a very interesting time. Biden is shifting his language toward the GOP and the “ultra-MAGA” movement. He is becoming much more overtly political as the midterms come into focus. Jean-Pierre, who is already the subject of conservative criticism for past tweets, will be front and center.

Psaki said Friday that Jean-Pierre will bring “her own magic, her own brilliance, her style to this briefing room.”