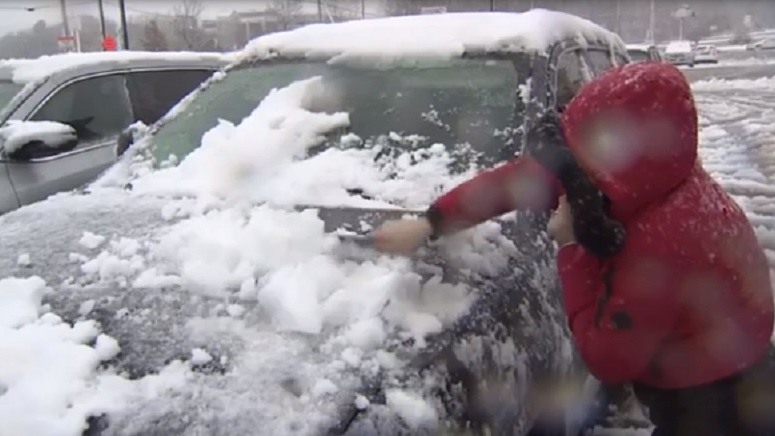 PORTLAND, Maine (AP) — Many motorists have witnessed this harrowing moment during winter driving: A sheet of ice lifts off a truck’s rooftop, somersaults through the air, and crashes into moving traffic.

For all of the snow and ice in Maine, there’s no criminal penalty for motorists who don’t bother to clear it off the roofs of their vehicles.

Maine lawmakers have tried unsuccessfully to change that, and the Legislative Council will consider a new proposal this week. The council will decide whether to forward the bill to the Legislature.

In New Hampshire, it took a young woman getting killed by a flying chunk of ice for the state to adopt a law requiring motorists to clear snow and ice off their cars before getting on the road.

The sponsor of the Maine proposal, Rep. Dustin White, R-Mars Hill, said he wants to prevent such a situation in his state.

“This is an increasing problem in Maine that requires action before tragedy strikes,” White said. “What should be a common sense act is causing numerous preventable accidents on our roadways,” he added.

The problem made the news this week in New Hampshire, where a box truck driver pleaded guilty in an incident in which ice and snow sailed off his vehicle and seriously injured a motorist. The driver underwent surgery to remove pieces of glass from his eyes.

Also this week, a chunk of ice smashed a car’s windshield in Brewer, Maine. The driver was unhurt in that incident.

In New Hampshire, the Legislature passed Jessica’s Law in 2001 in response to the death of 20-year-old Jessica Smith. She was killed when ice flew off the top of a truck and hit another truck that careened into her lane, causing a head-on collision. About 10 other states have similar laws.

In Maine, current law requires motorists to clear their windshields and side windows so they can see to drive in the snow, but there’s no requirement that ice and snow be fully removed. Prior attempts to strengthen the law have failed, most recently last session when a similar bill died in committee.

Law or no law, Jeffrey D’Amboise urged motorists to take the time to clear off their vehicles. He said the incident involving his car in Brewer could’ve been much worse.

“This could’ve been a tragedy had somebody been sitting in my passenger side as the inside of the car is full of shattered glass,” he told WABI-TV.