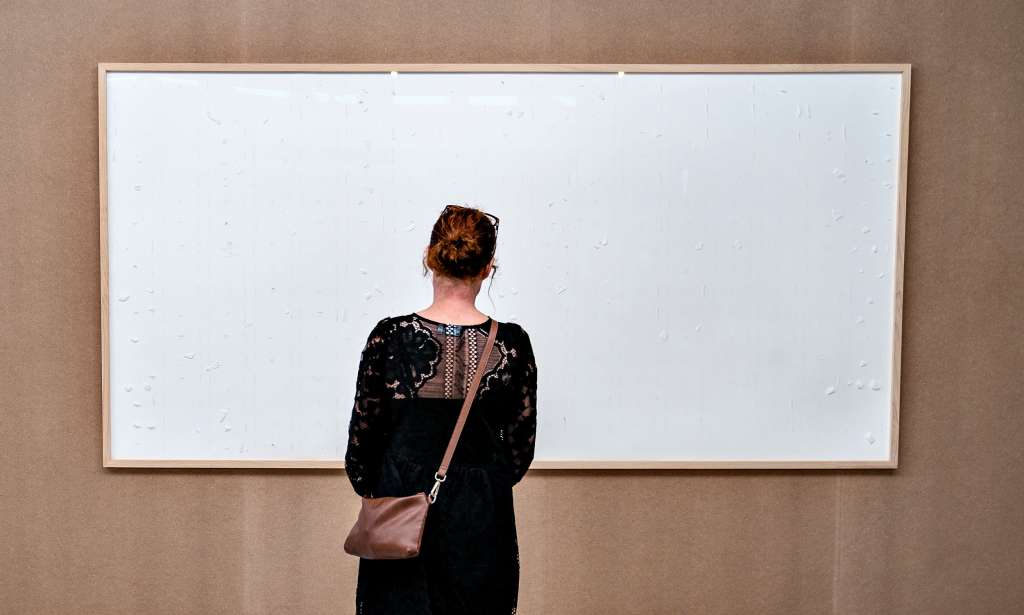 Mandatory Credit: Photo by Henning Bagger/EPA-EFE/Shutterstock (12473532a) An empty picture frame, an artwork titled 'Take the Money and Run' by Danish artist Jens Haaning, in on display at the museum Kunsten in Aalborg, Sweden, 28 September 2021. The frame should have been filled with around 550.000 Danish kroner in cash, which is supposed to match the average annual salary in respectively Austria and Denmark. Yet, when the art pieces arrived at the museum in Aalborg last week and staff members began unpacking the frames, there was no money in sight, only the empty frames and the tape, which was supposed to hold the money in place. Danish artist Jens Haaning is currently in possession of the cash that should have been inside the frames. The museum loaned him the money, which he is contractually bound to return to the museum, when the exhibition closes on 14 January 2022. Artwork 'Take the Money and Run' by Danish artist Jens Haaning, Aalborg, Denmark - 28 Sep 2021

Part of Massachusetts’ future will be defined by how employers and the higher education sector adapt to a changing, more diverse workforce and the characteristics of a new generation who seek flexibility and equity in the professional realm, stakeholders told a commission studying the future of work in the state.

Lawmakers, Baker administration officials, higher education officials, and nonprofit leaders gathered in Plymouth Tuesday morning for a virtual Future of Work Commission hearing focused on post-pandemic employment and economic security. The commission, chaired by Sen. Eric Lesser and Rep. Josh Cutler, has held four public meetings as it prepares a report on the future of work in the state.

“Employers also want to be sure that learning can be applied. We call it experiential education in higher education, but it’s internships or apprenticeships or professional apprenticeships, work study, or service learning or research projects,” Clark said. “That’s what employers are looking for as well and we absolutely agree.”

Clark said these qualifications are attractive to businesses as the state faces a talent shortage “of historic proportions” which he said will become more pronounced over time.

“What have we learned throughout the pandemic and from employers and in this talent shortage? Universities need to build better bridges to work, integrate career development into our curriculum,” Clark said. “But to do this well, we have to forge better and deeper partnerships with businesses, we have to invite them in, we have to listen to them, we have to allow for them to comment on and influence our curriculum.”

“This has forced companies seeking those workers to highlight benefits, beyond health care and pension plans, but to highlight flexible schedules, remote work, tuition reimbursement and higher wages,” she said.

Generation Z, people born between the mid-to-late 1990s to the early 2010s, presents new challenges and opportunities for employers. Clark said the generation is broadly defined by three characteristics: a need for flexibility, pragmatic approaches to school and life, and a demand for equity.

Addressing the educational needs of Generation Z is “critical,” Clark said, and institutions of higher education are presented with geographic and demographic difficulties — more students are coming from gateway cities and the population is becoming more diverse.

“Addressing the educational needs of that segment, that diverse segment of our population is critical,” Clark said. “And if there’s one thing that you might underscore from my presentation today, it’s that we cannot leave that population behind. If we do, our state will be in decline.”

As each year passes, the chance for a young person to achieve the American dream is slipping away as a result of “astronomical increases in the cost of living, health care, child care, and insufficient incomes,” Murray said.

“These aren’t new problems but the gap that the pandemic showed us here has exacerbated and it continues to get greater,” she said. “It’s getting more difficult for so many more people.”

On the health care front, Murray says costs continue to “skyrocket” and the pandemic has exposed many problems with the system that make it more difficult for people to afford quality care.

“We need a comprehensive overhaul of how people access health care, we need a system that cares for both the physical and mental health of everyone, both preventive and long-term care, and that includes the cost of prescription drugs,” she said. “People should not have to choose their health care over food or paying for their home.”

Murray pointed to billions in American Rescue Plan Act Funding that state legislators are in the process of deciding how to spend as an opportunity to invest in things like life sciences, health care, and housing.

The former lawmaker said the state didn’t have access to those kinds of funds while navigating the fallout of the Great Recession.

“We had to do some layoffs. We made very hard decisions, dropping three and a half billion dollars within three months. If we had had the federal money, we wouldn’t have had to do that,” Murray said. “We wouldn’t have put people out of work, people would have stayed in their homes, two-parent working families would have stayed in their homes, and instead we lost all of that. Now, we’re trying to rebuild.”

And leaving people in poverty or dealing with trauma or depression can affect the way they think and behave, Economic Mobility Pathways (EMPath) President and CEO Elisabeth Babcock said.

“It is, in essence, like having a set of leg weights at the start of a race, where individuals who come to that race without those leg weights just have a very different experience of the pathway forward than individuals who are under stress,” Babcock said.

Babcock said it is difficult for people who are moving in and around the poverty line to sustain forward momentum. There is plenty of evidence, Babcock said, about interventions that can help get people into a job, or training programs that lead to even higher quality work.

“But what we don’t have evidence of is the ability to be able to connect with individuals to give them the skills to actually run that race with those leg weights on so that they actually reach the middle class and maintain their place in the middle class, and potentially beyond,” she said.

Murray said Massachusetts must invest in its residents so that they can “live, thrive, stay healthy, and retire here.”

“Massachusetts must reimagine education and invest in our core industries and our emerging economy,” she said. “There’s no question it’s a tall order but we have the benefit of strong leadership, we have the fortune to be in a very strong fiscal situation, and we have the vision to take the step forward where other states hesitate.”