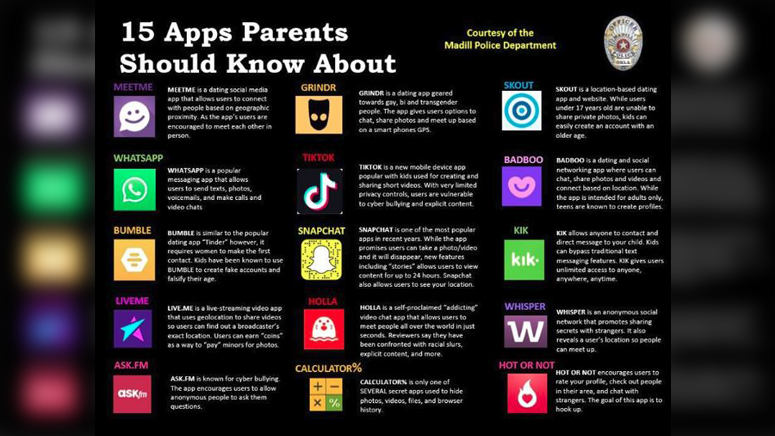 (WHDH) — Some apps are more dangerous than others when it comes to keeping your kids safe, police say.

Ahead of back to school, a police department in Oklahoma provided a list of apps parents should warn their kids about if they want to have them on their phones.

According to the department:

MeetMee is a dating social media app that allows users to connect with people based on geographic proximity. As the app’s users are encouraged to meet each other in person.

WHatsApp is a popular messaging app that allows users to send texts, photos, voicemails, and make calls and video chats.

Bumble is similar to the popular dating app “Tinder” however, it requires women to make the first contact. Kids have been known to use Bumble to create fake accounts and falsify their age.

Live.Me is a live-streaming video app that users geolocation to share videos so users can find out a broadcaster’s exact location. Users can earn “coins” as a way to “pay” minors for photos.

ASK.FM is known for cyberbullying. The app encourages users to allow anonymous people to ask them questions.

GRINDR is a dating app geared toward gay, bi, and transgender people. The app gives users options to chat, share photos and meet up based on a smart phone’s GPS.

TIKTOK is a new mobile device app popular with kids used for creating and sharing videos. With very limited privacy controls, users are vulnerable to cyberbullying and explicit content.

SNAPCHAT is one of the most popular apps in recent years. While the app promises users can take photo/video and it will disappear, new features including “stories” allows users to view content for up to 24 hours. Snaphat also allows users to see your location.

HOLLA is a self-proclaimed “addicting” video chat app that allows users to meet people all over the world in just seconds. Reviewers say they have been confronted with racial slurs, explicit content, and more.

CALCULATOR% is only one of SEVERAL secret apps used to hide photos, video files, and browser history.

SKOUT is a location-based dating app and website. While users under 17 years old are unable to share private photos, kids can easily create an account with an older age.

BADBOO is a dating and social networking app where users can chat, share photos and videos and connect based on location. While the app is intended for adults only, teens are known to create profiles.

WHISPER is an anonymous social network that promotes sharing secrets with strangers. It also reveals a user’s location so people can meet up.

HOT OR NOT encourages users to rate your profile, check out people in their area, and chat with strangers. The goal of this app is to hook up.