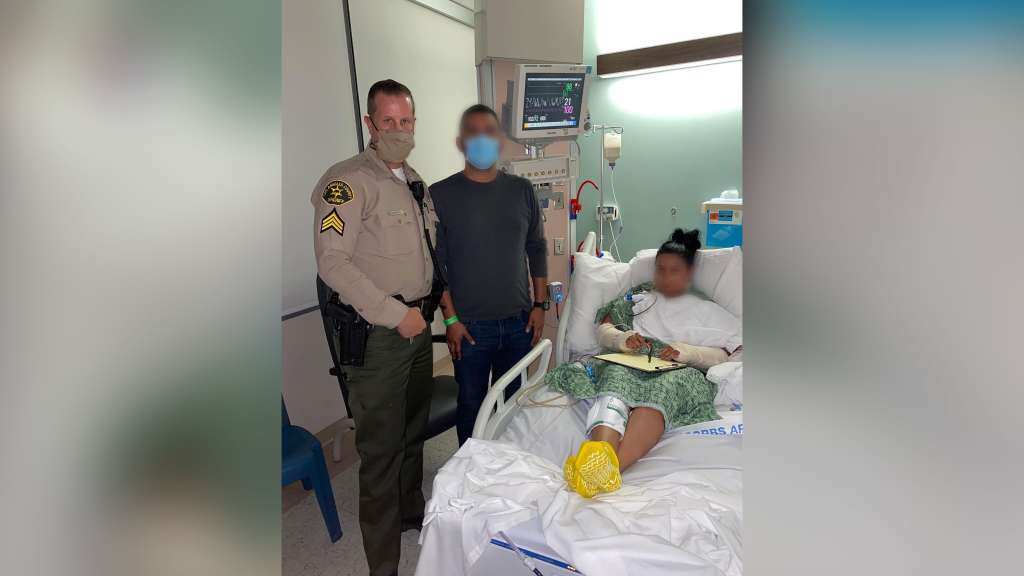 An injured Los Angeles County Sheriff's deputy speaks with President Donald Trump from her hospital bed after she and her partner were shot while sitting in their police car.
CNN

(CNN) — President Donald Trump made phone calls to the deputies injured in a Compton, California, shooting, and though one of them remains in the hospital and couldn’t speak, she wrote out her answers for the nation’s commander in chief.

The call was detailed in a Saturday afternoon Facebook post from the Los Angeles Sheriff’s Department Transit Service Bureau. It shows the 31-year-old, who was shot in the face, in bed with a writing pad in her lap. Her arms are heavily bandaged.

An LASD sergeant, one of her colleagues in the bureau, and her husband were at her bedside in an intensive care unit. The sergeant relayed her answers to Trump during the call, the post said.

The officer, who hasn’t been identified, has her face blurred, as does her husband.

“A week ago today, a callous and heartless criminal attempted to murder two of the heroes that work hard everyday to keep you safe,” the post said, adding that Trump “called both of our deputies to check on their spirits (and) wish them a speedy recovery.”

Trump also assured them the American people stood with them, and the “coward” who shot them will see justice, the post said.

The outpouring of love and support from around the world has been overwhelming, and “both of the deputies and their families were very appreciative of the call!” read the post.

In a separate Facebook post, the department shared photographs of the flowers, balloons and other gifts that have arrived for the deputies. One person sent a bouquet with a note, telling them, “Your strength is unmatched. I just want this to put a smile on your face.”

Both deputies were shot multiple times, Sheriff Alex Villanueva said. The woman’s 24-year-old partner was released from the hospital Wednesday, he said.

“He has a long road ahead for recovery. But he’s not alone. We, as a community, are in this together,” the sheriff tweeted.

The deputies will require additional surgeries, but both have promising prognoses. They are relatively new to the force, having been sworn in only 14 months ago, Villanueva said.

The department and many others are lauding the hospitalized deputy’s heroic reaction in the shooting’s aftermath: Despite suffering a gunshot wound to her face, she took her partner to cover, called for help and helped treat his wounds, applying a tourniquet to his bleeding arm.

Around dusk on September 12, the shooter — who has not been identified or apprehended — approached the passenger side of the deputies’ squad car while it was parked outside a Compton transit station. Surveillance footage shows the assailant brandish a handgun and open fire into the vehicle’s window before fleeing.

A reward for the suspect’s arrest and conviction now stands at $700,000, according to CNN affiliate KCAL. The reward has been cobbled together from public and private funds.

There have been few updates on the manhunt, but Villanueva said Wednesday that detectives “are confident they are on the right track. They’re making progress.”

The sheriff visited a communications center Saturday to thank dispatchers Janine Ramirez, Isidora Pejic and Ashley Garcia, who “played a critical role in getting (the deputies) the critical resources they immediately needed,” according to another Facebook post.

One of the deputies’ colleagues, Detective Keegan McInnis, set up a GoFundMe account that had drawn more than $700,000 in donations as of Monday morning. The money will go directly to the wounded deputies, McInnis said.

“We in law enforcement are honored to serve our communities, and the support you have shown us is a reminder of the overwhelming amount of good in this world,” McInnis wrote over the weekend.