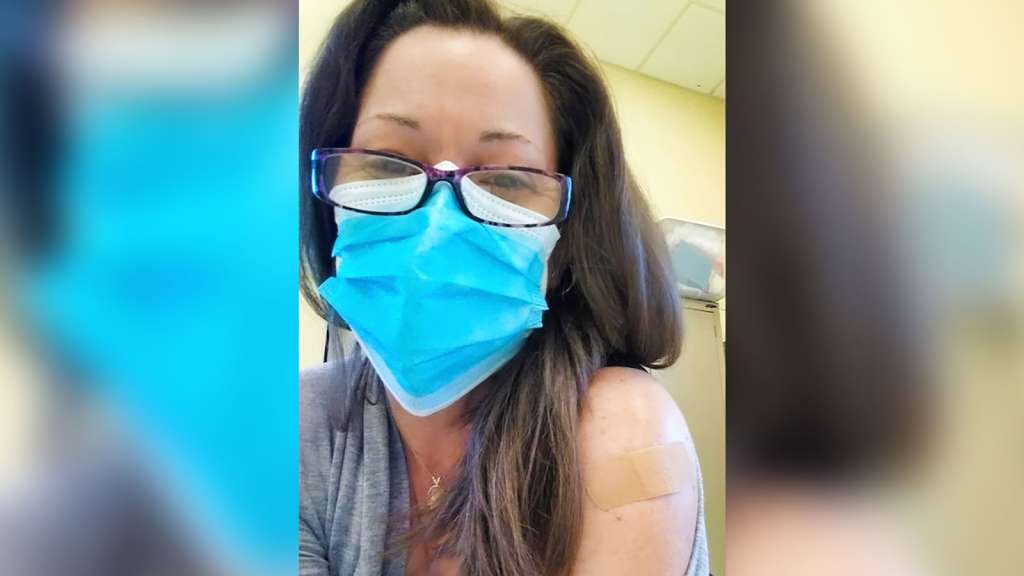 (CNN) — Jessamyn Smyth hopes that two shots in the arm may be what finally delivers her from a year in which the lasting effects of Covid-19 wreaked chaos in her life.

Smyth says that after coming down with an acute infection in March 2020, she continued experiencing a constellation of health issues. For months, she has suffered from breathlessness, irregular and rapid heartbeat, diarrhea, and unusual skin rashes. Like many “long haulers,” Smyth’s fatigue was a constant “knock-down-pass-out-for-15-hours pathological exhaustion,” she explained in an email to CNN.

A writer and humanities professor in Holyoke, Massachusetts, she had difficulty even recalling basic words she used every day, such as “punctuation.”

Her life as a scholar and an avid swimmer had crumbled.

“In the end, I lost two jobs, the end of my mother’s cognitive life and her transition into dementia care, a partner and home, all financial security—and, I feared, my life and identity as an endurance swimmer (and) athlete,” she said.

But then she got her vaccine.

Within a couple of weeks, her fatigue and cognitive issues were “noticeably better,” she said. Her rashes were gone. And after her second Pfizer dose, on February 24, her symptoms kept improving.

Stories like Smyth’s are gathering steam on social media, offering a tantalizing possibility when specialized clinics don’t seem to have the answers for how to treat them. A portion of long haulers could be having vaccine-induced relief. If so, it could be a game-changer for the growing number of people experiencing long-term health issues and even disability; 10% to 30% of those who contract Covid-19 experience long-term symptoms, according to the National Institutes of Health. However, experts aren’t yet certain about the science on why this could be happening or how long patients’ improvement might last.

In Smyth’s case, her resting heart rate, which she had often clocked at 150 beats per minute post-Covid, was back to the strong, slow throb of an endurance athlete, around 50 to 60. (Most healthy adults have resting heart rates between 60 and 100, with those on the lower end having greater protection against heart attacks, according to Harvard Medical School).

Judy Dodd is another Covid-19 long hauler, sick for a year, who is suddenly improving after her Pfizer vaccination. She might be back to 90% of how she felt before she got sick, she says.

“After my second vaccine, the next day I had a high fever, and I followed up with a couple of days of fatigue and severe headaches,” she said on CNN on Tuesday. “And then I woke up, it was a Sunday morning … day four … And it was like those coffee commercials you see and the sun is just coming up. I felt great. Attitude change. I woke up ready to go. I have energy now. The shortness of breath is gone. The headaches are gone. Mainly the fatigue is gone.”

The science is still coming together

So far, large, formal studies about vaccine recoveries are in short supply.

One recent observational study in the United Kingdom is available in preprint as it has not yet undergone peer review. It compared how those hospitalized with Covid-19 fared after vaccination versus previously hospitalized Covid-19 patients who didn’t receive their shots. Some 23% of those vaccinated reported symptom resolution, while 15% of unvaccinated participants also said they felt better.

That study had a small sample size of 44 patients, and while statistically significant, the portion who improved wasn’t very large.

“The issue is thus far that it’s anecdotal,” said Dr. Anthony Fauci, Director of the National Institute of Allergy and Infectious Diseases, during a hearing of the House Energy and Commerce Committee on March 17. “Many people get better anyway, and if you get vaccinated and get better, you are not sure whether it’s the vaccine or the spontaneous recovery. So you’ll have to do a randomized trial in order to determine that.”

Still, though, anecdotal reports can start to stack up, especially for doctors who have been treating long haulers for months.

“It’s getting to be a large number of reports, hundreds of reports of patients that we’ve been caring for with Covid almost a year now,” said Dr. Daniel Griffin, chief of infectious disease at ProHealth and an instructor in clinical medicine at Columbia University. “They are reporting that following vaccination they’re having significant, if not complete, resolution of their long Covid symptoms.”

He estimated that as many as 30% to 40% of his long Covid patients said they were feeling better after vaccinations, and the boost in energy and mental clarity appeared to be coming from all three vaccines currently authorized in the US.

CNN reached out to the three companies — Pfizer, Moderna and Johnson & Johnson — whose vaccines have been authorized in the US. A spokeswoman for Pfizer noted that the company “may capture long term symptoms in individuals who’ve had Covid” as part of its clinical trials, and that it could choose to look into the question as part of a post hoc analysis of its studies.

Figuring out why vaccines improve long Covid could be a clue into why the persistent symptoms occur in the first place.

“One of the theories to explain long Covid was that maybe there’s a subset of individuals — unfortunately a larger subset than any of us would like to believe — who could not clear the virus,” Griffin said. “But then they get the vaccine. Now they’re able to have a proper, robust immune response. That may be what it takes to clear the virus.”

That squares with what Dr. Kartik Sehgal, a medical oncologist at the Dana-Farber Cancer Institute and an instructor at Harvard Medical School, believes could be ailing long haulers.

“One of the hypotheses is that this is virus-related, meaning that viruses are hiding behind in the form of a reservoir in the body, whether the actual virus or the genetic material of the virus which is causing long lasting, low level inflammation,” said Sehgal, who co-authored a recent review article about long Covid in Nature Medicine.

Sehgal and Griffin both ventured another hypothesis: Long Covid could cause persistent immune dysfunction even after SARS-CoV-2 had left the body. From that perspective, the mRNA vaccines distributed by Pfizer and Moderna, which teach the immune system how to respond to a spike protein on the surface of the coronavirus, could represent what Griffin called a “hard reset for the immune system.”

However, anecdotal reports suggest the Johnson & Johnson vaccine, which doesn’t use mRNA, may also be instigating long Covid recoveries, and doesn’t jostle the immune systems in the same way.

Since there are reports of alll three vaccines helping some long haulers, it’s likely they’re fighting an infection, rather than fixing lingering immune dysfunction caused by the virus.

“It’s starting to get several of us thinking that maybe the viral persistence theory is the most persuasive based upon the data that we have,” Griffin said.

It’s too soon to tell, though, if vaccine remissions are permanent, or if long haulers are likely to relapse back to their same symptoms.

So far, none of Griffin’s patients who reported vaccine-induced recoveries had relapsed, but it’s still early. Through his position as a senior fellow for United Health Group, he is studying 10,000 people over five years and has built questions about the vaccine into the study’s questionnaires.

“I am very curious about the durability of this response,” he said.

Vaccine recoveries aren’t happening for everyone

But while some long haulers say they improved after the vaccine, they appear to be in the minority.

Some 347 days into his journey with Covid-19, Maneesh Juneja, a digital health consultant in the UK, has kept close track of how his symptoms switch off and on at different points over the past year.

He regularly deals with “horrible brain pressure” that makes him feel like his brain is about to “explode,” or fatigue making it feel impossible to lift his head off his pillow.

In the weeks leading up to his first vaccine dose, Juneja’s symptoms were a “mixed bag,” he explained, getting a bit of work done some days, while being totally non-functional on others.

When the day came for his vaccine, he was unlucky. His symptoms revved up again.

He argued that his experiences like his underscore the importance of more recognition and research for long Covid, as quick fixes for most patients are still fleeting.