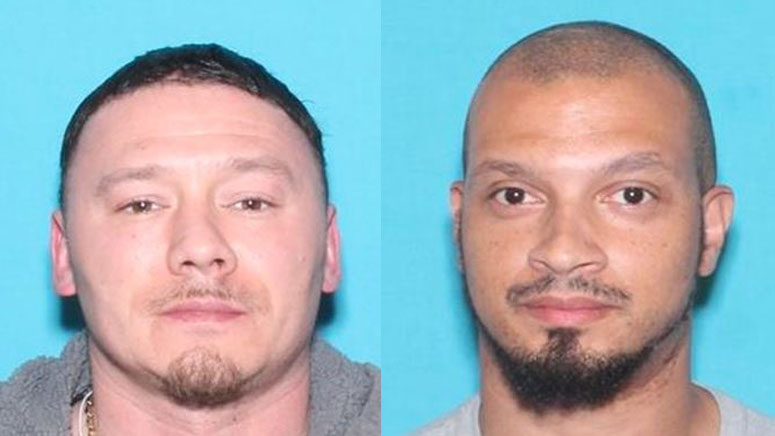 Massachusetts State Police have added two men wanted for attempted killings to the department’s list of Most Wanted Fugitives.

The suspects were added to the list on Thursday by the MSP’s Violent Fugitive Apprehension Section, which is leading the investigations with the assistance of local police.

The first suspect they added to the list is 37-year-old Jesse G. Ouellet, who is wanted on two counts of armed assault with intent to murder and firearm offenses.

Ouellet allegedly shot a man in the stomach outside S&A Market convenience store on Ward Street in Worcester following an altercation. A bystander was also struck by a stray bullet.

Ouellet is described as a white male who is 5 feet, 5 inches tall, 150 pounds, with brown hair and brown eyes. He also has many tattoos, including on both arms and shoulders, stomach, and legs.

Ouellet should be considered armed and dangerous, state police say.

The second suspect they added to the list is 40-year-old Saeed Y. Ali, who is wanted for attempted murder, aggravated assault and battery, and vehicular offenses for allegedly running down his victim with a motor vehicle.

Ali is accused of intentionally hitting a male relative of his former girlfriend as the man walked through a parking lot outside a Savers store on Memorial Avenue in West Springfield. After the initial impact, Ali then backed over the victim and then went forward again and struck him a third time.

West Springfield Police obtained an arrest warrant dor Ali, who has a lengthy criminal history including prior convictions for various assaults.

Ali is described as a black male who is 6 feet and 160 pounds, with black hair and brown eyes. He has multiple tattoos on his back and right shoulder, including a large dragon.