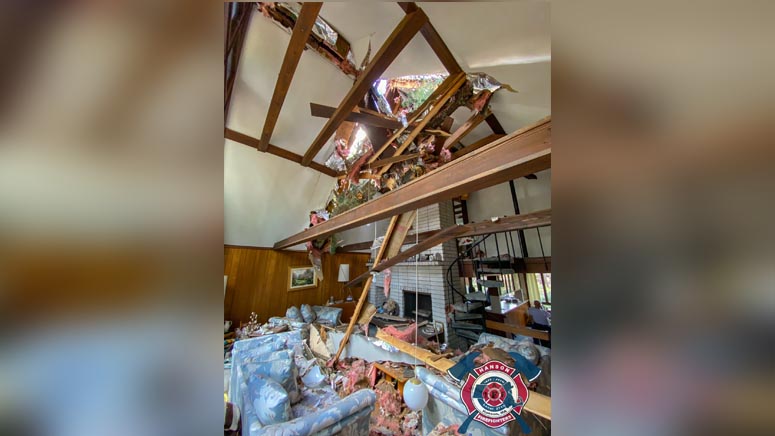 HANSON, MASS. (WHDH) - Strong wind gusts reaching up to 50 mph in some areas sent a large tree crashing down into a home in Hanson Friday.

Crews responded to the home on Maquan street where a tree had smashed through the roof and came to rest on the beams inside. The force of the impact sends wood and insulation flying down into the living room, according to a post on the fire department’s Twitter page.

One person was evaluated at the scene but no injuries were reported.

The fire department said they have been responding to a number of weather-related calls in addition to medical.

Hanson Firefighter responded to several weather related calls along with medical calls, handling 6 calls for service over the last 2 hours.
These pictures are from a tree that fell through a house on Maquan Street. The ambulance evaluated one person but no injuries were reported. pic.twitter.com/LpgUZFlW1s

Firefighters were also dispatched to an area on Beckett Street where a tree fell onto a set of power lines before landing on a car.

No injuries were reported in this case either.

This is another call handled today by Hanson Firefighters on Beckett St. A tree fell pulling wires and a utility pole down that landed on a vehicle. No injuries reported. pic.twitter.com/OwvsTRD9AJ