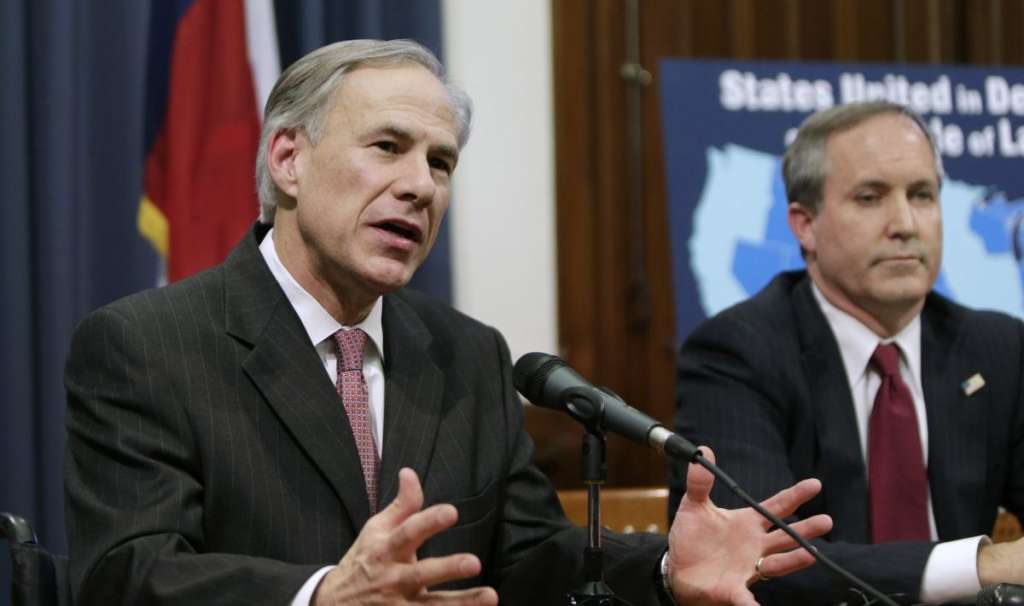 Abbott and Paxton were listed as candidates in the Republican primary that took place Tuesday. Abbott won the gubernatorial primary, and Paxton will advance to a runoff. Credit: Erich Schlegel/Getty Images/File

(CNN) — A district court judge in Travis County, Texas, granted a temporary restraining order Wednesday to prevent the state from performing a child abuse investigation of a family seeking gender-affirming health care for their transgender child.

The American Civil Liberties Union, the ACLU of Texas and LGBTQ civil rights organization Lambda Legal filed a lawsuit Tuesday on behalf of the parents of a transgender girl. The child’s mother, an employee of the state’s Department of Family and Protective Services (DFPS), had been suspended from her job because of last week’s legal opinion by Texas Attorney General Ken Paxton saying gender-affirming treatments and procedures for transgender children can constitute a form of child abuse.

Paxton’s legal opinion prompted Gov. Greg Abbott to instruct DFPS Commissioner Jaime Masters “to conduct a prompt and thorough investigation of any reported instances of these abusive procedures in the State of Texas.”

Judge Amy Clark Meachum wrote in an order that the family named as plaintiffs in the lawsuit “will suffer irreparable injury” unless the defendants — Abbott and DFPS Commissioner Jaime Masters — are restrained from investigating families of transgender children.

Without the temporary restraining order, Meachum wrote, the plaintiffs — identified as Jane, John and Mary Doe — would face “the imminent and ongoing deprivation of their constitutional rights, the potential loss of necessary medical care, and the stigma attached to being the subject of an unfounded child abuse investigation.”

Additionally, Meachum wrote that if Jane Doe, a DFPS employee, were placed on a Child Abuse Registry as a result of the investigation, she “could lose the ability to practice her profession and both Jane and John Doe could lose their ability to work with minors and volunteer in their community.”

Abbott and Paxton were listed as candidates in the Republican primary that took place Tuesday. Abbott won the gubernatorial primary, and Paxton will advance to a runoff.

According to the lawsuit filed by the ACLU and Lambda Legal, the plaintiffs are identified as clinical psychologist Dr. Megan Mooney and the “supportive” parents, “Jane and John Doe,” individually and as next friends of “Mary Doe,” a 16-year-old transgender girl who has been diagnosed with gender dysphoria. Gender dysphoria is psychological distress that results when a person’s gender identity and sex assigned at birth do not align, according to the American Psychiatric Association.

Jane Doe, an employee of DFPS, asked her employer to clarify how the governor’s order would affect the agency’s policy, according to the lawsuit. She was then placed on leave “because she has a transgender daughter with a medical need for treatment of gender dysphoria,” the suit said. DFPS Child Protective Services visited the plaintiffs’ home after being informed they were under investigation, the suit said.

Jane Doe is on leave pending the results of the DFPS investigation, court documents say. Should the investigation find the parents committed abuse, they would be put on the Child Abuse Registry “and be improperly subject to all of the effects that flow from such placement,” according to the lawsuit. Jane Doe could also face termination and, as a result, lose the family’s health care coverage, the lawsuit said.

The plaintiffs accuse Abbott and Masters of attempting “to legislate by press release” after the Texas legislature “failed to pass legislation criminalizing well-established and medically necessary treatment for adolescents with gender dysphoria.”

CNN has reached out to the governor’s office, Masters and Paxton for comment.

“Today, the Department of Health and Human Services has announced several actions to keep transgender children in Texas and their families safe — putting the state of Texas on notice that their discriminatory actions put children’s lives at risk,” Biden wrote in a statement. “These announcements make clear that rather than weaponizing child protective services against loving families, child welfare agencies should instead expand access to gender-affirming care for transgender children.”

In a series of tweets Wednesday, HHS Secretary Xavier Becerra called the Texas order “discriminatory and unconscionable,” warning “these actions are clearly dangerous to the health of transgender youth in Texas.”

Attorneys argue about the language of Paxton’s legal opinion

Meachum, of the 201st Civil District Court, heard arguments Wednesday morning from a lawyer with Lambda Legal, an LGBTQ civil rights organization, asking for the temporary restraining order as part of its lawsuit with the ACLU claiming DFPS had already begun investigating the families of transgender teens.

The attorney for Lambda Legal, Paul Castillo, argued his clients face immediate and irreparable harm from the investigations. He said he’s aware of at least two other families, in addition to the family mentioned in the lawsuit, who are facing investigations.

Ryan Kercher, an attorney with Paxton’s office, argued the state is not seeking to investigate “every trans youth or every … young person undergoing these kinds of treatments and procedures.” Kercher argued the opinion’s language is intentionally “couched” to say that this kind of health care “could be” or “can be” a form of child abuse, especially if there is a “lack of consent.”

The judge said she’ll issue her decision later Wednesday after fully reviewing the arguments and documentation.