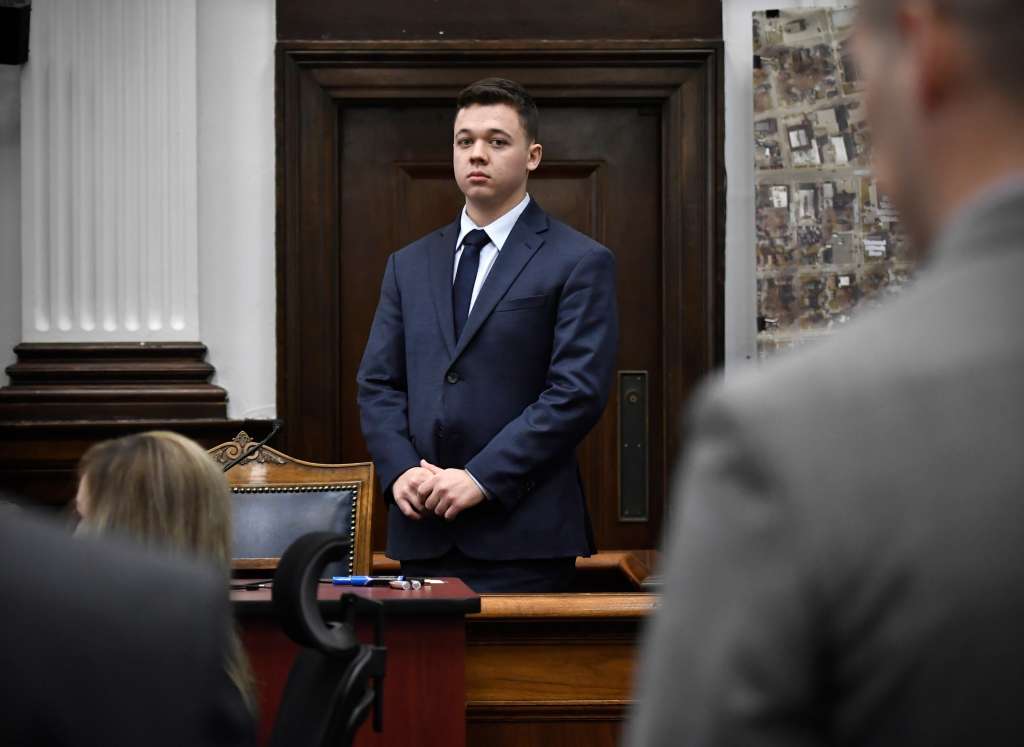 Kyle Rittenhouse waits for the jury to enter the room to continue testifying during his trial at the Kenosha County Courthouse in Kenosha, Wis., on Wednesday, Nov. 10, 2021. Rittenhouse is accused of killing two people and wounding a third during a protest over police brutality in Kenosha, last year. (Sean Krajacic/The Kenosha News via AP, Pool)

(CNN) — Kyle Rittenhouse on Friday was acquitted on the charges against him by a jury in Kenosha, Wisconsin.

The 12 jurors had considered five felony counts against Rittenhouse. A misdemeanor weapons charge was dismissed by the judge as proceedings opened Monday morning.

Using an AR-15-type rifle, he killed Joseph Rosenbaum, 36, and Anthony Huber, 26, and wounded Gaige Grosskreutz, 27, during street demonstrations over the police shooting of Jacob Blake.

Here are the counts the jury weighed:

First-degree reckless homicide, use of a dangerous weapon

The judge denied a prosecution request for the jury to also be instructed on second-degree reckless homicide.

Rittenhouse testified he acted in self-defense when he fatally shot Rosenbaum after the man threw a plastic bag at him and chased him.

“I didn’t do anything wrong. I defended myself,” he testified.

Under cross-examination, Rittenhouse said he knew Rosenbaum was unarmed. He said he pointed his rifle at Rosenbaum in an attempt to deter him and acknowledged it was dangerous.

“If I would have let Mr. Rosenbaum take my firearm from me, he would have used it and killed me with it and probably killed more people,” he testified.

Rittenhouse broke down in tears at one point, leading to a short break.

“I think it was a game changer to put him on the stand,” CNN legal analyst Joey Jackson said. “Number one, you humanize him… More important, number two, he explained his uses of force.”

The “biggest issue” is whether the jury finds Rittenhouse credible, he told CNN. “Secondly, do they believe then that it equals he reasonably feared death or great bodily harm?”

Wisconsin law allows the use of deadly force only if “necessary to prevent imminent death or great bodily harm.”

“Whether he engaged in self-defense and did so reasonably and thought his life was in immediate danger … that’s what the jury has to assess ultimately,” Jackson said of Rittenhouse.

Prosecutors also requested the jury be given instruction on provocation. They argued Rittenhouse provoked Rosenbaum by raising his gun and pointing it at somebody, which led to the victim running after him.

The judge agreed to allow the panel to consider whether Rittenhouse provoked Rosenbaum into attacking him — thus negating self-defense.

Ellie Honig, a CNN senior legal analyst and a former prosecutor, said the provocation instruction was an important win for the prosecution.

Honig said the instruction allows prosecutors to argue “the defendant went too far, used deadly force when it wasn’t reasonably necessary” and he “provoked the attack, and hence cannot argue self-defense.”

First-degree recklessly endangering safety, use of a dangerous weapon

Count 2 states Rittenhouse recklessly endangered the safety of Richard McGinniss — a journalist with the conservative Daily Caller — under circumstances that show utter disregard for human life.

The state asked that the jury also be instructed on second-degree recklessly endangering safety. Schroeder said he was inclined to give the additional instruction on the lesser charge.

The judge told Rittenhouse presenting lesser offenses lowered the possibility of a second trial but increased the risk of a conviction.

“A lot of times … the jury gets into a heated discussion about whether he’s guilty or not guilty of intentional conduct,” said CNN legal analyst and former prosecutor Paul Callan.

First-degree recklessly endangering safety, use of a dangerous weapon

Count 3 states Rittenhouse recklessly endangered the safety of an unknown male, referred to as “jump kick man” in court, under circumstances that show utter disregard for human life.

The man jumped at Rittenhouse at one point, trying to kick him and the teen opened fire. “I thought if I were to be knocked out, he would have stomped my face in if I didn’t fire,” he said.

Rittenhouse fired at the man twice and missed.

First-degree intentional homicide, use of a dangerous weapon

Count 4 states Rittenhouse caused the death of Huber, with intent to kill him. It’s the most serious charge he faces, with a mandatory life sentence. Huber swung his skateboard at Rittenhouse after Rosenbaum was fatally shot.

Attempted first-degree intentional homicide, use of a weapon

Count 5 states Rittenhouse attempted to cause the death of Grosskreutz, with intent to kill him.

Grosskreutz testified he pulled out his own firearm because he believed Rittenhouse was an active shooter.

Grosskreutz said he and a crowd followed Rittenhouse, who had just fatally shot another man. Rittenhouse fell to the ground, fired twice at an unknown person and then fatally shot Huber.

Grosskreutz, just feet away, put his hands in the air, videos show. He testified he then saw Rittenhouse rerack his weapon — a motion that loads it for gunfire.