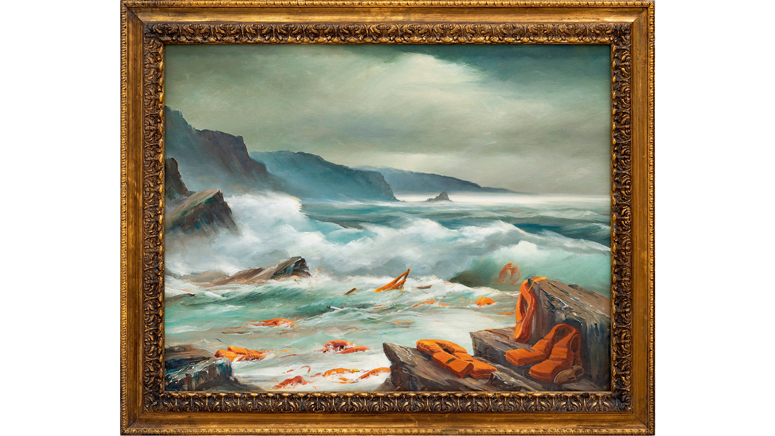 (CNN) — Three Banksy paintings have been sold at auction for $2.9 million, with proceeds earmarked for a Palestinian hospital.

The “visual amendment…evokes mass death at sea,” according to Sotheby’s, which auctioned the paintings on Tuesday in London.

“Though posing as eighteenth or nineteenth-century paintings of the ‘Natural Sublime’, the present work undermines and subverts the viewer’s expectations to broach a difficult contemporary issue,” the auction house added.

The 2010s were marked by countless refugees attempting to cross the Mediterranean Sea on boats and makeshift rafts to escape armed conflict or social unrest. While many arrived in countries like Italy and Greece, thousands died at sea. The migrant crisis was declared over in March 2019, but refugees still attempt the perilous journey.

Banksy’s paintings, which fetched far more than the expected price of $1 million to $1.5 million, were previously displayed in the lobby of the Walled Off Hotel, which the artist opened in Bethlehem in 2017 to draw attention to the Israeli-Palestinian conflict.

The paintings were donated to ABCD Bethlehem, a nonprofit group that supports Palestinian children with disabilities. The proceeds from the auction will go toward building an acute stroke unit and purchasing children’s rehabilitation equipment for Bethlehem Arab Society for Rehabilitation (BASR), a provider of medical, surgical and rehabilitation services in the Palestinian Territories.

The England-based artist has addressed the migrant crisis in numerous works, including a 2016 portrait of Apple’s late founder and CEO Steve Jobs holding an original Apple computer in one hand and a black sack thrown over his shoulder in the other. The painting appeared in Calais refugee camp in France.

Banksy said at the time that the portrait was meant to dispel misconceptions about migrants. “We’re often led to believe migration is a drain on the country’s resources but Steve Jobs was the son of a Syrian migrant,” the artist said. “Apple is the world’s most profitable company, it pays over $7bn (£4.6bn) a year in taxes — and it only exists because they allowed in a young man from Homs.”