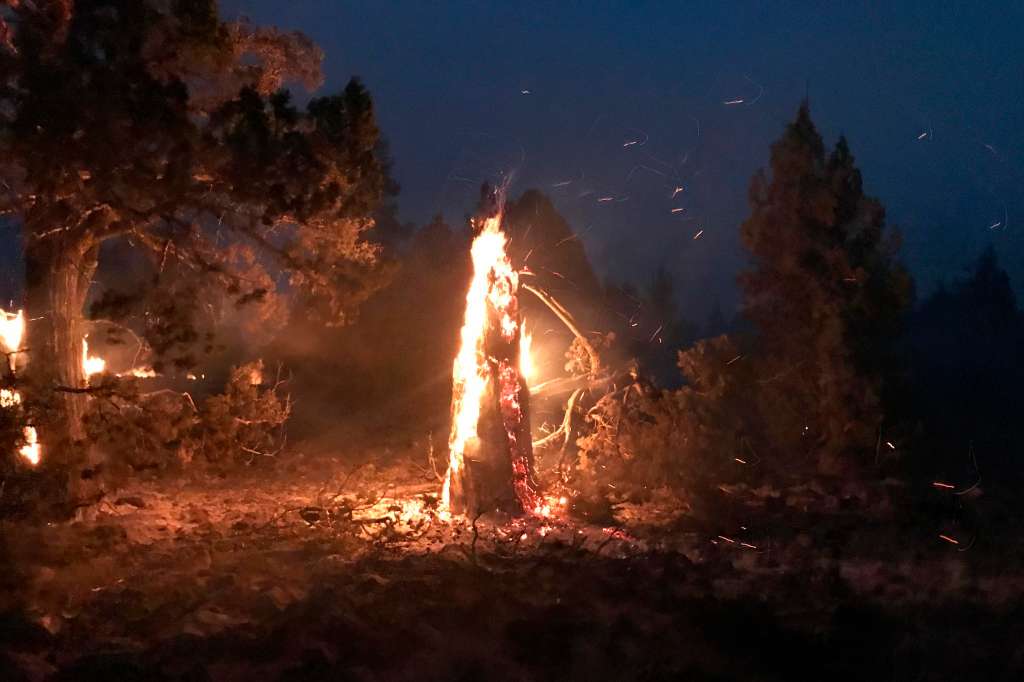 In this photo provided by the Bootleg Fire Incident Command, the Bootleg Fire burns at night near Highway 34 in southern Oregon on Thursday, July 15, 2021. Firefighters scrambled Friday to control a raging inferno in southeastern Oregon that's spreading miles a day in windy conditions, one of numerous wildfires across the U.S. West that are straining resources. The Bootleg Fire, the largest wildfire burning in the U.S., has torched more than 377 square miles (976 square kilometers), and crews had little control of it. (Jason Pettigrew/Bootleg Fire Incident Command via AP)

The Bootleg Fire was just one of numerous wildfires burning across the U.S. West.

Crews had to flee the fire lines of the Oregon blaze late Thursday after a dangerous “fire cloud” started to collapse, threatening them with strong downdrafts and flying embers. An initial review Friday showed the Bootleg Fire destroyed 67 homes and 117 outbuildings overnight in one county. Authorities were still counting the losses in a second county where the flames are surging up to 4 miles (6 kilometers) a day.

The conflagration has forced 2,000 people to evacuate and is threatening 5,000 buildings, including homes and smaller structures in a rural area just north of the California border, fire spokeswoman Holly Krake said. Active flames are surging along 200 miles (322 kilometers) of the fire’s perimeter, she said, and it’s expected to merge with a smaller, but equally explosive fire by nightfall.

The Bootleg Fire is now 377 square miles (976 square kilometers) — larger than the area of New York City — and mostly uncontained.

“We’re likely going to continue to see fire growth over miles and miles of active fire line,” Krake said. “We are continuing to add thousands of acres a day, and it has the potential each day, looking forward into the weekend, to continue those 3- to 4-mile runs.”

A Red Flag weather warning was issued for the area through Saturday night.

The inferno has stymied firefighters for a week with erratic winds and extremely dangerous fire behavior, including ominous fire clouds that form from superheated air rising to a height of up to 6 miles (10 kilometers) above the blaze.

“We’re expecting those same exact conditions to continue and worsen into the weekend,” Krake said of the fire-induced clouds.

It’s burning an area north of the California border that has been gripped by extreme drought, like most of the American West.

Extremely dry conditions and heat waves tied to climate change have swept the region, making wildfires harder to fight. Climate change has made the West much warmer and drier in the past 30 years and will continue to make weather more extreme and wildfires more frequent and destructive.

The blaze was most active on its northeastern flank, pushed by winds from the south toward the rural communities of Summer Lake and Spring Lake. Paisley, to the east of the fire, was also at risk. All the towns are in Lake County, a remote area of lakes and wildlife refuges with a total population of about 8,000.

The Bootleg Fire is one of at least a dozen major fires burning in Washington state, Oregon and California as a siege of wildfires takes hold across the drought-stricken West. There were 70 active large fires and complexes of multiple fires that have burned nearly 1,659 square miles (4,297 square kilometers) in the U.S., the National Interagency Fire Center said.

In the Pacific Northwest, firefighters said in early July they were facing conditions more typical of late summer or fall.

In California, the Tamarack Fire in the Humboldt-Toiyabe National Forest quickly grew to 2.5 square miles (6.5 square kilometers) on Friday, prompting evacuations in the Markleeville area in Alpine County. The blaze prompted the cancelation of Saturday’s “Death Ride,” a 103-mile (165.76-kilometer) bicycle ride in the so-called California Alps over three Sierra Nevada mountain passes.