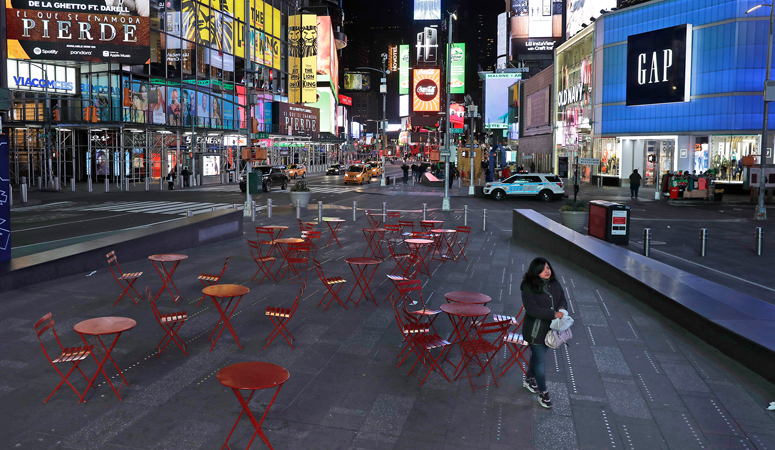 A woman walks through a lightly trafficked Times Square in New York, Monday, March 16, 2020. Bars and restaurants will become takeout-only and businesses from movie theaters and casinos to gyms and beyond will be shuttered Monday night throughout New York, New Jersey and Connecticut because of the coronavirus, the states' governors said. (AP Photo/Seth Wenig)

(CNN) — The number of Americans who have died from the novel coronavirus in the United States has reached 100, according to a CNN tally of data from state heath officials.

Illinois reported its first death Tuesday, becoming one of 18 states to report the death of a resident who died from the virus in the pandemic.

The grim milestone comes as health officials tout a consistent message: Limit your interactions now or overwhelm the health systems meant to take care of you.

As these measures are taking hold, the Trump administration is exploring ways to send money directly to Americans, possibly within two weeks, in a bid to curb the economic fallout, Treasury Secretary Steve Mnuchin said Tuesday.

While the White House has suggested limiting gatherings to 10 people or fewer, state and local officials are giving orders for an altered American reality as the number of coronavirus cases across the United States surpasses 5,130.

• About 7 million people in and around San Francisco have been told to “shelter in place,” generally requiring them to stay inside and leave only for essential needs.

• Ohio called off its presidential primary hours before polls were to open Tuesday, though Florida, Arizona and Illinois still were holding theirs.

• States including New York, New Jersey, Connecticut, Ohio, Michigan and Wisconsin put a ban this week on gatherings of 50 people or more. Some of these are closing restaurants, though some are allowing drive-thru and pickup service.

• Florida Gov. Ron DeSantis said Tuesday the state was allowing no more than 10 people to gather on beaches statewide.

• Miami says that, by Wednesday, it will close all entertainment businesses, such theaters, as well as fitness centers. Dine-in restaurants may sell food for takeout or delivery.

Public health officials say the US has reached a tipping point — warning that if residents don’t take the call to action seriously, the country may approach the situation in Italy, which went on total lockdown last week and where hospitals have been overwhelmed with more than 24,000 cases.

The faster the disease spreads, the faster physicians will get sick, leading to a difficult scenario, Dr. Carlos Del Rio, a professor at Atlanta’s Emory University School of Medicine, told CNN Tuesday.

“I’m really worried about … having the worst possible combination: too many patients; too (few) doctors, nurses … to take care of them.”

“Stay home. Do not leave,” Del Rio said. “The economic pain is going to be significant, but we can stand it as a nation. We can do it for a month and stand it.”

In Washington, Mnuchin expressed some support for an idea gaining backing among lawmakers: sending $1,000 checks to Americans. It will be discussed in Capitol Hill meetings, he said.

“I think it’s clear we don’t need to send (checks to) people who make $1 million a year … but that’s one of the ideas we like,” Mnuchin said in a news conference with President Trump and other officials.

Stock indices were up Tuesday afternoon, a day after the Dow saw its worst one-day point drop in history.

And while more large events are being moved — the Kentucky Derby is being postponed from May 2 to September 5 — and the credit agency S&P Global says the world economy is in a recession, Amazon says it is hiring 100,000 more workers to keep up with online shopping surges.

It should be weeks before we see a peak, Dr. Anthony Fauci says

The federal government released a new set of guidelines Monday for the next 15 days to fight the spread of the virus. One part of those guidelines: steering clear of groups with more than 10 people.

How soon that could help the country reach its peak in cases is up for debate.

On Tuesday at the White House, a reporter asked when the number of US cases could peak if the public adheres to social distancing.

“It probably would be several weeks or maybe longer before we know whether we had an effect,” Dr. Anthony Fauci, director of the National Institutes of Allergy and Infectious Diseases, said. “And maybe, at the end of the day, we’ll see a curve that would’ve been way, way up.

Fauci said persuading younger people — who researchers say may be less likely to show symptoms but still be able to pass on the virus to more vulnerable people — to stay out of gathering places such as bars and restaurants was key.

He hopes to say sooner rather than later that “we’ve seen that inflection and we’re coming down,” Fauci said.

The federal guidelines came largely after governors across the country signed new orders and directives in response to the virus — and called on the federal government to step up its efforts.

President Trump said Tuesday this administration was “starting the process” of examining the Army Corps of Engineers’ potential role.

Department of Health and Human Services officials said in a call with medical professionals Monday there isn’t enough stockpiled medical equipment such as masks, gowns and gloves in the national stockpile to fill in the gaps that states and local communities may see, a source on the call told CNN.

“Those industrial masks that they use on construction sites are perfectly acceptable for health care workers to be protected from a respiratory disease,” Pence said.

HHS officials said the government didn’t yet have a solution for possible equipment shortfalls but was working on one.

“We have been transparent that more supplies are needed — hence the request to Congress for additional funding so we could procure more and scale up production,” an HHS spokesperson said in a statement to CNN.

One Georgia hospital ripped through months’ worth of supplies while tending to coronavirus patients, its president has told CNN.

Scott Steiner, president and CEO of Phoebe Putney Health Systems, told CNN that despite being well prepared in terms of protective gear — with six months’ worth of inventory stockpiled — the system has gone through five months’ worth of that inventory in just six days.

The mayor of New York said he will limit all bars, restaurants and cafes to takeout or delivery services.

“You have to think of this as something where you’re going to see a massive mobilization to save lives, to help people through their suffering with this disease,” Mayor Bill de Blasio said Monday.

In San Francisco, Mayor London Breed issued “shelter in place” guidance Monday, requiring the city’s residents to stay inside and leave only for things such as grocery shopping, and going to the police, banks, gas stations and pharmacies.

“This is going to be a defining moment for our city and we all have a responsibility to do our part to protect our neighbors and slow the spread of this virus by staying at home unless it is absolutely essential to go outside,” Breed said.

Public health officials in Colorado ordered restaurants, bars, gyms, theaters and casinos to close their doors for 30 days. Facilities will still be allowed to sell food and beverages through options like drive-thru and delivery services.

“Based on the experience of other countries, the state of Washington and modeling data, the sooner we begin social distancing measures on a large enough scale, the more quickly we can slow transmission of the virus,” Colorado Department of Public Health and Environment Executive Director Jill Hunsaker Ryan said.

Similar orders were issued in states including Michigan, Maryland, Kentucky, Louisiana and Indiana.

Meanwhile, states such as New York, New Jersey, Connecticut, Michigan, Ohio and Wisconsin put a ban this week on gatherings of 50 people or more.

The US Centers for Disease Control and Prevention on Sunday recommended no gatherings with 50 people or more take place for the next eight weeks.

The CDC also said last week closing schools for eight weeks or more may have a great impact on curbing spread of the virus, compared to two- and four-week closures.